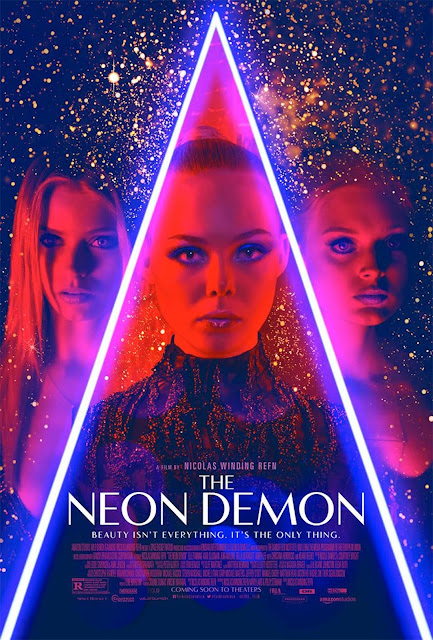 The Neon Demon is the last film I needed to watch before casting my votes in the Fright Meter Awards 2016 finals. It is up for best cinematography, best soundtrack, while Jena Malone who plays Ruby is up for best supporting actress. I had heard this film (written and directed by Nicolas Winding Refn of Drive fame) was divisive when it came out, I usually enjoy arty ones such as this so I figured I would probably enjoy it.

Sixteen year old Jesse (Elle Fanning from Super 8) has newly arrived in Los Angeles hoping to make it big as a model. Everyone who sees her is blown away by her looks and it seems her success is a sure thing, however there are also those who are envious of her natural beauty and will do anything to ensure she is not a threat... 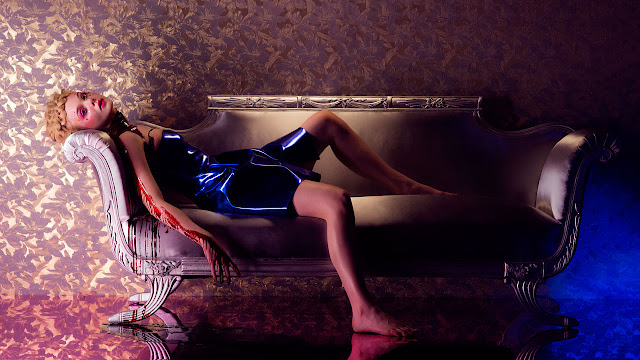 From the little I knew of this movie I expected it to fall into the style of dark drama that Black Swan exemplified. However while that had a lot of the drama come from the fact the main character was in total melt down, here there is a weird sense of perpetual threat and unease that continues no matter how innocent the events on screen appear. It immediately impressed with a synth soundtrack that sounds amazing, this was coupled with beautiful imagery, a great use of bright violent colours that echoed Kubrick, and a stunning first sequence. While the soundtrack remains pretty great throughout, these stand out moments of design are intermingled in with more down to earth sequences, making them a treat whenever they appeared. It helps that The Neon Demon is about modelling as it gives plenty of excuses to show artful scenes of static images.

So...that's the good bit out the way, now on to what I did not enjoy about this film. My main issue is with how dull it is, pretty much all the way up to the finale nothing much really happens. Jesse has several trippy dream sequences, she hangs out with an amateur photographer who is besotted with her, has small tension filled scenes with her colleagues, but that's about it. There was a constant sense of threat as I mentioned earlier, but this feeling felt misjudged. Nothing bad was happening so after a while it came to irritate, I wish that more threat could have been shown as I found myself getting quite bored by the lack of anything occurring. Eventually it does get going and to be fair features some pretty brutal scenes, but the build up was tedious. 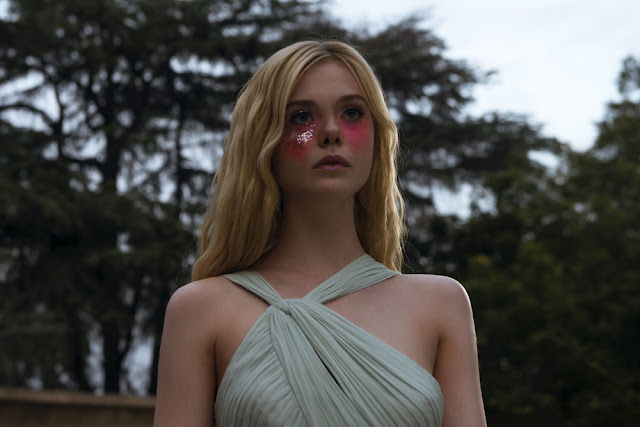 Fanning's character I found to be a bit confusing, I was never sure just what was going on in her mind, it was like watching an object, I couldn't tell if she was either secretly manipulative or innocent. Her comments about her mother calling her 'dangerous' had me hoping there would turn out to be something different, yet as it is she is pretty much a blank slate and so I could not care about her. The other actors are all fine, none really stuck out, aside that is from Keanu Reeves. This is the first film I have ever seen where it appears Reeves can actually act, he was great as the side character of a sleazy motel owner, he impressed me for the first time ever.

For all its style, for all the stunning music there was just a lack of excitement to The Neon Demon. It eventually gets its moments of horror that ramps it up from just a dark drama, but the symbolism of the modelling world being a harsh place felt obvious, and the execution just too slow and meandering for me to enjoy this too much despite featuring some admittedly stunning scenes.