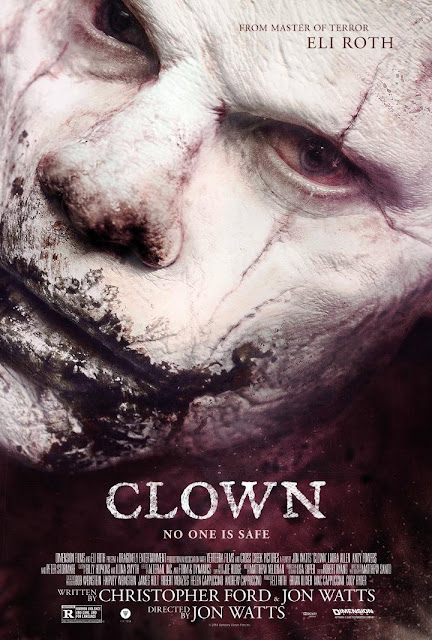 Clown is up for nomination for the 2016 Fright Meter Awards in the 'best makeup' category so as a member of the committee I had to see it. It always seems so fashionable to say your afraid of clowns, personally I have never had a problem with them, my strongest childhood memories of clowns is Roger Moore dressed up as one in the classic James Bond film Octopussy, so maybe that's why I associate them with the side of good. This horror is directed by Jon Watts (who directed the new Spiderman film that is due out later this year), and as the advertising screams at you everywhere this film had the backing of horror master Eli Roth (Hostel, Cabin Fever) who is one of the producers. This is another film that was made a few years back but has only recently seen a U.S release.

The horror all starts off with the very best of intentions when mild mannered Kent (Andy Powers) decides to dress up as a clown for his son Jack's 10th birthday party, after the clown Kent's wife Meg (Laura Allen) had booked cancels at the last moment. The problems starts after the party is over when realtor Kent discovers he is unable to take off the old costume he had discovered in one of the houses he was in charge of. At first it is almost amusing, but the longer he wears the costume the more he begins to transform into something monstrous, something with a taste for children... 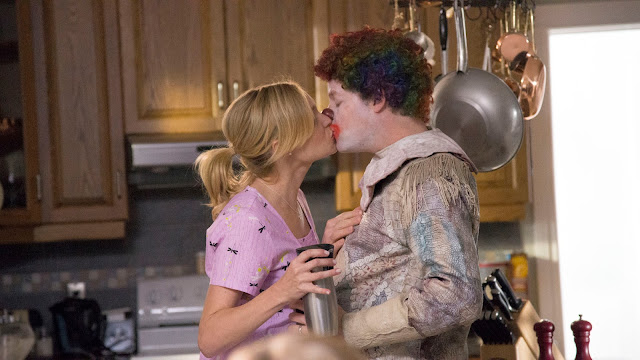 Well this is quite a strange film to review in the way it plays out, yet is similar in scope to other transformation films such as Septic Man and Bite in portraying a protagonist who slowly looses the battle for their humanity. Initially we follow Kent and his attempts to remove the suit, then later his investigation to find out who exactly it used to belong to. At around the halfway point of the movie the focus then shifts to his wife Meg and her attempts to understand what has happened, and her hunt for her now very mutated husband. I enjoyed the black humour of the first half, Kent was likeable enough as a character, though to have him more fleshed out would have been nice as he puts on the clown make-up and clothes several minutes into Clown so we don't get a good idea as to his character, other than a few quips Meg's father says. Meg on the other hand starts off as a decent character, while it is obvious she loves Kent and will do almost anything for him she becomes less and less believable with the way she reacts upon discovering his trail of carnage. Other than that the only really memorable character is Peter Stormare (Until Dawn) as Karlsson, he plays kind of a Dr Loomis (Halloween) role with some good scenes.

The subject matter and back story on just what is happening to Kent was quite interesting, a quick Google search showed the explanation doesn't seem to be based on a real myth which I geekily admit disappointed me. In the film the slow reveal of the clown transformation wasn't bad, it reminded me a bit of Bite in that the drastic change mostly occurs off screen. There is lots of blood, and violence with at least one decapitation, multiple severed limbs, and some fingers bitten off, all fun but I only winced on one occasion involving a box cutter. 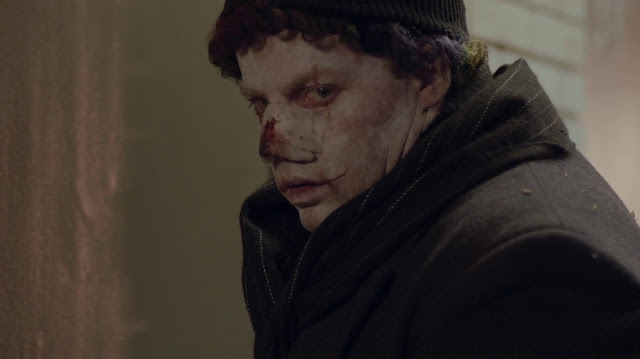 As the film is based around child death I did not expect to actually see any of it, but it is quite fun that at least the aftermath is shown, and in a few cases the actual death itself. Normally of course that would seem too dark, but in the context of a film about a monstrous clown it is fitting. The general theme of Clown could easily be inferred to actually be about paedophilia, the way Meg wants her son away from his father, the lead up for some of the kills, the locations chosen for the film (woodland, playgrounds for instance), even the way Kent feels compelled to get close to children despite knowing it's wrong, all fit that sick subject. Of course you could just see it as a monster movie which also works fine.

This is well directed with some great framing used to make Kent seem quite ominous, there were at times some leaps of logic, especially concerning how he seems to get around the town with no problem when he is a person of interest to the Police. Overall though this was entertaining if a little predictable, solid makeup and set design, and the actors did the best they could with the roles they were given, though there are a fair amount of child actors who don't do as good jobs. Entertainment of a clown based nature to be found here then, a weird idea for a movie but it works.