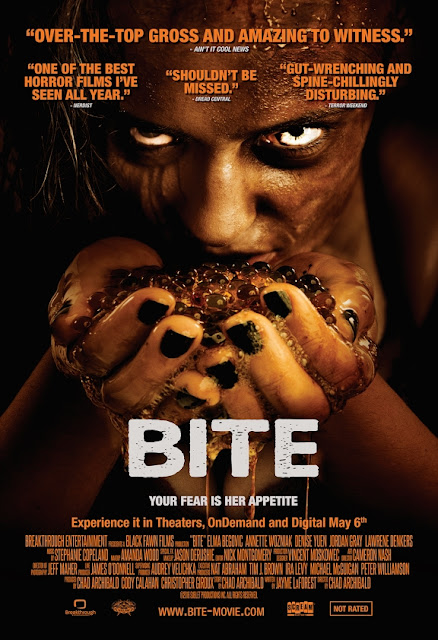 I really do not like insects in horror, I feel they are a lazy way to induce chills, and rather than scare they instead just gross me out. Bite is a film about insects, yet they never really come to the forefront of what transpires on screen so I can almost accept this. The story for this is by Chad Archibald (The Drownsman) who also directed.

While on a bachelorette party in Costa Rica Casey (Elma Begovic) gets bitten by something while swimming. She thinks nothing of it and returns home to her life where she is due to reluctantly marry her landlord's self obsessed son Jared (Jordan Gray). Instead of healing, the bite she got continues to grow in size and leak viscous fluid making Casey more and more ill. As her condition worsens she begins to physically change, becoming more insect like and vomiting up eggs... 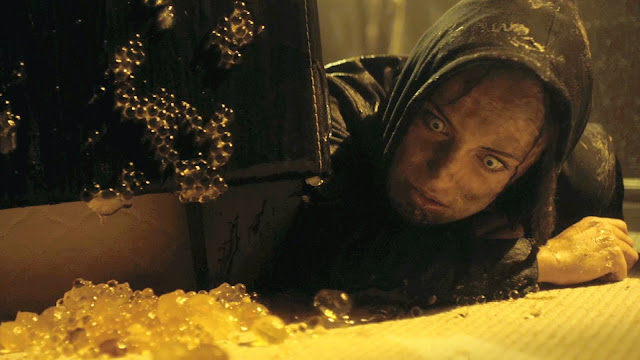 When Bite first started I was worried, it starts off all found footage, a shaky camera showing the Costa Rica trip, as I often say that style of film making has gotten tiring this century. This turned out just to be a false start though as once the prologue is over the film settles down into a more traditional style with flashbacks being the only time the handheld style of filming is used. This actually worked well as there were several plot twists that are slowly drip fed throughout Bite, made more personal by the filmed footage method of showing that.

There is a lot of symbolism throughout the movie, Casey herself is trapped in a relationship she has kind of slept walked into. Her fiance Jared has their future all planned out regardless of what she wants, he is self centred and dominated by his bullying mother. The mother herself is very controlling, with an obvious dislike of Casey. She is not only trapped in this destructive environment, but literally as well, living in an apartment building where they also both live she has no way to truly get away from them. Later on in the film when the body count begins to rise she in turn traps people in her apartment, like she is echoing her inner turmoil to anyone she can. This is a film where there are no characters who are only monsters or victims. Casey physically is a monster, mentally she is a victim, while the poisonous people in her life while human in look are internally monsters in the way they think and act. With the exception of one character there are no innocent victims here. 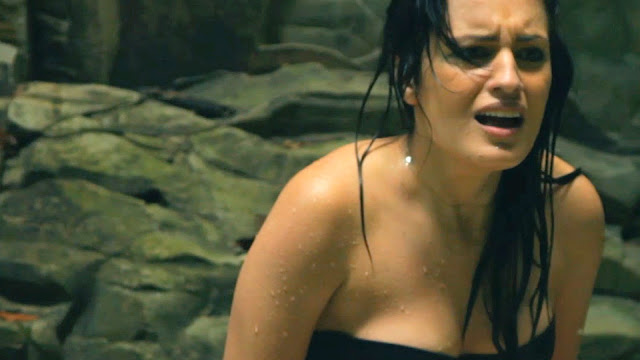 So this has made it as a finalist in the 2016 Fright Meter Awards for best makeup and it isn't that hard to see why. Throughout the ooze and eggs that constantly come off of Casey are really disgusting to witness. Her slow transformation mostly occurs off screen but the changes look pretty great with her getting pretty monstrous in appearance, even with a barbed tail of some type. Deaths are varied, the best looking one had a victim get a face of acid, a gruesome death scene there! The set design is also really well done with Casey's apartment looking like a nest from the Alien franchise by the end, the walls and floor dripping goo, fish type eggs everywhere. Thankfully there really are not many insects in this film at all, so while quite gross I was never repulsed.

The plot is simple enough, it all ends in a really fun finish at the very least. I found similarities between this and Septic Man in the way the main lead transforms into something evil, but here there is more going on. Begovic certainly is better at acting frightened and lost than she is when the script calls for her to be bad as she comes across as a bit too dramatic. It was interesting that there were no real hero types here, gave a strange feeling in the final encounter when I didn't really care for either side. Still the pacing is decent enough, especially considering the majority of Bite takes place in the one location, and I like how there is never an explanation given for what caused all the horror in the first place.

Bite is a well made horror with some great special effects, however for me the subject matter was a bit away from my usual tastes, and it could be said some of the symbolism is a bit too heavy handed. Still, I didn't find this boring and I did get quite immersed in it.