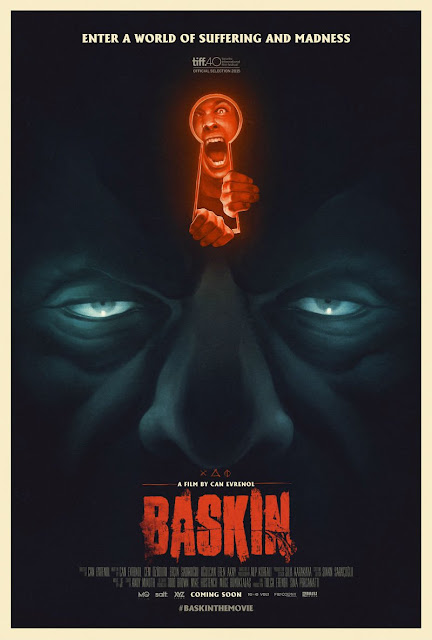 As Baskin is a finalist in the makeup category for the 2016 Fright Meter Awards I had to give it a watch. I thought that rather than illegally download this I would instead do the honourable thing and buy it. Now the English DVD was ridiculously expensive and so I decided to buy an Italian import that was half the price. Somewhat arrogantly I assumed there would be an option of English subtitles for this Turkish horror...there wasn't, and so I had no idea what was happening, this confusion will be reflected in my review.

So the story as I saw it was thus; a group of policemen get called to a disturbance at a large abandoned building. On the way their driver accidentally hits something and the police van crashes into a river. Thanks to some homeless people the gang meet they eventually get to the building, but inside all literal Hell breaks loose... 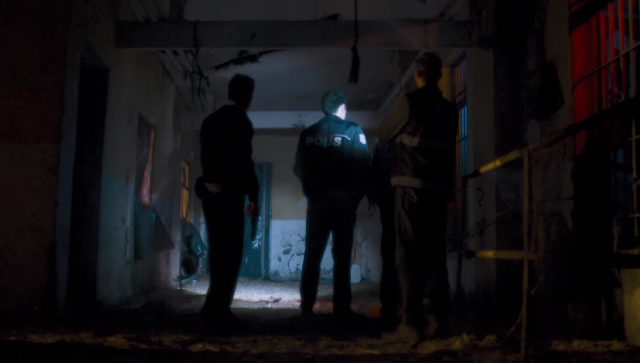 I have a sneaking suspicion that just as I hit play on the DVD I somehow inexplicably ingested a high dose of LSD, I then had a bad trip that lasted the exact duration of this film, coming back to my senses conveniently as the end credits rolled. That is the most logical explanation for the bat-crap craziness that occurred in Baskin. I had hoped this would be mostly high action with little dialogue, instead it is almost the opposite. Starting off with a slightly Tarantino-esque diner scene where I assume we get to know the personalities of the five police officers, the action then shifts to a sing-a-long in a van.

Once the group got to the complex they were (presumably) told to go to I expected there would be plenty of traditional exploration and clue finding, instead things go south fast. The whole middle section of the film lasts around ten minutes. As is the way with horror films the group get separated but each in their own way collapse immediately under pressure. Upon finding a collection of screaming goons in a shower room one cop panics and drops his gun, elsewhere another cop starts firing blindly at the ceiling when he finds a similar situation. This section of the film plays out so swiftly, I have to say it felt refreshing for the heroes to act in this manner when seeing the things they see (lots of dead bodies hanging from chains and people being cut up mostly) rather than the usual cool headed movie way. The final third of the film goes Hostel in nature with a strange disfigured baby faced cult leader torturing the survivors, this part involves someone having sex with a crawling woman wearing a goats head!

Whether this was all meant to be a trip into actual Hell or not I'm not completely sure. There were strong supernatural elements such as locations suddenly shifting, crazy dream sequences (including a fantastic looking one where a room becomes submerged), and even a dead man having a tarantula crawling out of his mouth for no reason. It was all fun to watch but with the large amount of dialogue I felt I was missing out something tremendous. The special effects are indeed great, at one (very sharp) point for instance someone gets a dagger thrust into their eyeball in great Fulci fashion, elsewhere intestines are pulled out, throats are cut and people are bopped over the head with the business end of a sledgehammer. The demonic creatures/mutants look like a combination of Silent Hill and Hellraiser monsters; all chains, bondage gear and screeching.

This is all wrapped up with some great directing, and plenty of frogs. It is hard to judge the acting quality but the actual look of the film is very nice, the camera work is attractive and well shot. There are some instances that this feels very much like a modern day Fulci film, I wouldn't be surprised if that particular master's style was an inspiration. Look, this is probably a better film when you can understand what is happening, I was Baskin for trouble trying to make sense of it all. If you get to see this with suitable subtitles (or just speak Turkish) then maybe add on a couple of 'zombie heads' to my score, otherwise be prepared for a beautiful, haunting but ultimately baffling nightmare which I can't help but feel looses steam a bit towards the end.

After writing this review I had a read of the plot on Wikipedia, I did get the basic gist of what happens correct, but I did indeed miss out on a lot of the surreal nature of the script. Also it turns out that the baby faced man is played by Mehmet Cerrahoglu who in real life has a rare skin condition and so no special effects were used for his look.
Posted by Daniel Simmonds at 07:50