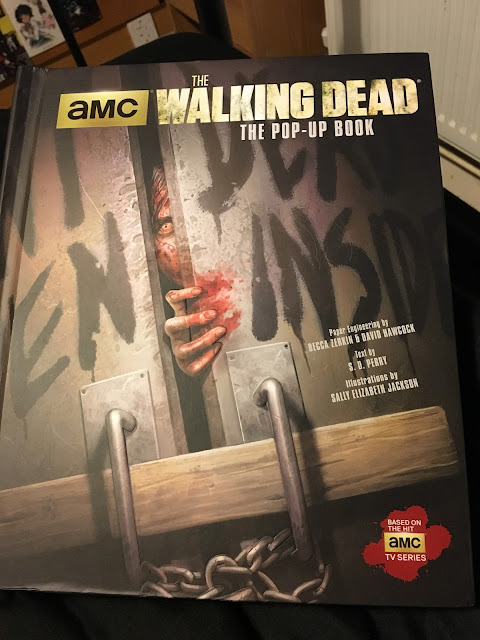 I am hoping to get back to doing regular blog updates some day soon, at the moment my 'office' here at The Rotting Zombie HQ looks like Citizen Z's tech room did post nuclear blast! Today I am reviewing the awkwardly titled The Walking Dead: The Pop-Up Book which is of course based on the TV show rather than the games or the comic. The book features text by S.D Perry who I best know as the author who wrote quite a few Resident Evil novels which on the most part were not bad, especially the ones unrelated to the games.

When I was a youngster I loved pop-up books, there was a posh book shop in town where I would always head to as they had some pretty awesome horror themed ones there, so getting this book as a gift last Christmas I right away thought it was awesome. There are just ten pages to this book but so much detail has been crammed in, each double page has one huge pop-up and usually a load of smaller hidden ones. There are levers to pull, and extra inserts to unfold. I only discovered some of these inserts after a few reads of the book, then when I got it out to look at again so I could review it today I discovered an additional insert hidden within an insert! 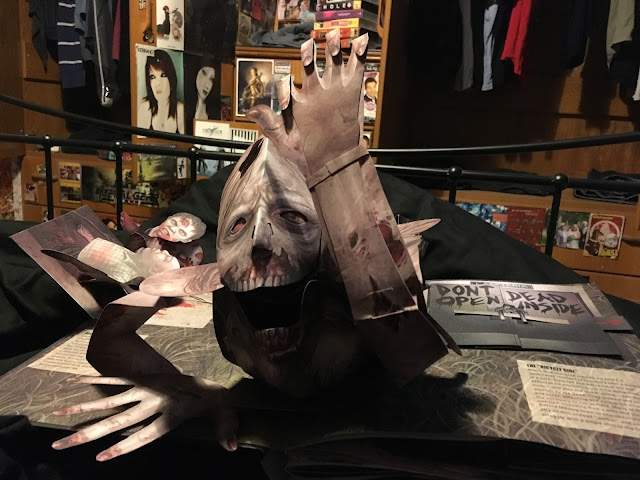 Pretty much the entirety of the book focuses on the zombies themselves, this may be based off the TV show but there is no paper representation of any of the characters, instead it is a lot of bloody violence as well as iconic zombies from the first couple of seasons. The well zombie from season 2, the bicycle girl zombie from the first season, and then lots of movable zombie kills. One lever lets you decapitate a zombie with Michonne's sword, another makes a foot stamp down on a zombie head, all suitably bloody with illustrations by Sally Elizabeth Jackson. The most gory by far occurs around halfway through with a double page pop-up showing the effect a bullet has on a zombies face!

This is for fans of the show rather than people who have never seen it as it briskly flies over seasons 1 to 5, starting with Rick's awakening in the hospital and going all the way up to the reveal of just what Terminus really is. The plot as described takes huge leaps and very brief summaries. The thing I found to be most interesting was what was said about the zombies. For me it has always seemed so odd how quickly the undead can be killed, but here it talks about how the zombies have really brittle bones as a perfectly suitable explanation for the ease of which they are destroyed. 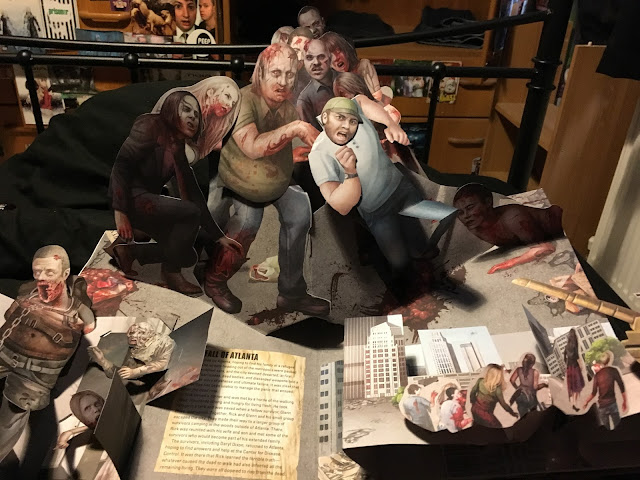 I luckily received this book as a gift from a good friend but in terms of cost I think it is quite expensive so I wouldn't recommend it to any but the biggest or most wealthy The Walking Dead fans, but if that is you then you will love this. The pop-up's are amazingly done, pages spring to life with huge and complicated paper engineering, and it is a great conversation piece, I have met no-one who hasn't been impressed by the design of it, very unique.

Posted by Daniel Simmonds at 06:20