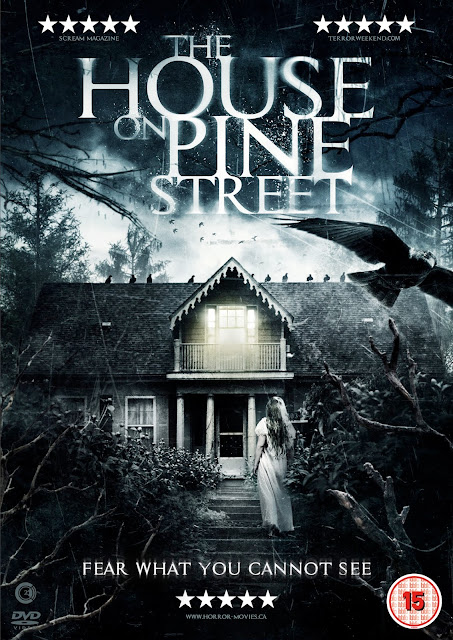 The House on Pine Street is a haunted house film directed by the Keeling brothers who also co-wrote this with Natalie Jones. I at first expected a typical ghost film and thought I knew what would happen but this actually tries to do something a little different.

Heavily pregnant Jennifer (Emily Goss) has reluctantly moved back to her Kansas hometown from Chicago on the insistence of her husband Luke (Taylor Bottles) and her mum Meredith (Cathy Barnett). She moves into an old house and almost straight away she starts to experience strange phenomenon. Objects move on their own, strange footsteps are heard and shadowy figures glimpsed, but Jennifer is the only one who witnesses these happenings. Is the house really haunted or is it all in her troubled mind? 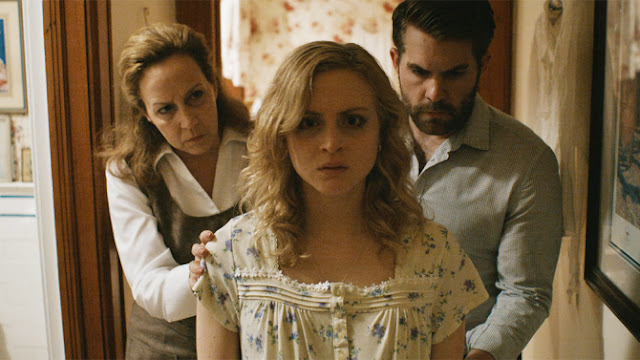 This all starts off quite predictably with our heroine being the only one noticing anything odd. This plot device I always find so stupid, just a way to properly pace out your film yet I have to admit it is not handled that badly here. First there is an undisclosed incident that led to her coming back to her hometown, it is heavily hinted at up until the reveal that she has had mental health problems in the past. For the most part these hauntings are irritating more than anything, doors opening and objects moving around are not really that scary. By the end of the film there has been an escalation and some actually scary moments that worked more as they were few and far between. From Jennifer being thrown around, to huge items being chucked and some really freaky noises at times it worked. However this slow drawn out process was both a blessing and a curse for me.

At nearly two hours long The House on Pine Street can be quite a slow burn, so much so that when I realised twenty minutes were left my heart sank a bit. Jennifer spends pretty much of the film trying to convince people that something really is going on, that she isn't crazy. I lost count of the times Luke wouldn't believe her, so much so I came to really dislike his character. Some parts just seemed drawn out for no reason. There is a whole little bit when Jennifer's best friend and son come to stay at her house, this whole segment really added nothing and felt kind of pointless yet took up a good ten to fifteen minutes of film. It is a shame the whole middle part is so bloated as when the end does come the film really begins to shine. There is a legitimately interesting and novel explanation given to explain what has happened in a stand out scene featuring Jim Korinke as Walter. His character was so entertaining, it was a shame he didn't feature more. I also loved the resolution for the split between Luke and Jennifer's beliefs of what was going on, it was both grand and understated at the same time. The final shots of the house were very chilling despite not showing anything at all. 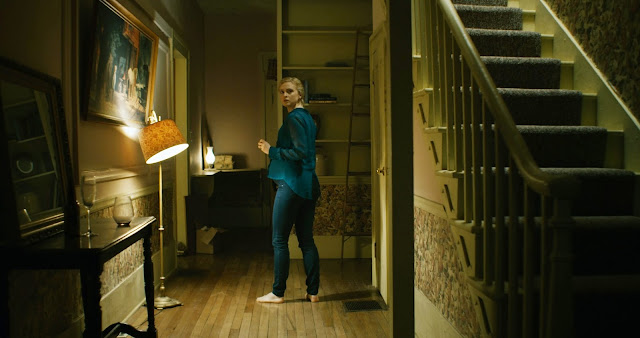 The acting was all agreeable, Goss is great in her role even if it at times boils down to just a scared woman, Barnett as the mum also was fine. My favourite moments for Luke were scenes where he was used to create a scare (several points Jennifer would see him in a room only for the real Luke to then noisily enter the house from downstairs). A lot of the supporting roles were nice in what impact their minor parts had. The next door neighbour with her mute kids though; I appreciate them being used as a contrast to show just what could be going on but they felt completely surplus and out of place. There was an early part where people kept glaring at Jennifer where-ever she went, this was never really explained and just went away midway through. As a whole the goings on at the house are an analogy for Jennifer's internal thoughts and feelings. The pregnancy was unwanted, she doesn't want to be back in her hometown, she has resentment for her husband and mother, all this could be said to be reflected in the ghostly goings on. It was cool to see that it is implicitly stated that no-one living in the house before had experienced any sort of horror before.

While eventually some pretty neat moments arrive I found the whole bloated middle part quite tough to get through, my attention came close to waning on occasion. There are far more scary haunted house movies out there but if your looking for something with deeper thought put into it then The House on Pine Street might be for you.