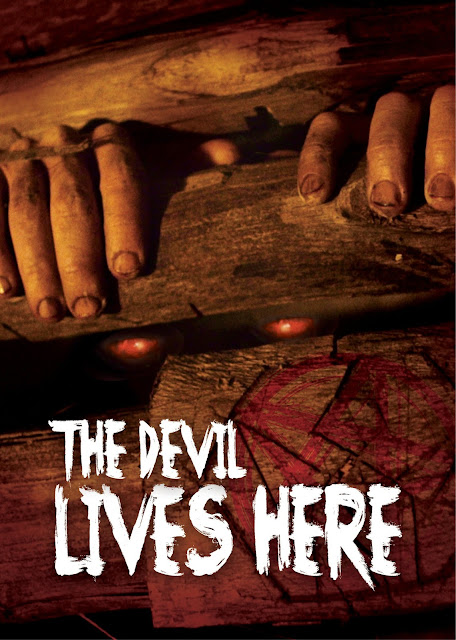 The Devil Lives Here (also known as O Diabo Mora Aqui and The Fostering) is a Brazilian horror film that despite the title is not about demonic forces, but is a film dealing with themes of the occult. With all the horror films I have been watching recently it was actually refreshing to see one that made no attempt to add in comedic elements, this is straight horror all the way through.

Ale, her boyfriend Luciano, and his cousin Magu have travelled to the remote home of their friend Apolo (Pedro Carvalho) for a weekend of partying, or so they think. However the house Apolo lives in is one that had a troubled history. It used to be the dwelling place of a cruel slave owner, his methods eventually got to be so much that his slaves rose up and murdered him, not only that but they also placed a curse on his spirit so he can never find rest. The anniversary of his death is usually marked by a rite performed by the ancestors of the slaves, a night that by agreement the property is left empty, however this year Apolo plans to interfere which turns out not to be the best idea... 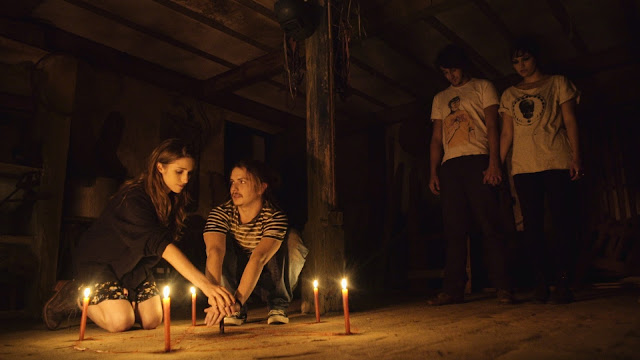 For the first half of the film events play out both in present day and in the properties slave days which was perfect in setting up the antagonist of the piece; the Honey Baron (a captivating performance by Ivo Muller). In these past sections it is all drama in nature with the segments having the Baron talking to one of his slaves. He views the slaves as no better than worker ants, and the way he talks to them is very chilling. Eventually the present day section starts to mention this infamous figure, rather than show what happened to him via more flashbacks we instead get a ghost story which is very effective. I loved how these two different times were handled, especially with the contrast of light and darkness, the past outside, steeped in bright sunshine, the present at night time inside.

Muller is the stand out actor here, though when he does appear in present day he did feel underused a bit. The young adults are all fine enough but there isn't really much to their characters. Magu is played as a flirtatious tease, Ale the troubled one (it is suggested she is schizophrenic), the cousin Luciano is just a nice guy, while Apolo is kind of the joker of the group. There characters mix together well in part but there was never really much shown to give me an impression of what they are like as people. I had expected supernatural elements to The Devil Lives Here and indeed there are, but there were also small parts of the home invasion genre. 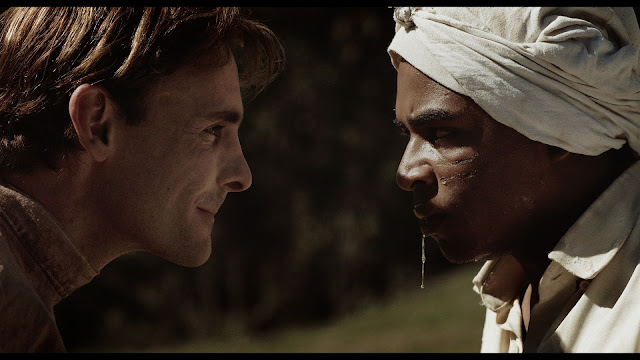 The biggest problem for me was how confusing the plot became, something which was nothing to do with the fact the film was in Portuguese with English subtitles as these were always clear and well translated. There seemed to be two different forces at work going against each other, on the one hand you have the spirit of the Honey Baron influencing people's minds, but you also have opposition in Bento; a hooded zombie who it appears rises from his grave once a year to perform a binding ritual. Both these characters seem to be able to possess people to a degree, or at least cloud their judgement. My issue was I frequently couldn't really tell who was influencing who. At various points people go against one another when I had thought they were on the same side, it all got quite confusing and I was never really sure what exactly was happening. This marred my enjoyment it has to be said which is a shame as the actual look of the movie is pretty decent.

Visually this looks great, I loved the directing, and the use of editing such as Ale's art house style premonitions of the horror to come. Special effects were also cool, it made me wince on occasion such as when someone is forced to shoot themselves in the knee, and at one point someone starts to transform into a monster, that was very fun looking. It may well be due to me watching this film in three different chunks (not intentionally, it just turned out that way) but it didn't seem to flow very well from part to part. The middle and the end especially seem to just bleed in to each other. Using slavery and imprisonment as the theme for the film was interesting, the past segments were definitely my favourite, it was fresh feeling the way this was handled. The pacing was a bit off for me, it felt like characters were getting scared about things that hadn't even happened yet, while some beats were missed, Ale is the first one to start hearing voices, with her mental health problems more could have been made of this but it wasn't. I also felt like characters would just vanish every now and again, appearing as they were needed. 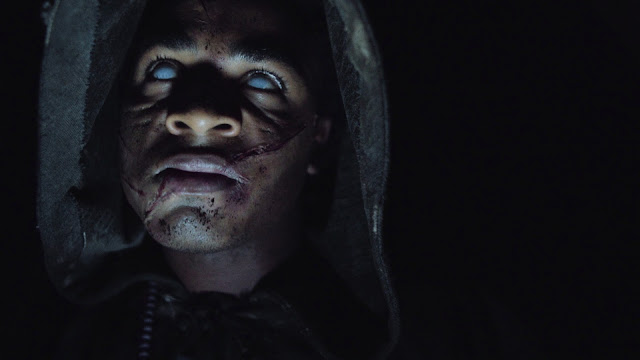 If you are after horror you will find it with The Devil Lives Here, and you will find a great antagonist thanks to Muller, and great special effects. I found that the later half was a bit too confusing for me to properly follow which did affect my enjoyment but the directing throughout is good stuff. The Devil Lives Here is due for release on DVD and VOD on 13th December thanks to Artsploitation Films, check out the trailer below to see if this appeals to you.

Posted by Daniel Simmonds at 04:29