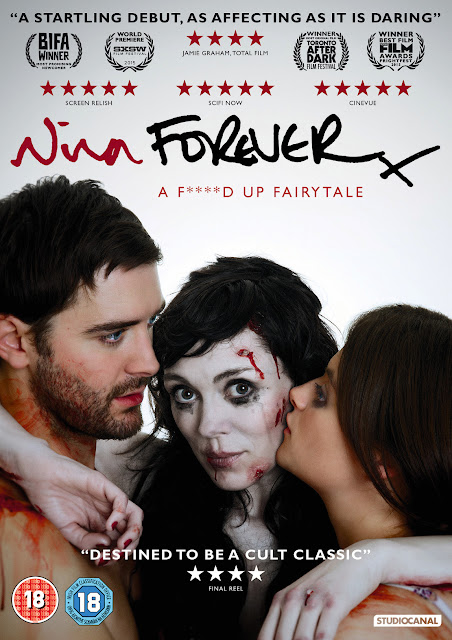 I decided to give the horror movie streaming site Shudder a try, mainly due to the fact the Fright Meter Awards nominations are due in next Friday and I can't afford to buy films to watch. So I gave Nina Forever a watch; a British film that bizarrely is only available to watch on the American version of the site.

Holly (Abigail Hardingham) is drawn to troubled Rob (Cian Barry) due to him being in mourning for his girlfriend Nina (Fiona O'Shaughnessy) having died in a car accident. The two start seeing each other and all is going great until the first time they have intercourse. Somehow this causes Nina to physically manifest (bloody and covered in her crash wounds) and she is determined that her and Rob are still together. Understandably this freaks Holly out yet she weirdly decides she can deal with this happening whenever her and her new boyfriend get intimate. 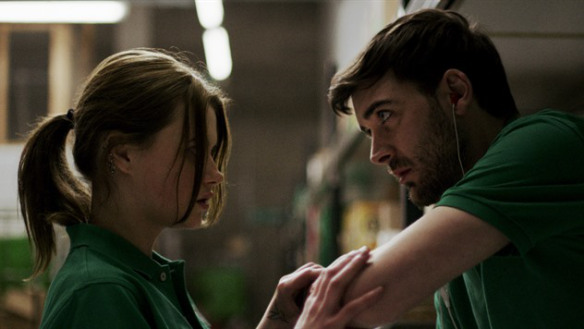 I'm never that keen on sex in movies and here it seems to be that almost half of Nina Forever is sex scenes. There is plenty of nudity on show though the aim is never to be erotic, more that the central concept of the film only occurs during this act. There is an element of comedy throughout, in the style of Ghostworld, that of strange situations that are treated as normal. There is also a lot of drama, this makes up the other half of the film. Getting over a loved one is a key part of the movie, the manifestation of Nina being obvious symbolism for Rob's memories of his deceased love.

Nina comes back as a physical being, zombie like in that she is obviously dead, yet talking is mostly what comes of this, she never really does anything except sarcastically quip to the couple. There are some nice effects when she does appear, climbing up out of the mattress, blood everywhere. She looks suitably dead but I didn't find her actual character to be likeable, something which extends to the other main characters. Nina is never really explored that well, there is no real explanation for why she appears, or how she vanishes again. Rob is a bit of a wet blanket who frequently shuts down when he is put in an uncomfortable position, such as at a meal with Nina's parents, or during the frequent stand-offs between Holly and Nina. Holly at least has some layers to her, Hardingham has some great acting managing to be the troubled one of the three with some real demons surrounding her. 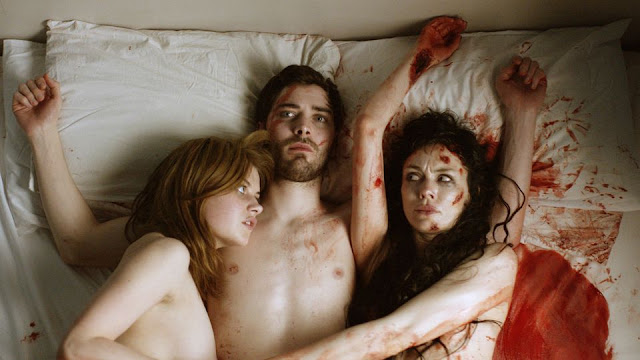 My problem with Nina Forever is that after the initial appearance the film doesn't really go anywhere different. This occurs at quite a few points but each time is pretty much the same, the crutch of sex being needed (for the most part anyway) means there is a sense of repetition with no issues being resolved until far too late into the run time. The horror is minimal with this being far more of a romantic comedy, complete with montages and twee moments (even if the montages do include one of the couple dumping bloody bed sheets). It was all bearable until about halfway through when it really began to drag a bit. The plot does go somewhere and it deals with real issues behind it's bloody facade but that wasn't really what I was looking for here. I did appreciate that Nina herself was very symbolic but wasn't what I was hoping for. On the plus side there is some great music here, in particular I was impressed to hear some Scroobius Pip playing in a key scene.

If your into horror as well as explorations of relationships that don't necessarily end happily then I'm sure you will appreciate Nina Forever far more, this is certainly a well put together film with some nifty editing, however for me there was too much sex, too much couple based drama, and a little dose of boredom.