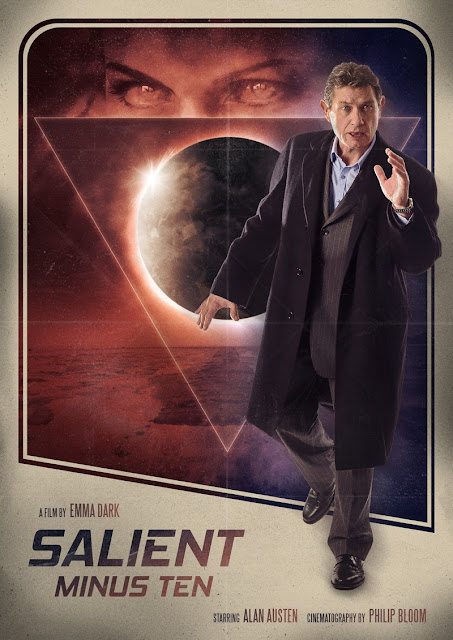 Some would say doing a second day of news on my blog was a cheap way to conveniently pad out the remaining days of 2016, there may be some truth in that. However! I did legitimately forget to scroll upwards in my email inbox yesterday and so I did truthfully forget to mention a few of the news I had been emailed about. So think what you will but know this; tomorrow shall be a original blog post chronicling some of my top horror things of the year.

There has been an updated teaser poster for award winning filmmaker Emma Dark's (Seize the Night) new Sci-fi/horror Salient Minus Ten. The lead actor in this short has been changed from Dean Sills to Alan Austen (Star Wars: Episode V - The Empire Strikes Back. Phillip Bloom has joined the project as director of photography at the time of the recasting. The film has an interesting synopsis; 'Adam Harper is an average man. And on an average day he suddenly finds himself catapulted into the strangest, reality changing game...A game of time and chance, where the stakes are a matter of life and death'. This short is currently in post production with a trailer due to be released early 2017.

Now Wash Club is a short film being made that really has almost nothing to do with horror whatsoever, however I loved the crowd funding video released to promote it and so with an actual trailer released I felt I may as well put that on my site. Wash Club is about a journalist who accidentally becomes the leader of a shady club where-by it's members ride around in washing machines at dry cleaners! It's based on a true story by poet Ross Sutherland, director Simon Dymond heard it and felt he needed to create a film based on this hyper surreal tale. Check out the first proper trailer below as well as the awesome crowdfunder video.