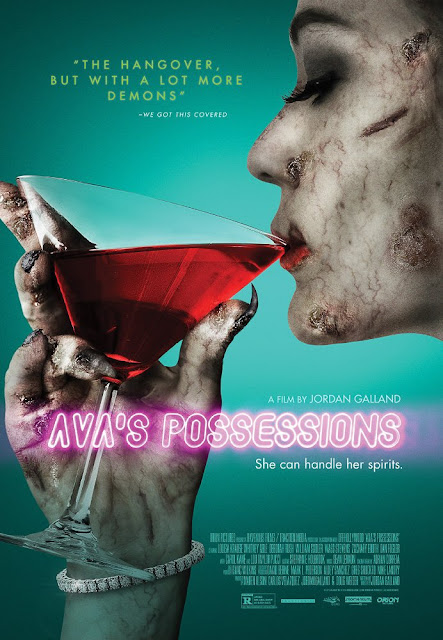 Out of all the many, many films about demonic possession there has never really been one that dealt with the aftermath in any detail before. Ava's Possessions takes a stab at that idea in a comedy horror mystery format. It was written and directed by Jordan Galland (Rosencrantz and Guildenstern Are Undead).

The film starts with Ava (Lousia Krause) only recently having been exorcised of the demon that possessed her for twenty eight days. She is made to go to a help group for victims of possession and part of her recovery is to find out just what happened whilst she was out of control. This leads to the uncovering of a dark secret that even her close friends and family refused to tell her... 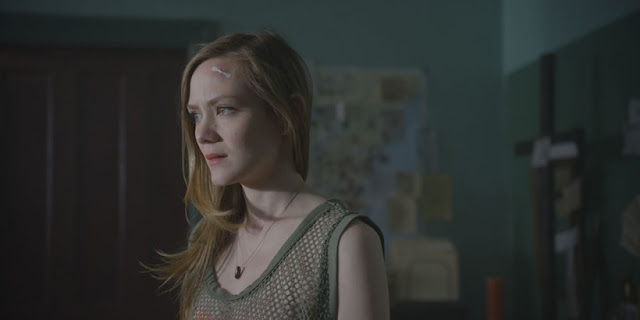 It is a novel idea and one that I'm surprised hasn't been done before in films (to the best of my knowledge). This is usually the point where the film would end but having it as the stepping stone makes for some entertainment. The awkwardness of interactions with her injured family members (injuries that she of course caused), her friends not talking to her due to her behaviour, even people she sees out in the street throwing abuse at her and refusing to see it wasn't her fault. It all leads to mild humour, never laugh out loud but funny in it's own way, such as one of the people at the help group constantly mentioning the dog he ate.

The editing and set design is something that really stood out. There are lots of bright colours that feel at odds with the core story but add a unique attractive look. Ava's flat in particular had such an identity to it thanks to the smart design. Flashbacks come often as disjointed dream like sharply edited segments, while the music throughout is excellent combining wonderfully with the off kilter tale going on. Krause is great as Ava, the rest of the actors do fine enough jobs, there wasn't really anyone who stood out. The help group leader Tony had a good casting choice in Wass Stevens, while Dan Fogler is perfect as Ava's lawyer, elsewhere it was good to see the dependable Carol Kane in a bit part. Star of Spring; Lou Taylor Pucci also plays a part here, he is not to blame but his character was pretty much a one note red herring who was removed from the plot as soon as he had served his purpose, his character felt kind of pointless.

The tone of Ava's Possessions for the most part is that of a mystery, Ava trying to piece together the events that led to her possession as well as what happened in her missing days. This worked in keeping the viewer invested in the events but I have to say the eventual explanation was quite underwhelming, and there were a little too many twists in the last five minutes. I appreciated the use of editing for these segments (playing a montage of clips from earlier in the film as evidence for the twist) but the bigger one of the two was super obvious anyway so to have it hammered home as a big reveal felt a little over the top. The horror aspect only plays into the film on the side-lines, we do get to see a few possessed people and they have nice enough make up effects. Also I liked how Ava kind of has PTSD in the form of glimpsing demonic faces and hearing whispered voices out of nowhere, but aside from these there is no attempt to create scares.

Ava's Possessions is a well made film with some style to it but when the plot is lacking so much I found myself a bit disappointed overall. This throws up some interesting ideas with a unique spin on a well worn genre and for that it is worth a watch, I just don't think it would ever be anyone's favourite film.