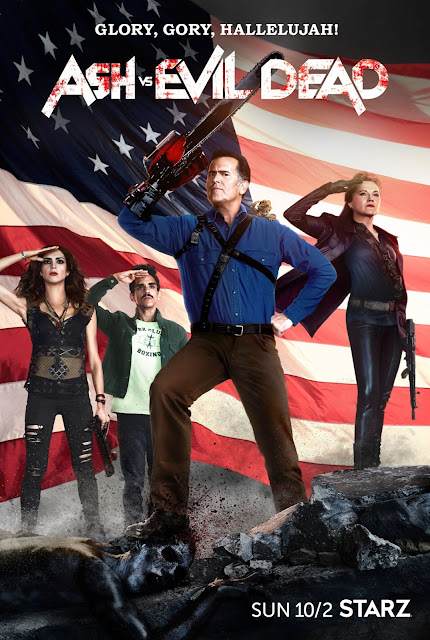 The first season of Ash vs Evil Dead turned out to be so much better than I had ever hoped. It was full of both ultra gory violence as well as being extremely funny. This was both down to a great script and of course Bruce Campbell's Ash. My only complaints were about the short length of the ten episodes, and the resolution to the season and so I hoped for the second season these concerns would be addressed. Spoilers for season one will follow.

This picks up roughly a year after the events of the first season with Ash, Pablo (Ray Santiago), and Kelly (Dana DeLorenzo) partying hard in Jacksonville as per the agreement with the immortal Ruby (Lucy Lawless) who in exchange got to be in charge of the Necronomicon. However the monstrous children she had created have betrayed her and are trying to steal the book to summon from Hell Baal (Joel Tobeck); a powerful and evil demon. In desperation Ruby contacts Ash and together they form an uneasy alliance to defeat the children and protect the book... 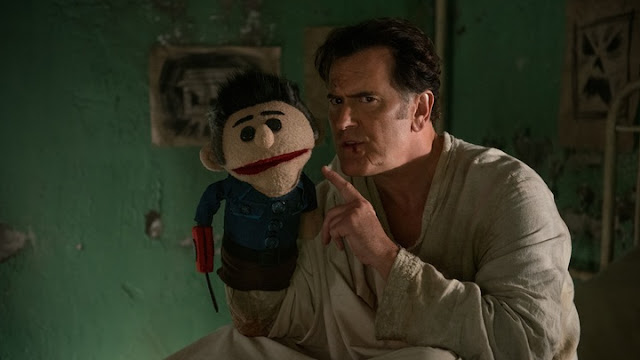 Anyone hoping for an evolution of the format of the show may well be disappointed as season two really is more of the same not trying to do anything too radically different, for me that was fine I might add. Each of the ten episodes for the most part follow the line of action and downtime, but now each episode is five minutes longer in length. Thirty minutes is still too short in my opinion but it is surprising how much difference those extra minutes actually make. Previously there were some episodes that felt cut rudely short but now here they have more room to breathe and cliff-hangers feel purposeful as opposed to time simply running out.

This season the theme seems to be Ash revisiting his past. The majority of the show takes place in Ash's hometown which creates a lot of interesting back story. We get to see Ash's long estranged father Brock (Lee Majors), his best friend from his teen years Chet (Ted Raimi), as well as a host of other characters. It was a nice touch to find out just what happened after the events of the films, with Ash effectively having been banished from the town and earning the moniker 'Ashy Slashy' for having killed his friends back at the cabin. Again there are clips from the films used as exposition, we even get to see Ellen Sandweiss reprise her role as Cheryl (Ash's sister) which was very cool to see. Then finally in episode nine 'Home Again' Army of Darkness is finally referenced (due to licencing issues the events of the third film were not able to be mentioned at all in season one). Having that story finally acknowledged as canon was the icing on the cake for me as it felt pretty weird no one ever mentioning that. Of course on the subject of paying respects to the film the infamous cabin from The Evil Dead and Evil Dead II is once again revisited, though here in quite a clever way. 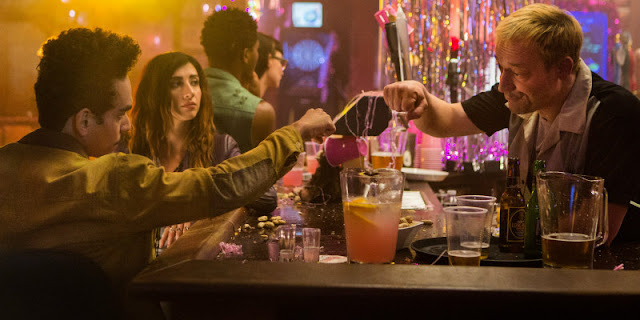 Ash vs Evil Dead is again super violent and gory with characters frequently getting covered head to toe in blood. It is more gross than ever with several moments that had me glued to the screen with a look of utter amazed disgust on my face. To my mind come several examples; a deadite spraying rancid breast milk in Ash's mouth, Kelly falling face first into a used bedpan, and the standout moment of Ash getting stuck headfirst in a deadite corpses bottom, all hilariously funny moments. There is plenty of chainsaw action (even a chainsaw vs chainsaw battle), deadites he faces usually are finished off with a very bloody finisher, while of course his trusty boomstick is in full use as always. I felt this time around there were less possessed people and more demonic creatures. The trusty Delta car becomes an antagonist for a while leading to some really gruesome looking moments, while at one point a hand puppet of Ash appears as a villain. These all look great thanks to much better looking special effects for everything, the awful CGI doll of season one is all but forgotten now. The directing is as always fantastic with many iconic shots of the original trilogy repeated here.

Campbell is again the star of the show in every sense, Ash has the best lines and is played with such fun, his goofy over confident idiot slapstick routine never gets boring. Santiago's Pablo has become a much more loved character for me now, despite having a darker storyline (lingering issues after he got possessed by the Necronomicon at the end of season one) I loved his interactions with Ash and the growing bromance they share. Kelly on the other hand seemed to get more annoying as the season went on, this may be due to her teaming up with Ruby a lot of the time, with two straight characters together their scenes lost the sparkle that the comedic Pablo and Ash had. I wasn't sure about Baal having a human look to him but Tobeck does a fantastic job and I came to find him a good antagonist, meanwhile Majors as Ash's dad was good but didn't get enough time to shine, while Ted Raimi also put in a good performance, neither came close to usurping Santiago or Campbell though. 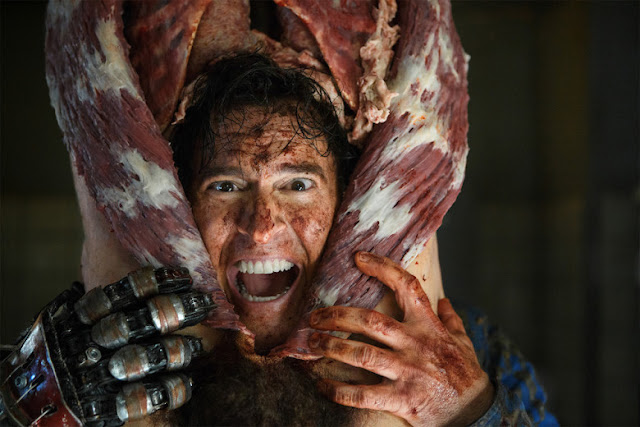 The plot is more cohesive overall, having the show take place mostly in the same location helped the episodes feel more threaded together. Thankfully the finale was not so jarring as before though it was perhaps a bit too much neat and tidy, though with little cliff-hangers and a comment Ash makes I can easily see how season three (confirmed!) won't have much trouble in plunging the gang back into crazy adventures. If you loved the first season then you are going to love this just as much. There is a danger of the show becoming stagnant if the format isn't mixed up a bit but for the moment it works just fine. I just wish they would release it on Blu-ray in the UK as I do not want to get it on DVD (which is currently the only option for me here).

Posted by Daniel Simmonds at 12:17