UK Festival of Zombie Culture 2016 - A Day of the Undead 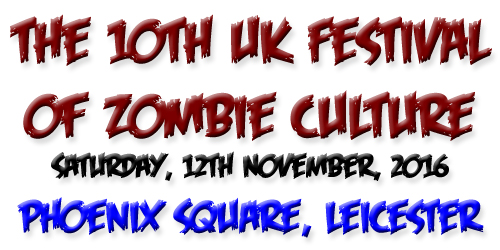 So last weekend was the annual UK Festival of Zombie Culture that as always takes place at the Phoenix Arts Centre in Leicester, I have been putting up reviews of the five feature films throughout the week so now comes the time when I talk about the day itself.

Things started off badly on the Friday when the motorway I needed to get on was closed. Thankfully my quick thinking friend directed me via another route and aside from getting slightly lost in the insanity that is the road system of Leicester city centre we eventually got to the trusty car park we always use. The car park in question had been taken over by a gym however, thankfully there was another superior car park pretty much next door to that one even if it did look like the most sinister place in the world. With bigger spaces though there would be no repeat of last year when I managed to reverse my car into a steel post when trying to leave! 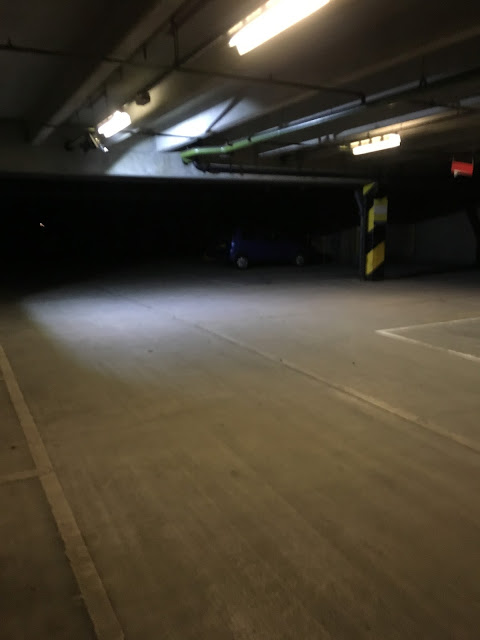 So onto the day itself, we arrived pretty much on time and got given a goodie bag. Previous years it has been entirely full of tat but I was surprised to see a cool Nazi Zombies graphic novel inside; the day was getting off to a good start. As a celebration of the festival reaching its tenth year (the fifth time I have gone, the sixth one I have actually brought a ticket for) rather than six feature films there were to be five with the first slot being made up of a collection of short films, all of which had been shown before. The shorts were arranged into two sections; comedy shorts and horror ones. I may get the order of these a little confused and I can't remember their names at all but I think I recalled them all...

First up was the classic Lego zombies film, I had seen this one before but it is a lot of fun in it's silliness. Then after an introduction by the legend Zombie Ed (who is responsible for the festival and so is automatically great) the rest of the shorts were played. One was filmed inside an IKEA store, apparently without the permission of the company. It was quite stupid in an entertaining way and ends on a musical number. There was a short about kids battling the undead, they were a bit annoying but I liked the ending. There was a puppet Western set in a saloon, for whatever reason I have a genuine uneasiness about puppets and so I felt quite uncomfortable getting through this one, was glad when it ended! There was a film that was a mocumentary about a zombie film getting made that was ok, then it ended on a ridiculous film about a group of zombie slayers who travel around on unicycles. This last one was stand out due to the utter ridiculousness of the scenario.

After a brief break the serious zombie shorts came on. There was one set in an industrial estate, it was noted as being the very first short Zombie Ed ever put on at one of his events. There was one set during World War II, it was ok but it ended quite weirdly. A surreal silent French one was next that featured a clown getting reanimated and then going on to breaking into someones house and cooking and eating his victim. The last film took place in America during somewhat more racist times. All in all the shorts were not bad, I have seen better but the time certainly passed quickly while watching them.

The three minute zombie slaying challenge was not at the event this year, I don't know why but we missed it, my friend more than me seeing as she won a prize from playing it last year...for being the most comically bad at it. I brought some raffle tickets then we went in for the first feature proper; Night of Something Strange. Zombie Ed warned everyone before hand that it was a film that would stick in the mind for a long time to come...he wasn't wrong! I had not thought I would enjoy it as the trailer made it seem like it was full of sex and bodily function jokes, neither of which I like that much. Thankfully it was so gross and over the top that I kinda admit to falling in love with it, it had some great special effects and some genuinely laugh out loud moments.

After a brief break in which I had planned to meet the authors in attendance (they were being interviewed so I couldn't) it was time for the second film; the UK based Plan Z. This was by far the most bleak and realistic film this year and it stood out as a result. I liked the way it played out and I loved that it was a passion project of the directer, writer and indeed main actor Stuart Brennan (who I may or may not have glimpsed in Five Guys the next day, probably not) and that it was actually his real life zombie survival plan made into a feature.

It was now the break time and I made a bee-line straight for the authors who as always were all such friendly people and more than happy to sign their books for you. First up was Duncan P. Bradshaw. I had brought his comedy horror books Class Three and Class Four: Those Who Survive last year but I hadn't heard of him and so wasn't sure what I would think. Thankfully they turned out to be fantastic books and so I was excited to pick up his new book; Chump. It was good to see him again and must have spoken for about ten minutes about various zombie related stuff (such as The Walking Dead and bad zombie films) as well as given some hints as to what is going to happen in his future books. I admit I did kind of geek out a little bit, if it wasn't for my friend needing food I would probably still be there now talking to the poor guy! Then I spoke to David Moody; the author of the sublime Autumn series and the interesting Hater series. I'm always impressed he remembers my name, another friendly person. He mentioned about a possible Hater TV show that could be in the works as well as what his new trilogy in the Hater series is going to be about. Finally I spoke to Adam Millard (again super friendly) and picked up The Ultimate Zombie Quiz Book which was newly out, as well as brought Larry II: The Squeequel which surprisingly enough is the sequel to Larry that I got last year, he mentioned a third book in the series is being worked on. 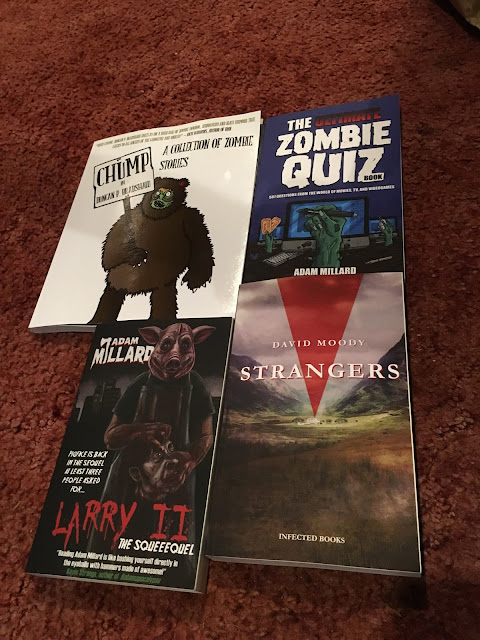 After a tasty Chinese take away box thing it was back to Phoenix for third full length film; Train to Busan. My friend was very excited for this and thankfully it was amazing, hands down the best film of the event. The look of the zombies and how they moved were so freaky. I have since pre ordered this gem on Blu-Ray. After a fruitless visit to a new nearby Lidl it was time for film four; Attack of the Lederhosen Zombies. As the title suggests this was a comedy horror, it did have some fun moments and some decent special effects but for me it felt a bit too formulaic. By this point we were feeling quite tired so that may have factored into this feeling. The raffle prizes were handed out before this film, as usual I didn't win anything, but as usual gifts were still given out for pretty much everyone with tickets (I got two books and a graphic novel with my tickets).

The final film was Peelers and boy were my eyes tired! We were determined to last though, and last we did. A zombie comedy of sorts set in a small town strip club. The zombie make-up was effective and it was enjoyable enough but I wouldn't class it a classic. With that over we tiredly walked back to the hotel we were staying at; another year survived. I as always really enjoyed the event, though I don't talk to many people it is nice seeing the same familiar faces each time. Zombie Ed is awesome for putting on a consistently good festival each and every year, long may it continue!

So for my thoughts on previous years click on the links below...