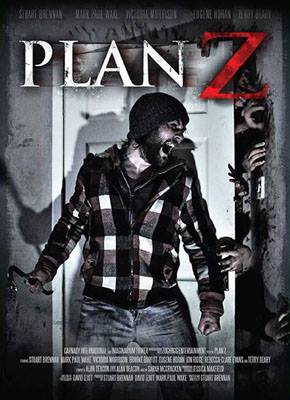 Plan Z is a passion project from Stuart Brennan who directed, wrote and starred in this low-fi UK zombie flick. He has stated that a lot of horror fans have a plan in their head for what they would do in the event of a zombie apocalypse, Plan Z is his idea given flesh. This had it's European premiere at the UK Festival of Zombie Culture and was the most realistic in feel of all the films shown there.

Brennan stars as Craig; a photographer who in his downtime while travelling the globe had come up with a plan on how to survive if zombie apocalypse ever occurred. He hadn't expected it to ever happen, yet when a swift world wide viral outbreak actually does lead to the dead returning to life Craig decides to head home and enact his idea for real. He is to wait out the chaos in the safety of his own home, then when supplies head low he intends to travel to a remote location until the worst is over. Even the best laid plans have problems though... 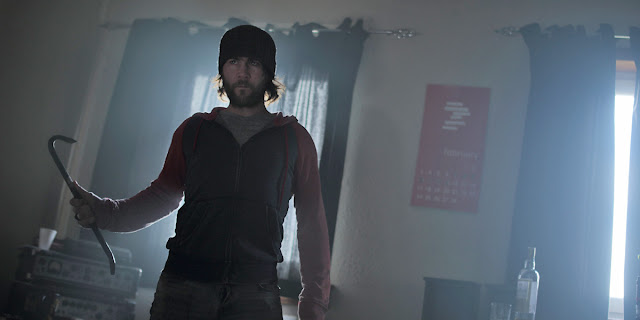 Plan Z starts off in one of my favourite ways, that of an event in the future being shown before heading back in time to show the events leading up to it. We see a dishevelled Craig desperately trying to hold a door shut as hordes of zombies reach their hands through an opening in it, that's all we get, so immediately I wanted to know how this came to be. Time is something that is played with throughout the movie, usually in the form of characters thinking back to previous experiences that shed light on their present day actions. My first impressions of this film were not favourable, it all starts with a monologue from our main lead whose gruff voice I found very hard to understand, thankfully this was about the only time I struggled to understand what was being said. Plan Z is very much a character piece, focusing mostly on just Craig himself and his view of the world as well as his interactions with other survivors. As such there are no scenes of mass uprisings and destruction, everything is what he encounters from his first glimpse of a zombie to the enactment of his plan.

The idea behind the film is something that I'm sure many of us have come up with, my plan doesn't involve ever leaving my house for instance (unless a friend needed me, such as happens here) but the one on show here has it's own merits as well. It is interesting just how much of a personal project this is for Brennan, he really put a lot of thought into the film. There is a limited budget but lack of money is made up with this intimate portrayal of one man's journey. Not too long into Plan Z and we get introduced to Bill (Mark Paul Wake) who Craig rescues from the toilets of a nearby restaurant. These characters contrast well, Craig only wants to look out for himself and those he cares about, Bill on the other hand wants to help people, maybe to atone for what he sees as his crime of barricading himself away when all around him were being attacked by the undead. Later on a couple more characters show up, one who has a big impact on the eventual goal of Craig, others who don't really do too much to stand out.

My biggest complaint about Plan Z is the universal poor portrayal of women. Aside from one moment when a female is forced into confrontation all appear just to be damsels in distress. Early on we see a screaming woman trapped in a car who Craig comments in anger about her being too scared to try to save a little boy he had seen getting attacked. Later on we have a woman who is instructed to hide in a cupboard due to her being too scared to be of any use. It is always the 'big strong men' going off to do the hard work while the female characters are instructed to hide. On the flip side Bill does seem to be the character who suffers the most with his PTSD, the film frequently has flashbacks of Bill, terrified hiding away as people scream for help, so it is not all one sided.

Flashbacks are used a lot to give flesh to the cast, most of these are pre-apocalypse and help shed some softer tones on some of the more hard feeling characters, such as a meeting one person had with his sister displaying the bond they shared. Elsewhere we get Bill's last ever phone conversation with his parents, this was perhaps the stand out emotional point of the film, sad and tragic and something that worked really well.

Zombies here are of the traditional slow moving variety, the make-up works in making them separate in look to the living. As I always say, it is pretty hard to make zombies not look like zombies, one of the reasons I adore the genre so much. Plan Z also doesn't shy away from showing child undead which is always a weirdly refreshing thing to see. Aside from a few strong scenes there isn't an over abundance of action so when they come they have more impact. The film ends in a way that made this seem like an origin story to a greater piece, maybe Plan Z.1? though I admit the eventual goal of the characters I didn't really think was pragmatic.  I liked the bleak tone, I loved the time jumps and I thought some of the editing was quite strong (a great Sense8 style travel mash up at the start stuck in my mind). Also special mention has to go to how Craig would psyche himself up each time he had to go encounter zombies, not something I recall seeing in many films of this type before.

I am glad I got to see Plan Z, I had zero expectations but the more personal touch really adds to the drama going on, these are real people with obvious flaws, and I never get enough of UK based horror films. If you ever get the chance I recommend you check this out and see for yourself how clever use of editing can really make a film feel different from the pack.