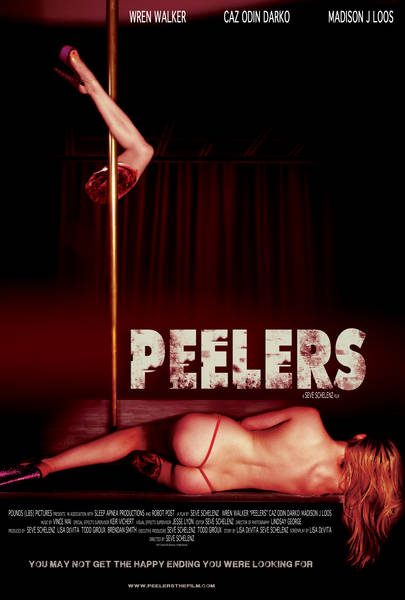 Originally Re-Kill had been billed as the final film at this years UK Festival of Zombie Culture but at the last moment that fell through and Peelers was chosen as the film to replace it. Peelers has been shown at a lot of festivals this year and I have covered it before so was interested to see it. However I suspect that being the last film and with me fighting sleep I was not as receptive to it's charms as I could have been.

Peelers takes place almost entirely in a small town strip club on it's closing night, having been brought out from owner Blue Jean (Wren Walker) by a corrupt government official. The night gets off to a traditional start until the arrival of a group of oil covered miners who are out to celebrate turns the evening into a living nightmare. The oil that they are covered in changes them, turning them into unstoppable undead killing machines and soon Blue Jean, her strippers, bouncer Remy (Caz Odin Darko from Wind Chill) and her son Logan (Madison J.Loos) find themselves fighting to survive... 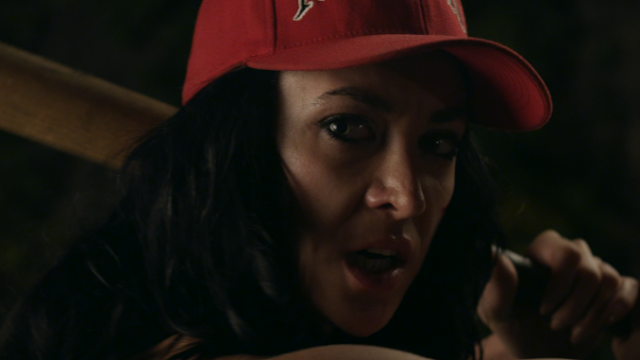 The set up for Peelers takes quite a long time, a lot of the first third of the film just involves the various strippers of the club all doing their dances while quasi-drama takes place in the background. You have a new stripper whose boyfriend disapproves of her job choice, a cocky friend of Logan's who gets in an altercation with Blue Jean, while it turns out Logan himself is wanted by the local police for stealing a cop car. This all plays out with dance numbers by the strippers that feature lots of nudity and gimmicks that I didn't think added much at all to the story. There have been zombie flicks set in strip clubs before (Zombie Strippers and Zombies, Zombies, Zombies spring to mind) so I did kinda expect some of this, just not how much there was to start with. Of course this all changes once the action begins.

Continuing the trend for different from the norm zombies the ones here have been transformed by the oil, as such for the survivors even so much as touching this goo is enough to transform them also into monsters. This is used as a plot device with characters doing their damnedest not to touch it but on occasion this rule is broken for scene purposes (such as people grappling with them). I loved the look of these oil zombies, quite distinct looking, the film is lit in a way that perfectly complements this look. This is a very dark film, in that it is always literally dark and poorly lit, this actually accentuates the look of the antagonists, the black substance gleams in this twilight look making them seem quite sinister. Unlike most zombies head-shots do not do anything, this leads to a lot of moments when the small group of rotters just keep springing back to life like rotted Terminators. The undead exist only to kill and to do this they use a variety of weapons such as butcher knives, daggers and even a chainsaw (that is inexplicably in the club due to a silly sub-plot). What I loved about them is the editing is pure slasher to begin with. Characters are killed by an off camera assailant that uses many angles of the slasher genre, eventually it does devolve into something more fitting of the zombie genre but I did enjoy the initial reveal (especially a part in the toilets that screamed Condemned 2 to me). 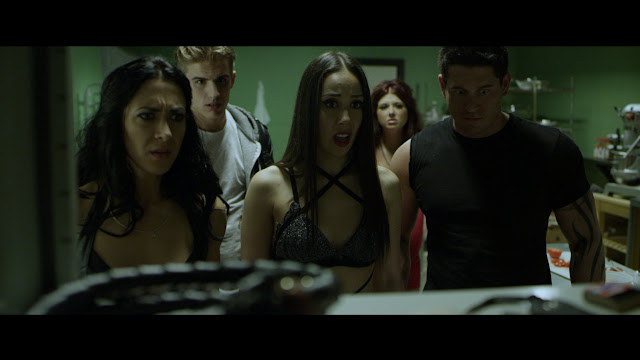 One thing you can't complain of is a lack of strong female characters, Blue Jean in particular is a strong as nails no nonsense taking woman who is the driving force behind the survivors assault, getting several cool scenes to herself. Bouncer Remy plays the part of the strong man but one who is less aggressive than you would expect, I did like the infatuation he seemed to have for Blue Jean. Her son Logan meanwhile is the wise cracking smart-ass who I just found to be irritating, his one liners eye rollingly bad and all but a few lines of his script pretty darn awful. It was a shame that I didn't really like any of the main cast, they all were not people I particularly cared for, maybe due to the confidence they all exhibit in such a perilous situation, all a bit too cocky.

There is lots of action and violence her with a variety of characters getting severed heads or swift gory death, and even death by urination at one part. There is a great surreal early scene in which two patrons and a stripper get brutally killed during a private dance, almost art house in the way this particular scene played out. The very start was also quite attractive, someone getting killed behind a closed door, crimson blood running out from under the bottom, set the tone for the film to come. The make-up effects were pretty good but I found special effects for explosions to be terrible looking. I felt that towards the end there were maybe a few too many false ends, maybe it was because I was tired but I was eager for it all to get wrapped up. When the end does come it is inspired though, it did something I did not expect, something I can't see a lot of films having the balls to do, it stuck in my mind for a long time in it's awesomeness leaving the conclusion up to the viewers interpretation which is always a good thing.

I enjoyed Peelers, it is a well made zombie film with a difference but there were parts I wish had been better, such as the script,  the desire it had to show as many strippers as possible, and the overall sense of familiarity in what happens. This certainly has its moments, and is worth watching for the zombie make-up.