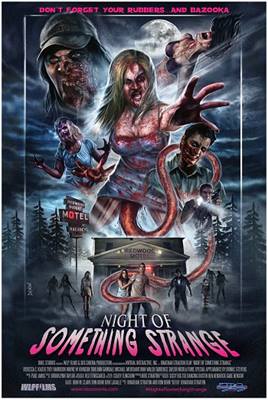 So I have returned from another fantastic UK Festival of Zombie Culture that is held annually in Leicester. The same as previous years I shall attempt to create passable reviews based on brief notes and keywords scribbled down during the 13 hour marathon. This year there were five feature films shown, the first being the ultra gross Night of Something Strange...

A necrophiliac janitor unwittingly contracts a deadly and disturbing STD after sleeping with one of the bodies in the morgue he works at. Returning home it isn't long until the disease has transformed him into one of the walking dead, but rather than the desire to eat brains he has the desire to pass on his infection. Meanwhile a group of high school teens on their way to the beach for spring break end up at a remote motel where they find themselves at the centre of this strange outbreak. 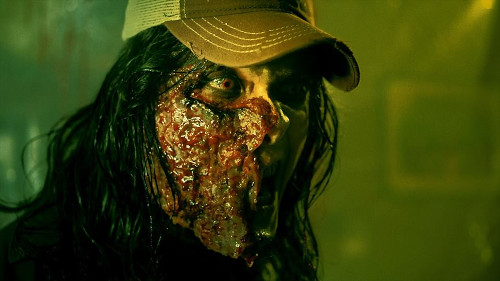 Before the movie started the event's host Zombie Ed jokingly warned about how wrong some parts of it were and he was not incorrect, every time I thought I had seen the worst there would be another scene that would out gross the previous one. When I saw the trailer for Night of Something Strange I felt unsure if I would like it or not. This is a comedy horror in every sense of the word but features both proper horror as well as mightily silly scenes. My problem was that it appeared to be nothing more than a collection of jokes about sex and bodily functions which are two areas I don't find that humorous, yet despite an unsure start I soon found caught up in the ridiculous story line.

The main cast all have very little to them, made up of the usual stereotypes that include an overweight bullied outsider, a joker, a jock and a princess. None of these are well rounded, while the main female lead was so plain in her characterisation that she seemed to fade into the background of every scene she featured in. Main male lead; Dirk (Trey Harrison) seemed such an archetype of the hero model with po faced delivery of his lines and obnoxious one liners that I very early on disliked him. I thought that his script was awful but rather wonderfully it is later revealed that the script writers had purposely given him this familiar way of the hero archetype that gets a great pay-off to the audience later in the film. 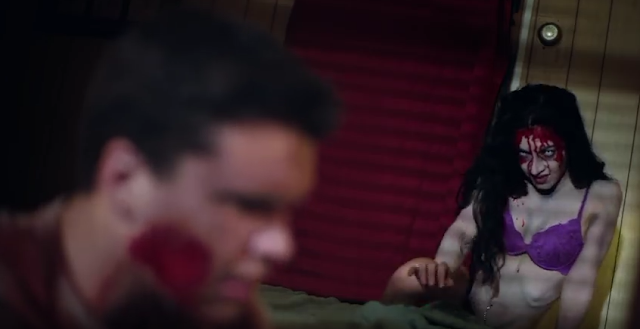 Being young adults pretty much all the male characters are obsessed with sex much to the disdain of the female cast who are constantly having to deflect their unwanted advances. This feeds into the jokes well, especially one part that was a real highlight of the movie. I wont go into too much detail but it all starts with one of the young men in the darkness of their motel room mistaking another male for their sleeping girlfriend. This leads to an escalation that the film keeps going back onto throughout the run time, each time the delivery of the lines was so perfect. While for the living cast this constant horniness is restricted mostly to the males for the undead it is far more balanced.

Zombies raping people to death rather than eating them is something I had not seen before, and on paper it sounds a bit too dark. On screen though the way these scenes take place there is a firm handle on over the top gore and absurdity that make it obvious this was not done to properly offend people, more as a way to gross people out. The very first zombie rape scene for instance has the undead in question rip the genitalia out of someone and eat it; a very gross scene but sets out the style of Night of Something Strange perfectly. This leads to all sorts of gross death scenes such as someone who is killed by vast acidic ejaculation, as well as mutated and apparently sentient genitalia. The undead look the part with some great make-up effects used, and a change up for the books in that head shots don't work on these ghouls due to the location of the initial infection. Though they are limited in number the zombies all have distinct looks to them, the most memorable for me was a perpetually smoking zombies, every scene she appeared to have a freshly lit cigarette hanging out her lips. 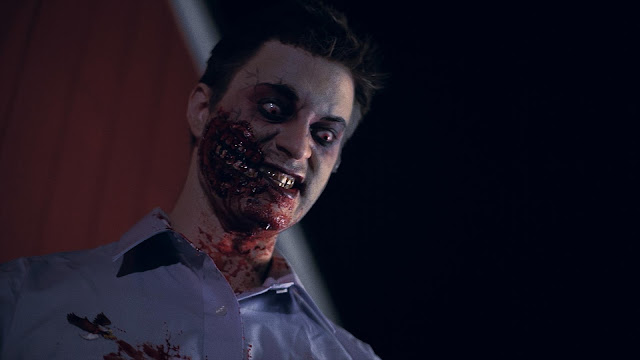 As I said the number of zombies isn't huge, there are just a handful, but this works well with the small main cast, it was fun to see as one by one the group are dwindled down, whether it be them getting killed off in freakishly gross ways, or them joining the growing monsters. A lot of the film takes place at the motel location, it seemed strange how zombies all manage to end up there when seemingly a lot of them are turned in various other locations. The plot itself has been done to death countless times before, just that of people trying to survive the night, but the STD angle adds a little bit more, a morality tale about the dangers of unprotected sex (is telling that one of the only survivors is someone who was shown to be using protection when he had intercourse). There is a sub plot of sorts involving the creepy owner of the motel but this felt a bit disjointed and didn't feel it linked up that well, or was resolved to a satisfying degree. The film all wraps up in a fun twist ending that was genius in its abruptness and which I didn't see coming.

Night of Something Strange is a film that I really didn't feel I would enjoy, while some of the jokes where a bit too sick and gross for me to laugh at too much (mostly involving bodily functions) there were still plenty of times the craziness and inventiveness of the great special effects shone though. A funny and entertaining film all in all that is worth a watch if you can stomach it!