Call of Duty: Infinite Warfare - Zombies in Spaceland (2016) - Thoughts on the new mode 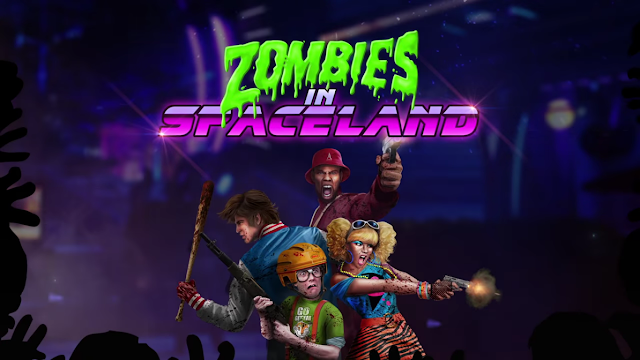 So yesterday the latest Call of Duty game came out; Infinite Warfare. While much of the game takes place in space I was far more interested in the developers take on the classic Zombies mode that is so beloved by me. Initially when it was first announced I thought it was actually going to take place in space, much like the Moon map from Call of Duty: Black Ops, instead it takes place during the 80's at a theme park based around space.

The animated intro (done to look like a 1950's pulp cartoon) sees four actors (Andre, Sally, AJ, and Poindexter) arrive at a disused cinema to audition for a once prolific horror director Willard Wayler. They had heard his audition process was tough but none were prepared for what happens next. Using some sort of demonic ritual Wayler creates a portal that sucks the group into one of his own films set at a Spaceland theme park. Once inside they find themselves dressed up like the characters they were due to play, not only that but find themselves under immediate attack by hordes of zombies. Wyler instructs the group to pass the audition they have to survive...

While this latest version of Zombies is not made by Treyarch I am pleased to see it plays pretty much identically to their one. Puzzle boxes are now wheel of fortunes, you have candies instead of gobblegums, you still board up windows to slow the tide of the undead, and you still kill them in never ending rounds (here named scenes). The setting is fantastic, set during the 80's the zombies are dressed in an appropriate fashion while the theme park blasts out a vast number of classic 80's songs as you fight (The Final Countdown, Two Tribes, Temptation to name a few off the top of my head). I had worried these songs would be over powering but it's actually the other way around, the songs come out of speakers and so fade in and out depending on where you are. I did find myself dangerously hanging around the speakers if a song I particularly liked came on. 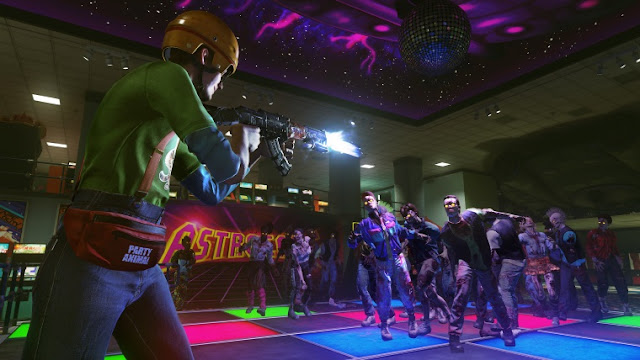 So Spaceland is split into several different areas all going around a rough theme, these areas are connected by basement passages while once the power is turned on in each place a portal can be used to warp back to the starting area. Off to the left is the space exploration section, the right has an alien theme going to it, while straight ahead is an icy location. Each round zombies assault you while special rounds feature exploding zombie clowns (which led my friend to wonder if all these sinister clown appearances in real life were some sort of promotion gone wrong for the game). A hulking giant zombie also appears, he wears an alien mascot costume and fires laser beams from his eyes. He can only be killed once he has removed the head of his costume. I have not tried all the weapons yet but I noticed classic Black Ops weapons as well as the futuristic weapons of the main Infinite Warfare game.

There are some parts that feel fresh and new. A robot can be activated who gives you various challenges to complete, such as killing seven zombies while jumping, or melee killing a set number. Doing these grants you tokens that let you get access to exclusive items such as a black hole bomb and a freeze ray. On occasion the undead drop items, along with cash and ammo they also drop tokens. These tokens come in a variety of colours and can be mixed and matched in a token machine to get an exclusive tool. These special one off items include a gun turret, an exploding boom box (that operate the same as monkey bombs), a laser grid to place on windows as well as countless others that I have not yet seen. Vending machines again give you all the traditional perks as do power ups that sometimes get dropped but there are new ones. One vending machine makes your melee attacks stupidly powerful for instance, while one of the new power ups gives you infinite (warfare) grenades for a set time. There is even a roller-coaster ride you can have a go on where you earn points for shooting targets. The coolest new thing I found earlier today was when the Knightrider theme tune started playing and David Hasselhoff (who is the park's resident D.J) showed up to fight alongside me! When you die in the game you go to a place called the Afterlife Arcade, in this place you have to earn spirit energy from various mini games in order to be able to return, an interesting idea.

I love the colours of this new map, the great music and the distinct eighties look, as well as all that the map seems to be well designed with lots of routes to get you to where you need to be. I had some misgivings over whether Infinity Ward would be able to replicate the classic Zombies feel, I am happy to report they do. I liked Exo Zombies from Advanced Warfare but this is a better mode than that. I am enjoying the single player campaign (for once!), the multiplayer seems functional if a little bland, for me though Zombies is where it is at. Below is a video of my first ever go at the map...