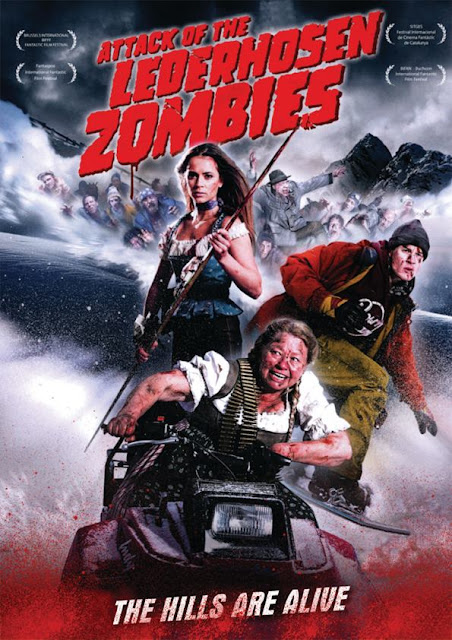 The fourth film at this years UK Festival of Zombie Culture was the horror comedy Attack of the Lederhosen Zombies. Coming right after the astounding Train to Busan and the much funnier Night of Something Strange this movie suffered a bit. Despite any misgivings I might have had there was definitely parts of this Austrian film that really charmed.

Pro snowboarder Steve (Laurie Calvert), his girlfriend Branka (Gabriela Marcinkova) and his friend Josh (Oscar Dyekjaer Giese) are left behind on a mountain after an ill advised prank Steve plays leads to his sponsorship deal getting cancelled. With no way to get to the nearest village until morning they are forced to seek refuge in a bar. Unknown to them the owner of the mountain in a bid to create snow has accidentally made a toxic concoction that infects a prospective investor, who then turns into a zombie. Soon the hills are alive with the sound of screaming and with no option Steve and his fellow survivors must battle the walking dead while looking for a way to leave the cursed peak and escape to safety. 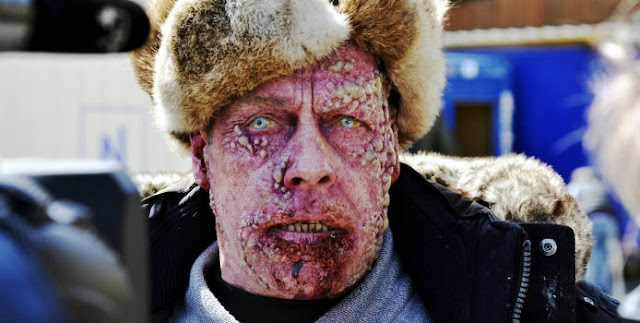 Attack of the Lederhosen Zombies as the title implies is quite a silly film that doesn't take itself seriously at all, much like the main lead Steve. Unfortunately I feel the wrong character was made the lead for Steve from beginning to end was insufferable. His girlfriend Branka is the serious one of the two yet somehow rather than the unfolding horror shaping Steve into a better person it instead somehow makes Branka more silly. The way he acts infuriates at times and makes so little sense. It is discovered at one point for example that music puts the undead into a trance like state, Steve being Steve bizarrely thinks this is a great time to have a ridiculous dance scene with his girlfriend while the zombies all around look on. Josh on the other hand is the nice guy of the group and his storyline becomes very funny (even getting a fun mid credits bonus scene). It was a shame that he wasn't the lead as I just did not care one bit about the other guy.

In many ways this feels quite formulaic in the way it is set out, all the way down to a thrilling last battle, a corrupt and obvious antagonist and plenty of gags, but as I said it can be funny on occasions. Early on for example a drunk guy mistakes the zombies for other party goers which leads to hilarity, while a scene set in some toilets had a great sight gag involving a broken lock on a cubicle door. A lot of the jokes come from the actual battles with the undead, more of that later on in the review but one such example has heroes and ghouls both all slipping over on ice as they attempt to attack each other. Comparisons with Dead Snow were immediately made just for the fact there really are not that many snow based horrors but unlike that one the level of blood on show wasn't that much so you never got much of the beautiful juxtaposition of claret on white. One thing I found strangely satisfying were frequent Monty Python style map transitions that showed the characters movement around the mountain range, helped give a sense of scale while also being useful in it's own right. A part which I felt more could have been done with was the element of the cold itself, on occasion you see partly frozen zombies due to the weather conditions but at no point do the characters themselves react to the temperature. This was a missed opportunity as having to contend both with the walking dead as well as the threat of frostbite could have been cool (literally). 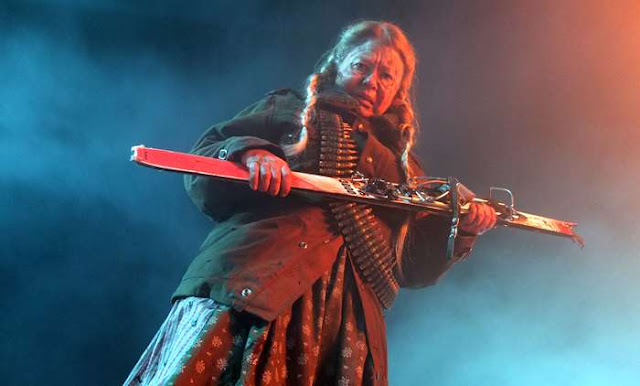 So a lot of the comedic elements come from the zombies and the variety of ways they are battled. Zombies here are identified by the growth of large boils on their faces, all quite gross, the patient zero one even keeps vomiting luminous green bile. They are of the walking variety and really quite dense easily being tricked, yet they are a threat as one great scene demonstrates in which an unlucky bar patron is eviscerated in the classic way via a swarm of corpses. A whole host of unique weapons are used for the fighting, there is a whole long montage where the survivors go to work on them via the use of snowboards, grinding down rails and flipping around severing heads and limbs left, right, and indeed centre. One recurring zombie gets ski sticks thrust through his head meaning not only is he blind but he keeps getting comically stuck on the scenery in his pursuit of flesh. A mobile wood chipper is used at one point leading to some quite violent scenes of the walking dead being sucked into its blades. The most memorable zombie death leads to one being sliced open, his brain, eyes and mouth all fall out his body, the lips squeaking noise as they fall onto the floor. There are also quite a few zombie deer in this movie, all are puppets and look ridiculously great.

Attack of the Lederhosen Zombies is a funny film that is pretty inoffensive, you will find things to laugh at, but for me it felt a little too by the book, even if that book was a wild zany one. With a better main hero this could have been great, as it is I certainly enjoyed it but is not an essential watch.