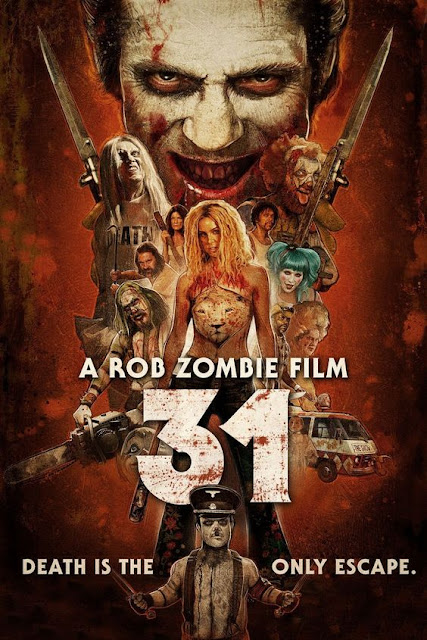 Before I start this review of Rob Zombie's 31 I have a couple of confessions to make. Number one; I am a huge fan of his, I love his music, I love his style, and I love his films (with the exception of the horrendous animated film The Haunted World of El Superbeasto). My second confession is that I have broken one of the core rules of The Rotting Zombie in that I have been drinking whilst watching a film for review. Both of these factors will...well factor into this review, so take my words with a pinch of biased and partially tipsy flavoured salt.

The year is 1976 and a group of travelling carnival employees that include among them Charly (Sherri Moon Zombie from every Rob Zombie film ever), Roscoe Pepper (Jeff Daniel Phillips from The Lords of Salem and Halloween II), Panda Thomas, Levon Wally, and Venus Virgo (Meg Foster from They Live) find their van's route blocked by an obstruction on Halloween night. While trying to clear it they are attacked and captured by a bunch of costumed goons. They are taken to a compound where Father Murder (Malcolm McDowell) informs them they are part of a special event called '31'. All they have to do is survive for twelve hours and they will be free to go, but during this time they will be hunted by all kinds of murderous clowns...

It all starts off fantastically with a black and white segment in which Doom-Head (Richard Brake in his damn element!) near enough monologues to the camera oozing restrained fury as he does so. This is followed by a delightfully grainy and fun 70's inspired retro looking credit sequence that introduces our cast. These elements both cemented for me Zombie's moniker as the Tarantino of horror (a term I did come up with myself mere moments ago). A problem with a lot of his films is that he never really fleshes out his victims much, especially in House of 1000 Corpses. Here more than any other of his films it is full steam ahead to the action with less then ten to fifteen minutes of build up (that feels very similar to 1000) before the poor group are in hell. It is a shame these characters were not developed more as I just could not care less about these people. I wasn't really routing for them, especially as the bad guys had so much personality to them. The core group are all fine but I gotta admit even I am getting tired of Sherri Moon Zombie being cast as a main character in every single one of Rob's films, makes what is going to happen more predictable in terms of knowing she will be the main lead. It was good to see her play more of a victim role but still, some fresh blood would be nice to see.

I don't know if anyone has seen the indie film Slashers but that is pretty much what 31 boils down to. In that classic contestants on some sick future game show are forced to survive against willing maniacs who hunt them down, that is essentially what 31 is but with a bigger budget. It was great to see Zombie's trademark beautifully ugly set design, especially in some of the earlier scenes, but the setting of what appears to be a disused factory led to many industrial designs where personality didn't really have much room to shine through, though on occasion it certainly does. As always the bloody action perfectly compliments these grimy sets, something I doubt I will ever get tired of.

The meat of 31 is the bad guys who all have so much iconism to them. McDowell for the most part is relegated to speaker announcements, he says his lines with perfect glee, really chewing over them. He is one of my favourite actors and so it was delightful every time his voice came on, even if his actual character only appeared fleetingly. Each of the clowns that attack the group are unique in their own way. It all starts perfectly ludicrously with a Mexican midget dressed like Adolf Hitler, armed with twin swastika emblazoned daggers. Chainsaw wielding brothers are next followed by more, best of which is hands down Brake as Doom-Head. His performance demands attention, the way he smiles, the way he says his lines, it is sheer perfection, he is a magnetic force on screen. If it were not for the bad guys I don't think I would have liked 31 half as much but they make this.

There is lots of violence on show here as is expected with Rob Zombie's way of making films, Their are knife attacks and spiked baseball bats, chainsaws and axes, all are very visceral in their implementation with dashings of blood and even the odd decapitation to let the viewer revel in the horror unfolding. One pretty realistic looking scene featured characters fighting in the glow of strobe lighting, was a headache inducing standout moment.  It all looks great but again going back to the fact that I didn't particularly care about our heroes that was a factor in me losing fear. 31 is a thrill ride pretty much from start to finish but it is not a scary film, exciting yes, but with so little back story of any type given it seemed more than any of his other films to be lacking in scares. There are some great musical choices on offer (California Dreamin' by The Mamas and the Papas a stand out track) and some great dialogue (mostly thanks to Doom-Head), same can't be said of the editing. Time and time again bizarre amateur looking freeze cuts are used to shift between scenes, I did not like the way these looked at all so wasn't happy there were so many of the blooming things. 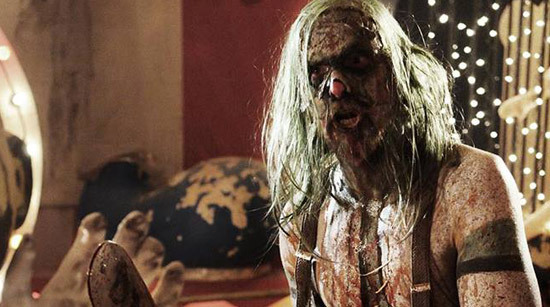 I have criticised 31 a lot but when it comes down to it I spent the majority of the film with a huge grin on my face, happy to be back in the company of such a reliable and dependable director. Much like his music you really can accurately predict how much you will like his movies going in. For me I expected I would love this and indeed I did, but if your after something with substance, and not derivative then you will likely hate this. Even if you do though, you cannot deny Rob Zombie does style in spades...

Posted by Daniel Simmonds at 05:44