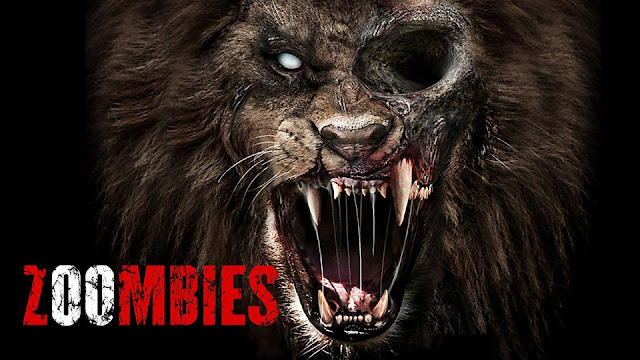 When I first heard of Zoombies I declared it to be the best film ever made based on the fantastic title alone. Zoo animals turning into the living dead; it all seemed so perfect, yet this effort directed by Glenn Miller (Sharknado 2: The Second One, Sharknado 4: The 4th Awakens, Zombie Apocalypse) is sadly as terrible as it's title is great.

A strange virus has infected the monkeys at the privately owned Eden Wildlife Zoo run by Dr. Ellen Rogers (Kim Nielson). While they are being examined the simians attack and kill the veterinary staff and get accidentally freed to run amok in the park, where they quickly start to infect the other animals. Being a training day the only humans on site are a bunch of staff and newly arrived interns, and thankfully the virus cannot be passed onto them. On the bad side though the CDC have forbidden anyone from leaving the sealed complex and so soon the rapidly dwindling survivors must find a way to put an end to the unfolding horror. 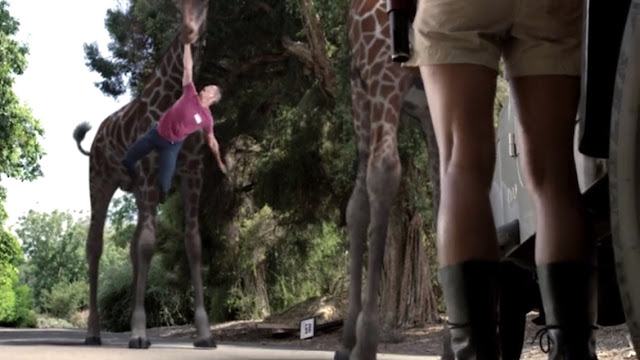 I feel like the title Zoombies was arrived at long before the idea of what the movie was actually going to be about. My first question if I had been in the initial meeting would be 'can you make realistic looking zombie animals?' to which the answer would have been a resounding 'no'. Unfortunately I was not there and so we have an in-cohesive jumble of green screened animals, puppets, very dodgy CGI, and a man in a gorilla suit. This makes every single time an animal appears kinda humiliating as it all looks so atrocious and fake. I understand they could not have used actual animals for their zombies yet the majority being computer generated not only look like they don't belong in the real world setting but look off kilter, as if they were designed by someone who had never actually seen the animals they were tasked with creating. The actors interactions with these creatures are also very bad, early on we get the sight of a man being dangled in the air by a zombie giraffe, a woman who has her eyes ripped out by a rabid monkey, and some of the survivors riding on uninfected elephants, all are a truly terrible vision to witness and made me embarrassed for all involved.

The acting ranges from average to mediocre with a cast of dull stereotypes who for the most part fail to elicit any type of emotion from the viewer. You have an obnoxious spoiled brat, a jobsworth (admittedly he has a character arc that improves him), a hard woman, and all kinds of identikit zoo keepers. I guess with the terrible script they could not really do too much and there are some lighter moments but in general the tone is semi serious and at odds with the ridiculous goings on. The plot is simple but also surprisingly dull, I found myself fighting against falling asleep towards the end. To counter this I did make a list of all the zombified animals we see. We have monkeys, lemurs, parrots, a hawk, a gorilla, lions, and even undead koala, the variation was good but like everything else here these all look for the most part awful. 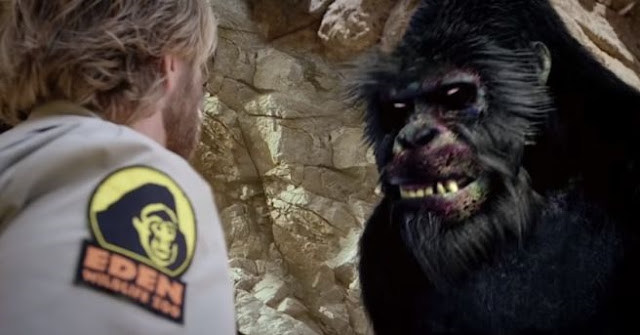 I appreciate the monkeys were free to roam the park, as were the giraffes shown to be, but what isn't so obvious is how every other animal managed to escape their enclosures. Sure it is a Safari park but lions and the gorilla for one thing would never have been free to wander around what is one big open space, and how a zombie koala bear ended up in the admin block was a complete mystery (though leads to a little girl going all Negan with a baseball bat on it). Scanners are used a lot to track the animals but for some reason only infected animals show up as red dots rather than the default yellow, no idea why. Also Rogers spends much of the film trying to work out where everyone has gone despite being in a room full of surveillance monitors. Other plot holes and mysteries? The reason the staff are not helped by police is that they are told the CDC have to arrive first, yet a random S.W.A.T team appear for no reason just to be killed off, no idea how they even managed to get in the sealed off park. The reason given for humans and weirdly just the elephants not being infected is that they 'are top of the food chain' which makes zero sense, as does the explanation that animals in captivity must devolve or adapt. The message of the film seemed to be that humans should protect animals rather than kill them, yet later on this is certainly not the case with this often repeated message simply forgotten about.

For all my complaints about Zoombies I actually found it to be fun if only in a very silly way. The very idea of zombie animals is pretty cool, if only the execution could have been there. I understand this look is what the director had purposely gone and it does match the stupidity of the central concept of the Sharknado films but it just does not work. No matter how fun this is to watch (refreshingly non sexist also) I just can't deny it is near complete trash with one dimensional characters, a terrible soundtrack, an awful script and so many plot errors that all really distracted me. If you have a compulsion to see badly animated monster animals then maybe check it out, it is fun and innocent enough just too much reliance on CGI.