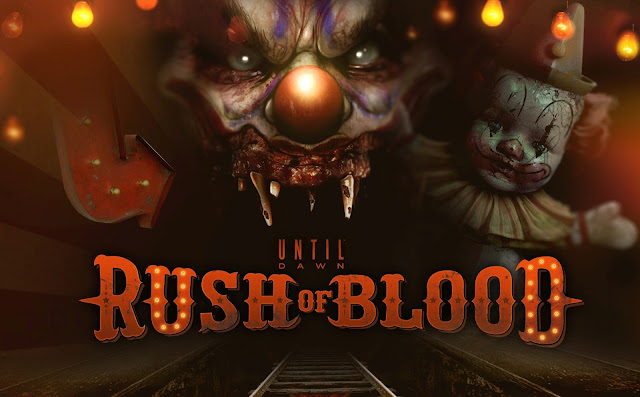 So 13th October and the wait for VR was finally over for me with the release of Playstation's VR headset. My remit for this new device was that I wanted to experience three key things. I wanted to fly like a bird, I wanted to go into space, and I wanted to be scared. Of the launch titles here in the UK there were two horror related ones; Here They Lie (I have this to play but it has received a mixed reception), and the Until Dawn spin off - Until Dawn: Rush of Blood that is an on rails shooter. Thankfully with this game I have been able to tick off my third desire...

Rush of Blood was in development even before Until Dawn had been released and as such this game only has tenuous links to that one. There is only the very bare bones of a story, basically it appears you are an unnamed visitor to a fairground ride, on the ride your carriage accidentally gets sent down the closed haunted house track and from there all sorts of real monsters start appearing. There is strong evidence as you play that the whole ride is all in your head as part of some sort of medical experiment but as I said, very bare bones. I was one of the few that lamented the death of the light gun game genre. The House of the Dead series and others were a lot of fun so when flat screen TV's essentially killed the ability to play them with a light gun I was saddened. Being able to revisit this forgotten genre with modern technology has revitalised it in amazing ways. There are seven stages, in each one you have two guns that you use to shoot targets and enemies that come your way. The whole game can be completed in around ninety minutes which may not sound like much but keep in mind that not only was this a budget title (£15.99 in the UK I believe) but there is legitimately tonnes of replay value. Each level has multiple routes (some signposted, some secret), there are collectable items to shoot that reveal snippets of story, and there is an online score board to work towards, even a true ending should you complete the game on the hardest difficulty. I really don't understand the people who have complained about the length, light gun games of old rarely lasted longer than thirty minutes to do and were much more expensive.

Before talking of the horror I cannot stress how much of a game changer it is being in VR, it really does feel like your in this world, looking around the whole tone is consistent and pretty amazing looking. When enemies attack you up close they really do, they look like they are standing right next to you. The concept of the game taking place on a roller-coaster means at times the track gets crazy, dips made my stomach turn as if I were actually doing them. I was blown away by how physical this world looks, screen shots and videos just do not do it justice. I will say on the negative side that some parts suffer, fire effects are noticeably 2D and flat, some enemies, the birds in particular look very flat also, while characters who talk to you have a strange look that make them look like holograms. A minor thing also but the load screen is abysmal looking like something from the original Playstation. 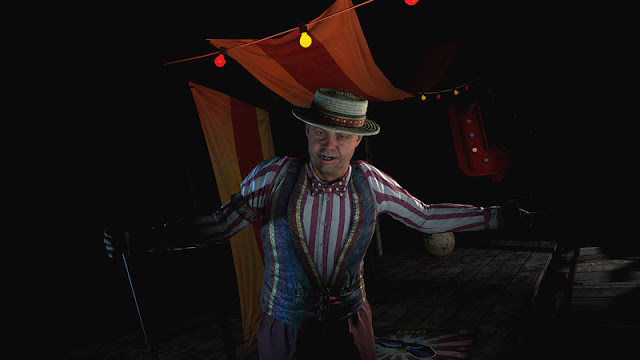 Each of the seven levels takes place around a different location and features unique enemies to that place. I had worried that the game would get samey but thanks to this distinction each level is memorable in it's own way. Haunted Lodge gives you a slow introduction to the world, easing you in by getting you to shoot stationary targets, though devolves into sinister clowns attacking you, elsewhere Ghost Town is very spider focused with a smattering of zombies, while Mines of Death features the Wendigo monsters from the main game, and Nightmare Descent has very unsettling giant pig carcasses thrashing about. Most levels finish with a boss fight that on the whole were all different enough from each other, the whole final level is one big boss fight that is a joy to behold (though can be quite tough). The most memorable is a fight against a impossibly fast moving ghost that was freaky as hell. The antagonist from Until Dawn (a silent masked killer) features a lot initially, personally I found his design to be a bit lame and so it was some relief when he is relegated away halfway through the game, was like the developers themselves realised they needed something better as even when he jump scares you he mostly always fails.

I played Rush of Blood using two move controllers which appear on screen as guns. You have a flashlight on each that helps you aim, as well as illuminates the dark environments, and you shake the controllers to reload. There are limited use weapon boxes throughout the levels that change your default pistols into others such as Uzis and a double barrelled shotgun, I did find it hard to judge how many bullets I had left at any time as you have to physically look down to the cart you are riding in which is rarely a good thing to do. While there is no creeping dread to be found there are plenty of jump scares which are made all the more effective by effectively being in the game. There is intelligent use of sound design to trigger these jump scares at times, a memorable one earlier on has a ghostly figure talking from the right, you look at the voice then as soon as you look back a ghost is right in your face screaming. This made me jump the first time, bizarrely the second time I played through the section I was even more shocked, honestly nearly dropped my move controllers in fright! 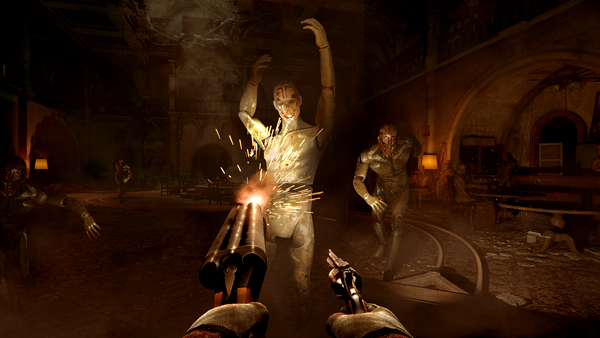 Frankly I loved Rush of Blood, the VR aspect blew my mind, actually being inside a horror game, even one as basic as a haunted house ride added so much atmosphere. I took the unusual step of playing the game to completion twice before doing this review, I wanted to be sure I wasn't just caught up in the VR hype, but no, Rush of Blood is an essential launch title purchase, it looks great, has so much replay value and is a great indicator that VR can actually provide viable gaming experiences rather than just experiences. Check below for me playing a few of the levels...