The Devil Is My Witness (2012) - Short Horror Film Review 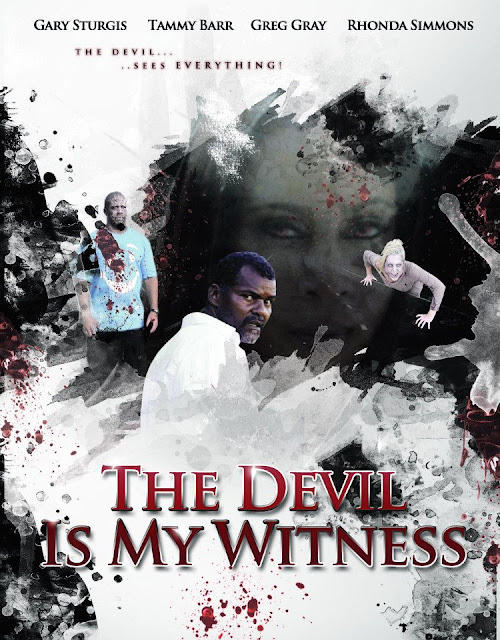 The Devil Is My Witness is a short horror I got sent for review that was written and directed by Gary Anthony Sturgis who also features as the main lead. The short is actually the first episode in TV series The Lost Dimension which seemed to be to be in the vein of Tales of the Unexpected, The Outer Limits, and The Twilight Zone in that it features stories of normal people unknowingly transported to the realm of the bizarre.

Sturgis stars as Larcen Palmer; a famous actor who is found covered in blood wandering the desert by a woman whose car has broken down. Recognising the actor the woman asks how he came to be where he is and so swearing her to secrecy he recounts the tragic events that resulted from his own hubris.

I found The Devil Is My Witness to be an entertaining, inoffensive nineteen odd minutes that while featuring twists that were somewhat predictable was still a fun watch. There are some faults plot wise but for me what saved this was the performances of the actors, in particular Sturgis who fits the role of a hot headed man very well, anger management issues are hinted out and do come to the fore. Meanwhile the rest of the small cast do fine enough jobs, I did feel that any extra screen time and a few of them would have outstayed their welcome as they were on the verge of being bad.

The pacing is not bad, I enjoyed the flashback sequence that comprised the middle third of the film, and the way the first and final acts unite the piece together as a whole. I found the plot to be obvious and for me the resolution was not handled the best, the way it was filmed was pretty cool as was what actually happens it just felt a bit clunky the way it was reached. I think the reason I was sent this particular episode for review was that it had zombies of a kind in it. These zombies whether physical or a manifestation of something else had little screen time which actually worked in their favour, the make up was fine for them, the blood on the main characters shirt looked a little off colour to me, and the sound effects were sometimes a bit underwhelming.

While The Devil Is My Witness did nothing surprising, suffered a bit with it's budget and certainly wasn't scary in the slightest I did find myself enjoying the traditional story type play out, Sturgis had a fun role and his character was flawed enough to seem more than just one dimensional. Check out The Lost Dimension if you want to see this, or episode 2 Feast of the Possessed.