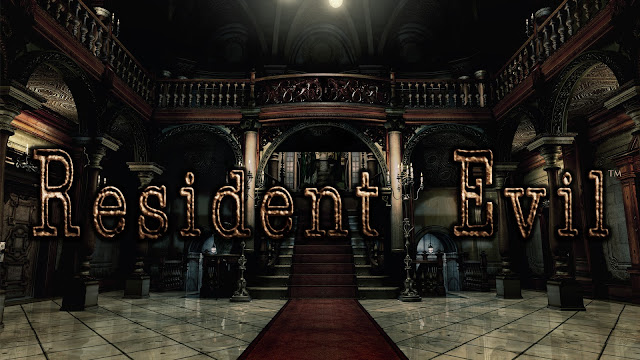 I was surprised myself to see that I had never reviewed the 2002 remake of Resident Evil (unfortunately a review of that one exists, albeit one written badly in this blog's infancy back in 2008). When the remake got released on current gen consoles recently I just knew it was time to revisit this lost game. In a twist on the norm I decided to live stream a single sitting play-through which I did yesterday, split into seven parts those videos shall be included after the review.

So set in 1998 the Raccoon City Police Department's Special Tactics and Rescue Service (S.T.A.R.S) send their Bravo team to investigate bizarre reports of murders on the outskirts of the city. After they fail to report in Alpha team headed by Albert Wesker, and including Jill Valentine, Chris Redfield and Barry Burton are sent out. Soon after arriving in the forest outside of town the group are attacked by a pack of rabid dogs, in the panic their helicopter pilot Brad flies off leaving them stranded. With the dogs hot on their heals the survivors of this attack flee to a mansion they spot in the distance, a place they think will be safe... 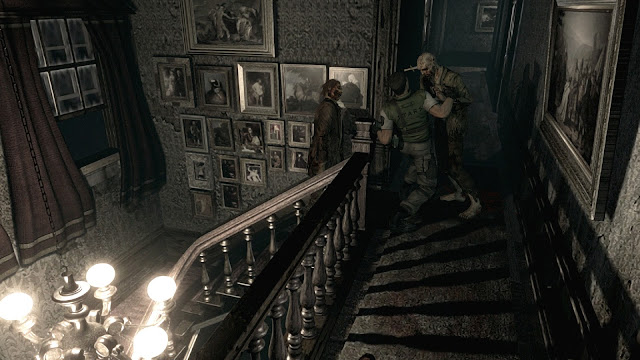 The original Resident Evil is a stone cold survival horror classic, while Michael Jackson's Thriller is what first made me aware of the awesomeness of zombies it is this first game that completed my transition to undead obsessive. For the remake a lot of new areas were added to the game, playing through I was surprised about just how much of the game is unrecognisable to the original, and how much the developers mess with fans by changing things up. I hadn't played the remake for at least eight or nine years, it is likely to be the early 2000's in fact when I did first experience it. Much of the mansion in particular is completely redesigned with chunks of old areas simply no longer existing, the layout of the house itself is totally different with doorways, stairways and corridors where there were none before, puzzles are for the most part completely different and your goals are different. The original's first half had you searching for talismans that were needed to grant you access to the gardens. This time around the main focus you have is locating four skull masks that are needed to awaken a terror chained up in a crypt.

All this newness is fine and dandy but some of the new areas do seem to be there for the sake of extending the game rather than bringing in meaningful things to do. I loved how the caverns that before took you to the final area of the game now actually loop back into the mansion, this caused me no end of troubles as I didn't want to go into them, thinking as I did that I still had things to do at the house. Another way seasoned players are teased is a tiger statue that gives you items if you place a red and blue ruby in it's eye sockets. This time the red rather than give you a new gun instead releases a rain of snakes down on your head! There are quite a few areas though that do seem to be nothing more than long corridors that just add on time to your trip. There is a strange disconnect for the final area of the game though, where the majority of the game feels all new, apart from the new graphics the layout and virtually all the puzzles are identical here, it felt like maybe the developers just plain ran out of time or money as no effort was made to make the lab different which still feels like a shame after the delights of the newness of the rest. 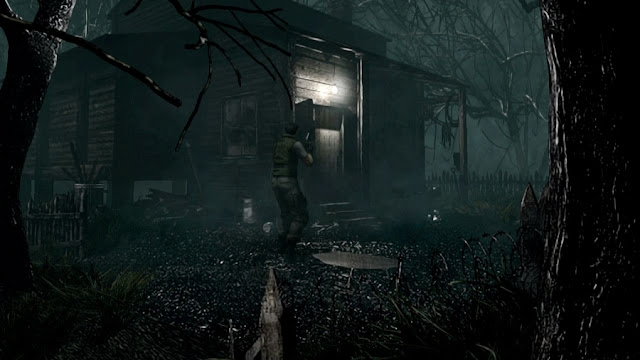 Playing this now after being spoiled with the later better controlled games I had plenty of problems with the fixed camera angles. These constantly change and often it feels like you are afforded the worst possible view with an enemy literally just out of frame, the angle will change to find an unavoidable attack. On the plus side though there are some great angles used, skewed perspectives, and a great use of light and shadow really show off the games lighting. While there is now a quick turn button you are not able to move and shoot at the same time, combat in particular felt a bit off, I guess that's just playing it with more modern eyes. You do now have single use items such as daggers and batteries that can be used to soak up an enemy's attack.

All the classic monsters return to this remake, none have been left out though some have been improved and changed. Zombies now lay where you killed them, after a set amount of time they return as 'Crimson Heads' that are like undead on steroids, though to be fair no where near as fearsome as I remembered and their reanimation can be stopped by destroying the head or burning the body. Zombie sharks now turn up as normal enemies now but aside from that it is the bosses that are most changed around. There are the inclusion of several new boss fights thanks to the new sub plot, while others are changed up a lot. The giant snake for example is now fought in a totally different place in the game. There seemed to be the same amount of weapons but there is now a combat shotgun that I don't recall being there before. Graphics have all been redone and all look great for the most part, there are times where the backgrounds look very flat and muddy betraying the games 1990's roots, the cutscenes are universally terrible, all grainy and blurry looking, to be honest I think the original cutscenes stand up far better than these disappointments. The music also was a let down at times, in general it is grand but by the end several notable tunes were reused for multiple areas rather than anything new created.

The plot is as cheesy as it ever was, voice acting has been redone with an edited script, but I do prefer the original. The new sub plot just about fits into the game, I did like the frequent diary journals by the mansions designer who had been left to die back in the 1960's. On the topic of notes to read a lot of them are quite bland, I wish more had been done to have them better written, though a new note that mentions people and things from Resident Evil 2 and Resident Evil: Code Veronica was a cool addition. One novel part of the game is that you can choose one of two different characters, while they go to the same places they have different subplots and characters going on, while some of the puzzles are changed up. Chris for example has less inventory spaces and no access to a lockpick but is tougher than Jill. This gives decent replay-ability in general (for me I near always played as Jill as Chris is a bit of a meat head).

Despite the faults with Resident Evil there is no denying that even fourteen years on this is a fantastic survival horror game, I had more fun than I imagined I would, my single play-through (8 hours, 23 minutes with exactly 100 kills if your interested) was a fantastic time. Don't judge it on it's age, I implore you to give it a go, especially if you have even the slightest interest in seeing what Resident Evil was like in it's heyday. Also this is the perfect remake, the amount of changes mean that the original still has merit and has not been super-seeded by this.

Posted by Daniel Simmonds at 06:08