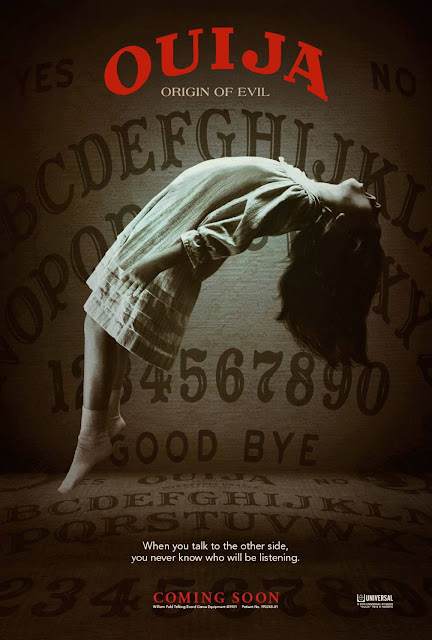 When I watched Ouija: Origins of Evil I had no idea it was actually a prequel to the 2014 horror Ouija. To my credit I didn't actually get a chance to watch that one due to a stingy run time at my local cinema. As such I don't know how it compares but reading up on it, it seems it is set in the same house, but rather than modern day it takes place in the 1960's and chronicles how the evil spirit from Ouija came to be.

Alice Zander (Elizabeth Reaser from the Twilight films) is a fake spirit medium who performs her trade with the aid of her two daughters; teenage Lina, and the young Doris (Lulu Wilson). Needing to add something to her act she buys a Ouija board but it soon becomes apparent that Doris is able to use the board for real, contacting spirits which her mother initially sees as a boon to her business. However it starts to become clear that something is wrong with Doris and that the spirits she is in contact with may not be as benign as at first seems... 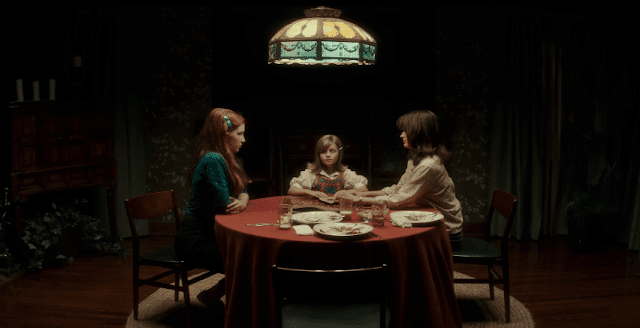 Usually creepy kids in films leave me feeling very cold, they over act, they are smarmy and irritating and I end up just wanting to hit them rather than have a feeling of running in fear. Things do not start good, default Doris is smarmy, she is irritating and I felt that as expected Origins of Evil was going to be another mediocre horror of which there seems to be so many this year. However when the horror actually gets going I found Wilson to be very creepy indeed, I'm not afraid to admit this is the most scary film I have seen since Sinister. It never comes close to the terror of that film but Wilson is a consistently worrying presence. A lot of this is down to the often decent special effects, her demonic form turns her pupils white, while her mouth stretches open to an inhuman size. The camera work also helps a lot to make her horrific, often rather than jump scares the camera will focus on a character in the foreground while she does messed up things out of focus in the background.

While nearly every scene Wilson is in is unsettling it is a shame that the plot is very familiar with barely any originality. Firstly the setting seems to be one that so many horrors are doing nowadays, such as The Conjuring series and The Quiet Ones. The actual demon first appears with a look that was a clone of the one from Insidious, while the story of a priest trying to help a family deal with this evil is as unoriginal as they come. It is a good thing that despite all these similarities the film is well made and enjoyable enough. Initially the movie was a bit twee, I wondered if it was even going to be a horror but thankfully that was a red herring and when the horror starts it really starts. Not everything is perfect, the small cast do a fine job but there are some silly moments such as a corpse that appears late in the film which results in barely any reaction by the characters, while a dream sequence involving a girl's mouth being stitched up looked as silly as it did for Neo in The Matrix all those years ago.

The special effects for Doris are very good but aside from that there is not much going on, the horror revolves around this character and she does indeed does do some twisted things (making a school boy use a catapult on his own face, describing in great detail how it feels to be strangled to death to Lina's boyfriend). There is not really any sub plot going on with everything that occurs feeding back into the main story. With the title being Origins of Evil there is actually a pretty silly explanation for everything, while the frequent references to the families deceased father is an obvious set up for later events.

For actually featuring a creepy child this film should be commended, however despite strong performances all around (aside from a few minor characters) this just doesn't do enough to stand out from the crowd, it is a good watch but I very much doubt it will stick in the mind for long. On the plus side it has made me want to give Ouija a view to see how it ties in.