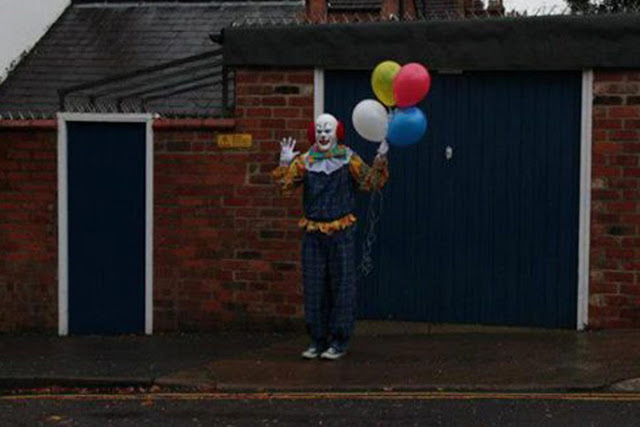 I'm sure a lot of you would have heard of the bizarre craze that is currently sweeping the globe involving creepy clowns. It is stated to have started in America earlier this year but in fact I have traced it's origins back to my home town of Northampton. Back in 2013 if you recall the Northampton Clown haunted my fair town, the news made all corners of our fair Earth. In the end it turned out just to be a local student, but it was fun while it lasted.

This latest clown influx from all reports is not so innocent as the original was. The Northampton Clown was content just to hang around waving at people, this latest batch not only hide in places where they can jump out and scare people, but they also are known to chase their victims, usually while holding some sort of fake weapon such as a chainsaw or machete or some such thing. Reports of these clowns this year first originated in America, I recall hearing about police on the search for these people who apparently were hanging out in woodland and trying to lure children to them. Since then there have been reports of them all across the USA, Australia, UK, Russia and many other countries. At the right time and place these outbreaks could be funny, but hearing of young children being targeted, and the use of weapons no matter how fake makes me think it has gotten a bit out of hand. In Blackburn, UK for example a man at a cash machine had his hand slashed by one such prankster armed with a knife, while  another UK report spoke of 17 year old Owen Russell who had to have stitches after a 'hilarious' clown threw a sharp stick at his head. These clowns should stick to horror films where they belong. With Halloween fast approaching I expect these appearances to reach a crescendo and then fade away. 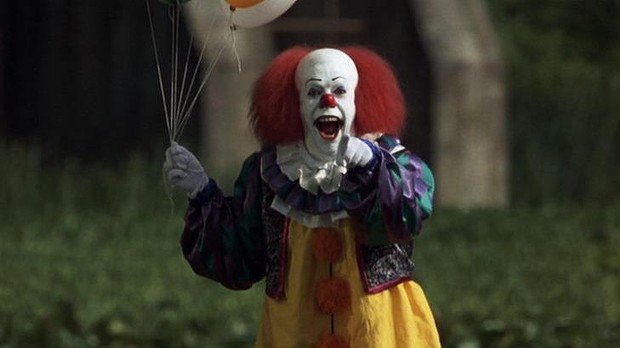 Of course the first thing that comes to mind when you think of clowns in horror films is Pennywise (Tim Curry) from It, others to me are Captain Spaulding (Sid Haig) from House of 1000 Corpses and The Devil's Rejects and even the memorable appearance of the zombie clown in Zombieland. Infographic time now, this is one I was given that chronicles notable evil clowns in horror films...after lots of fiddling around I can't actually get it to fit on this blog, but if you wish to read it you can find it at the Halloween Costumes website. I have had a look at the actual site and it does seem legitimately good, not just because they contacted me and in no way have given me anything to say that. There are some awesome looking horror things on there including a Freddy Kruger Collector's Mask. Sure they did ask if I could mention that, but have a look, it looks pretty awesome (and has a price to match the quality).
Posted by Daniel Simmonds at 01:23