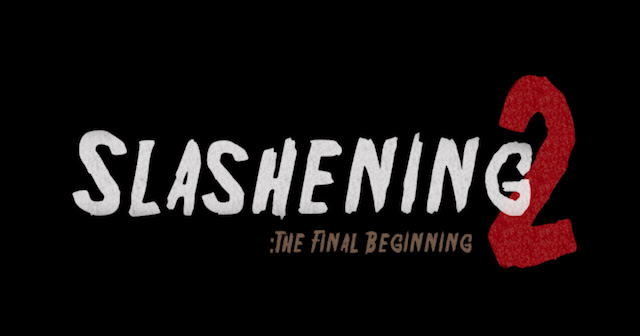 Brandon Bassham; the writer and director of comedy horrors Fear Town, USA and The Slashening is looking to make his next feature film Slashening 2: The Final Beginning. This is obviously a sequel to 2015's The Slashening which I felt was ok but relied too much on jokes revolving around sex and bodily functions rather than poking fun at horror tropes.

Slashening 2 takes place five years after the events of the first film. Madison Santangeli (Addie Weyrich) moves to Brooklyn after her fathers suicide and becomes caught up in a series of murders committed by a familiar looking killer.

There is currently an Indiegogo campaign going to raise funds to make the film. Fear Town, USA had a budget of $10,000, while The Slashening had $6,000. For this sequel they are hoping to raise $10,000. Currently $3,465 has been raised and with 19 days left there is still time for them to reach their goal. As well as Weyrich a few of the actors from the previous films are on board, including Patrick Foy who was a stand out of the other films, both times playing the same character, I really hope for this one he again plays Pat. Lloyd Kaufman (co-founder of Troma Entertainment) is also going to be in the film in what I assume will be a bit part.

It is hoped Slashening 2 will be bloodier and dirtier than the films that came before. For me while they were not bad I did feel more focus on the horror aspect of the comedy would benefit them so hope there is more of that this time around. Gotta say I dig the title, very in line with traditional horror sequels. If you want to contribute to the campaign then head on over to the Indiegogo page (here) where there are a series of perks based on how much you donate. I wish them all the best on their campaign, check out the teaser trailer below...