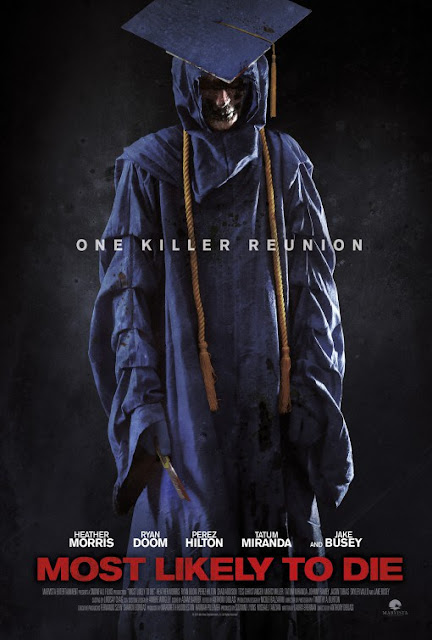 Most Likely to Die (directed by Anthony DiBlasi who also directed the competent Last Shift) is a slasher that I spotted on Netflix, it is up for nomination in this years Fright Meter Awards so gave it a gander. Despite a low score and featuring one of the most ridiculous killers in recent memory I went in with somewhat of an open mind.

A group of friends meet up the night before a 10 year high school reunion. They all happen to have been part of the senior yearbook committee who just so happened to have played a nasty prank on one of the students in their year. Soon they find themselves on the receiving end of a sadistic killer dressed in a graduation gown and cap who seems determined to butcher them. Is it the work of the student whose life they ruined all those years ago, or is it someone who is closer to the group?

Most Likely to Die sticks extremely rigidly to the conventions of the slasher genre, painfully so it could be said as it suffers from a lack of any real originality seeming like a throwback to 90's horrors such as Scream but without the self referential wink and nod at the audience. The small group are constantly splitting up for the most pathetic of reasons, the killer is somehow able to teleport large distances showing up in vastly different locations between scenes, we even get one character saying "I'll be right back" with a very straight face.

The characters are a vapid lot and as befitting their roles in high school they are quite a stereotypical bunch with a joker, a jock, a camp guy, a slut etc. The actors do the best they can in the circumstances but the script is terrible and their actions all very unbelievable. The main heroine Gaby (Heather Morris) has an awkward feeling back story about being a world class poker player, characters act really bizarrely seeing as how they are dealing with a brutal murderer (not seeming too bothered at all by what they are going through), one character spends much the film outside randomly running around with seemingly no reason, and overall every single one of the pretty much unlikeable cast have wafer thin personalities that no amount of back stories can fix. 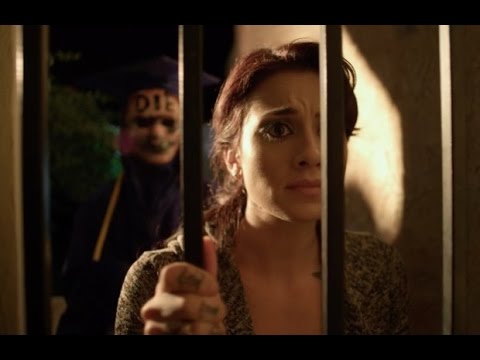 The part where Most Likely to Die redeems itself is some of the inventive kills on offer. The initial concept that each of the group are killed according to their superlatives written in their year book (such as one with the blurb 'most likely to have her name up in lights' who is then found with their throat slashed and tied up in fairy lights that also happen to spell out her name) was a nice idea but is pretty poorly handled. When the body count includes a few who were not even in the yearbook then that whole notion fell apart a bit and I wondered why they even bothered including it. Initially the kills were pretty tame but later on there was a pretty awesome one to be honest when the killer throws their graduation cap like a Frisbee at someone, it embeds in their neck and they then proceed to slice the poor victims head off! The later half of the film does have some fun moments with some nice looking special effects.

Talking about the killer; dressed in a very bright blue graduation outfit and with a silly looking paper mache mask he hardly struck terror, even his weapons of choice were pretty lame (a medium sized craft knife and a big rope) the use of classic camera angles did make some parts effective, and I even slightly jumped when the slasher popped into one scene. Also I did really enjoy the ending that I felt was very effective even if like the rest of the film quite predictable. By the ending I mean the actual end, not the tedious scene where the killer reveals who they are and explains their motivations.

Most Likely to Die is not a great film at all, it follows the slasher template so closely that I did wonder just what the point of it was. It did nothing I hadn't seen before and if not for a few inventive kills I would not recommend it to anyone. However, if you are drinking and want a trashy film to rip apart, or even just miss the slashers of the late 90's then this possibly could be the one, just be sure to leave your brain at the door as there is no intelligence to be found here.