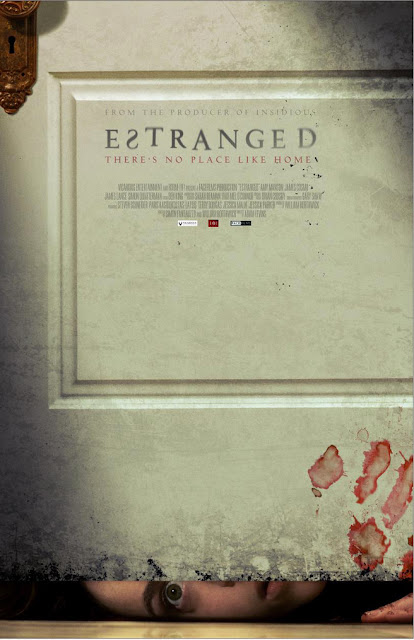 Well when my best friend said she had recorded a horror film on her TV for us to watch I assumed she had obviously made a great choice. As is the way I like to do things I went into Estranged with no clue as to the premise. Afterwards I was surprised to see it was just last year this sparse film was released.

After a motorbike accident with her boyfriend Callum leaves January (Amy Manson) wheel chair bound and with near complete amnesia she returns to her stately childhood home with him to recuperate around her estranged family who she apparently hadn't seen for years. She is met by her mother and father (James Cosmo), as well as her brother Laurence (James Lance) and sister, all of which are very odd people. The dad enforces stern rules on the household, while Laurence is very inappropriate to her, plus it seems the nervous butler is just itching to tell her some dark secret but is too afraid to do so. Not long into her stay and her boyfriend vanishes, the family tell her he left due to an offer made that he couldn't refuse. Some time passes and January starts to suspect these four people (who to her with amnesia are perfect strangers) may not be exactly who they state they are... 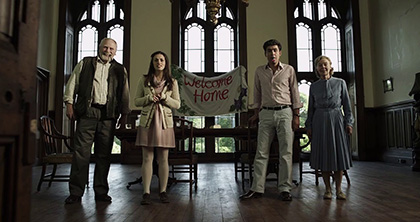 Estranged is a miserable, depressing, bleak and weird film that I did not enjoy watching. The subject matter is not a nice one, this is coupled by decisions made by characters that just baffled me. It isn't long into the film when things go very odd. The family have such bizarre interactions with January that straight away it is glaringly obvious something is not right. The all too brief prologue doesn't give you enough to make you care about either her or her boyfriend and as such I could not care a bit about them. As the viewer we only really see her after her brain damage and so she is pretty much a shell from the off making all the horrors that she endures less affecting than if she were someone we cared about.

The majority of the film takes place in a dilapidated old mansion with sparse furnishings. I felt the sting of a low budget here, it made sense in the plot for the house to be empty, but some more personality to the place wouldn't go amiss. At one point it seemed a huge fire was going to occur, I had a strong feeling that due to budget constraints the fire wouldn't happen and low and behold it did not. The kookiness of the main cast just didn't really keep me interested Lance is probably the best character, coming across as an elitist idiot, he did a good job here with some great delivery and the perfect look. Cosmo as the father is also fine, a very nasty person but has the desired effect and commands power. The other characters are all not bad with the exception of January who just didn't feel right as the heroine due to really strange decisions her character makes. 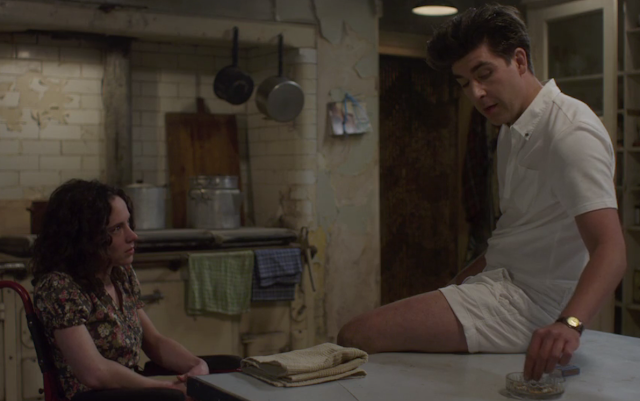 The woman in peril trope felt like a step backwards to films of recent times, January is pretty much useless, initially she is injured but later on when she has healed slightly she alienates the viewer by making ridiculous choices. Upon suspecting these people are not her family rather than keep this knowledge quiet and look for a way to escape she instead almost shouts it from the rooftop making her a prisoner in her own home. At time out of the two sides hers seemed like the more insane and creepy, things are wrong when on occasion (early on) I felt she was acting far worse than her captors. There was a nasty rape scene that was uncomfortable to watch, certainly horrific but didn't make me any more inclined to think of January as a character I cared for, it's a shame she irritated just as much as the antagonists did.

The camera work isn't bad, a few decent shots and some satisfying moments later on, but the editing is not the best and how some of the scenes play out just disappoints, no real stand out moments. The plot was quite basic and the twists mostly unsurprising, though I guess the plot was the highlight of the movie, though the character motivations were sometimes bemusing and don't explain how things got to how they were. Recurring flashback dream sequences are used to show January's forgotten memories, but it just keeps going back to the same sequence and the whole thing looks blurry in a way that seemed quite amateur. 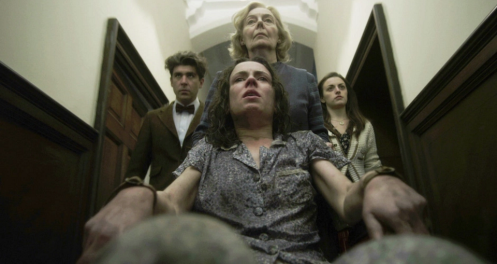 Estranged certainly is not an average film, the strange vibe and decent acting (with the exception of blank slate Manson) should be enough to make this good, but it is memorable for all the wrong reasons, with the exception of the character of Laurence there is just nothing light about this, it is deeply rooted in misery and so I left this feeling bummed out by the whole experience.

Posted by Daniel Simmonds at 10:42