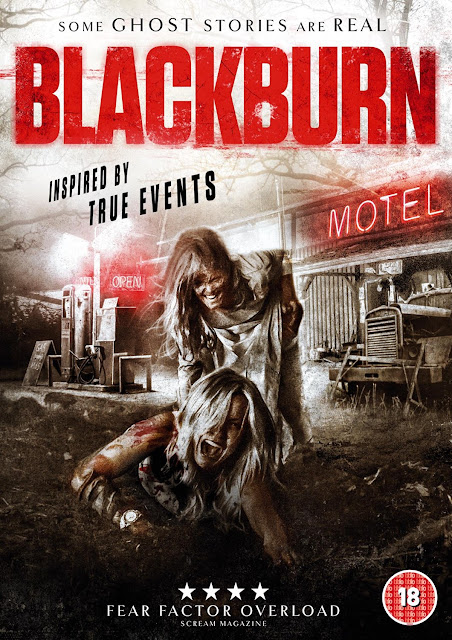 I was surprised to see that not only was Blackburn (also known as The Blackburn Asylum) not a film about the life and times of DJ Tony Blackburn, but it was also nothing to do with the football club Blackburn Rovers. Instead it is an indie B-movie horror based at a gold mine that was filmed in just 14 days and directed by Lauro David Chartrand-DelValle.

Jade (Sarah Lind of WolfCop) and her four moronic student friends have travelled to the remote wilderness to stay at a cabin, however they find the roads they need to take blocked by both a rock-slide and a forest fire. Eventually out of petrol the group decide to go take a look in a disused mine, but they are unaware it is home to a group of homicidal maniacs and soon find themselves hunted. 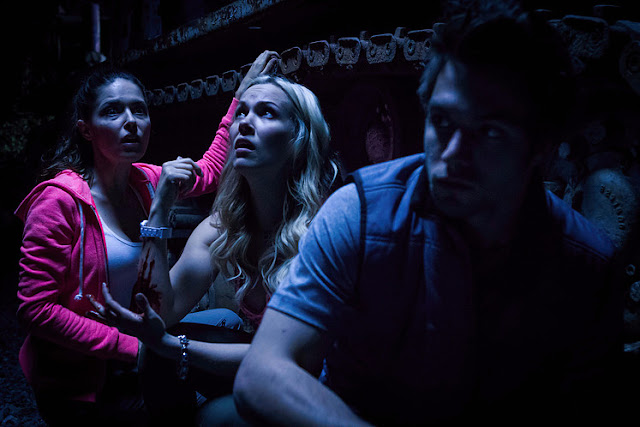 It is obvious quite early on that Blackburn is content to tread the well worn path of previous horror films and not actually try to do anything at all original. I got an enormous sense of deja-vu watching this and it is no surprise with the amount of tropes the movie puts forward. The main cast of college students are a highly irritating bunch, among them you have the stereotypes of the joker, the princess, the jock and the nice one, all act just as you would expect. It was no surprise to see some of the group are cheating on their partners (going off to have sex despite being in a creepy mine and having seen a dead body). Later on doubling down on old ideas we have a girl who while being chased falls and twists her ankle, Blackburn is also full of painful exposition, this is especially apparent early on where the cast pretty much narrate their every decision just in case viewers watching are confused. The convoluted events that get them to the remote mine in the first place are ridiculous, one of the cast even suggests that the mine would somehow be a good place to spend the night (seeing as how their car is out of petrol due to totally coincidental road closures).

When the horror starts it is again just content to go through the motions, the villains of the piece are badly burnt asylum escapees, three of them in total. The make up reminded a bit of Wrong Turn but these have less character to them. There is a huge hulking silent guy who reminded me of a budget Jason Voorhees, a more wiry one, and their leader; a woman in a wedding dress (who actually had some lines even if they were hammed up). The make up was ok, it's more satisfying for the body damage effects such as sickles in the back, and a silly looking but fun eye removal. The violence can be bloody at times but usually deaths are fleeting or start or finish off screen. The editing wasn't really to my tastes, the decision to occasionally put the film into slow motion, or to put blur lines on characters as they look around gave quite an amateur feeling to Blackburn, like a made for TV horror. The reliance on average looking CG for things such as a house burning down and a rock-slide was regrettable but this is balanced out later with some real fire that look quite cool. 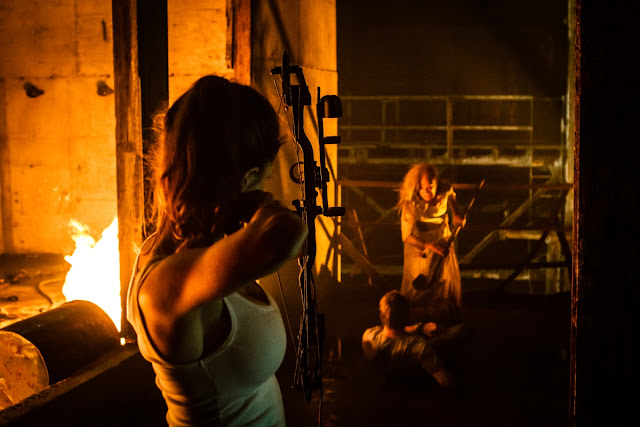 This revels in being a B-movie, in tone it reminded me of films from around the early 2000's. The plot is basic and full of giant plot holes that threaten to overwhelm whenever you stop to think about them, while the cast are all so unlikeable that I was looking forward to them getting killed off. I liked the flashback explaining how the mine came to be full of psychos but again it led to more plot holes. The main device of the crazies having abducted a baby leads to plenty of reasons for the cast to repeatedly head back to the main location whenever they get away, the abduction in itself was silly (the prologue has a man and inexplicably his wife and baby son travelling to the abandoned mine as part of his job). I must mention the end credits though which were amusing, the credits first list the actors of characters who died, in order of their deaths, then lists the surviving characters and their actors, hadn't seen it done like that before.

I don't think Blackburn was ever designed to be a ground breaking horror, I feel it was made as a fun piece of escapism and at times it is a fun watch, it certainly ramps up in the second half. For me I just could not shake the feeling of having seen it all before, with zero new ideas on the table it fails to stand out from the crowd, occasionally it comes together but not enough for me. . Blackburn came out on DVD and Digital on August 29th courtesy of the guys and gals at Solo Media and Matchbox Films, check out the new UK trailer below to see if this takes your fancy.