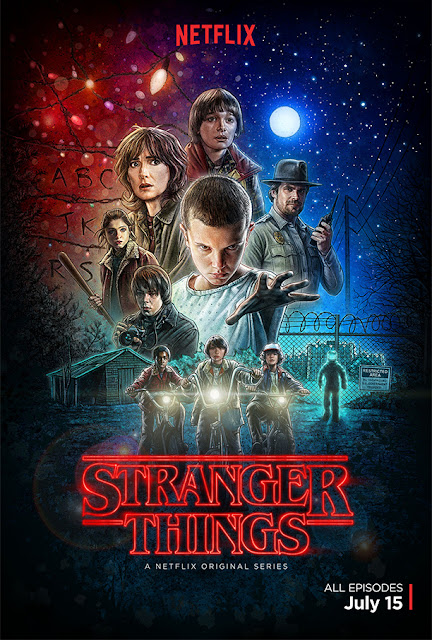 Straight away I am going to admit that I doubt this review will do this TV show justice. Before watching Stranger Things I had heard nothing but great things about it, I had heard it had great acting, a great story and that it felt like The Goonies in serial form. While the show did turn out to be different than expected over the course of a concise eight episodes I found myself drawn in to the strange events. There will be unavoidable spoilers here so be warned.

Stranger Things takes place in the eighties, in a small, sleepy American town, the plot revolves around Will; a young boy who while cycling home from a day of playing Dungeons and Dragons with his geeky friends Mike (Finn Wolfhard), Dustin (Gaten Matarazzo), and Lucas (Caleb McLaughlin) vanishes into thin air. This leads into no end of strange things occurring in the once quiet town that include alternate dimensions, fearsome monsters, and the appearance of a psychic girl who has escaped from an ominous government facility... 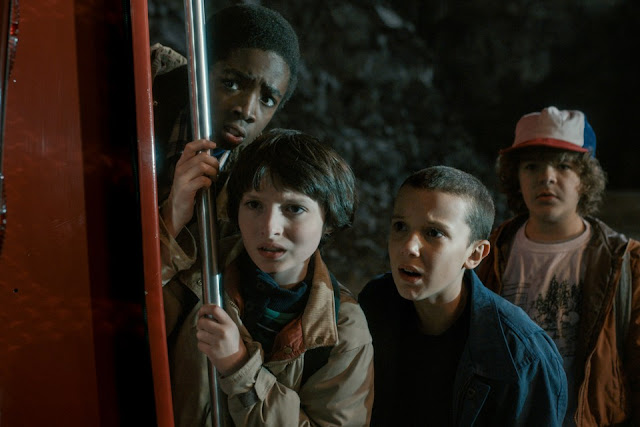 I wasn't immediately hooked truth be told, I had heard this was like The Goonies and so had expected a much more light hearted approach than what was actually done, I was slightly taken aback by how bleak and serious it was. The first episode in which Will is abducted by some creature was pretty creepy. After seeing the second episode I felt that I was too worried for the characters to want to watch more than one at a time. This soon changed though as by the third episode I was completely captured, in love with the great acting and the setting that just effortlessly reeks of the eighties, from constant non forced references the kids make (such as Dustin constantly referring to someone as 'Lando'), to the music, posters, way people dressed, all very nostalgic and I can see this is what people loved so much. It helps that nearly every single episode ends on the hugest of cliff hangers that just make you desperately need to see the next.

There are three main plot lines going on and thankfully each feature great actors. The children's plot is the funniest, their discovery of the psychic girl Eleven and her powers lead to some fantastic moments. It follows the eighties tropes of kids adventure films such as division in the group, and while it stops short of a preparation montage we do even get the classic getting revenge on the school bullies scene that reminded me of that great part in The Never Ending Story. The second plot revolves around Will's teenage brother Jonathan and Mike's older sister Nancy who unite over their discovery of a supernatural horror in the town after someone close to Nancy is taken. A stereotypical jock character features in this storyline; that of the girls new boyfriend Steve but I was actually really surprised with how that turned out, just shows that Stranger Things isn't afraid to branch out on it's own rather than stick too rigidly to the styles of the eighties. The last storyline focuses on Will's Mom Joyce who is played with absolute believability by resurfaced actress Winona Ryder. Her apparent fast descent into madness is balanced with sheriff Jim Hopper (David Harbour) who believes her grief is similar to the one he once had after the hinted at death of his young daughter in the past. Here for once rather than be an antagonist the sheriff character plays a key role in uncovering the mystery. These three story lines pass each other by until the inevitable weaving together when the three disparate groups finally meet for a glorious action packed finale. 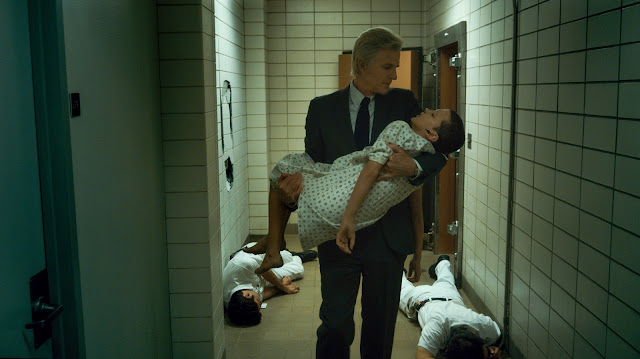 I was pleased at the amount of horror here, each episode had at least a few parts where I felt creeped out, usually with the increasingly glimpsed monster who looks like he stepped right out of Silent Hill, in fact he is very similar to the first boss you fight in the school of that game, I don't know if it is a coincidence that it actually appears in a school at one point in the show. It has the power to pull people into it's own world which leads to some messed up moments when it crawls out of the wall or ceiling to the horror of whoever happens to be near by. It was impressive throughout but by the end when you get to see it completely it did loose a little of it's fear factor with some occasional CGI effects that were on the cusp of looking fake. Another huge comparison to Silent Hill is the whole alternate reality which is like a messed up version of the real world with darkness, dilapidated surroundings and a kind of misty ash that falls everywhere. The special effects for this place are awesome and led to some of my favourite moments when characters unexpectedly find themselves there. There is a lot of eighties based horror tropes here also, the great synth soundtrack and the retro looking intro card, the faceless government scientists and the sinister head of that facility all feel dated in the best possible way.

Stranger Things isn't all flawless though, I did find a few things that niggled at me. There were quite a few flashbacks to show Will before he was taken, these often felt a little bit forced as they would always be relevant to an event taking place in that same episode. The flashbacks for Eleven (the name the psychic girl gives) were much better in my opinion, slowly drip feeding the viewer with the cause of all the horror. Of Will himself I didn't really get a connection with his character before he was taken, via osmosis of his family and friends I wanted him found but not due to himself who I never really got a decent idea of what type of person he was. These are all minor issues though and in all truth at times Stranger Things is near flawless. I was worried how the show would be wrapped up, especially with rumours of a second season in the works, Ash vs Evil Dead had a very disappointing finish but thankfully here enough is tied up that I felt satisfied while just enough was left open for a second running to make plausible sense. 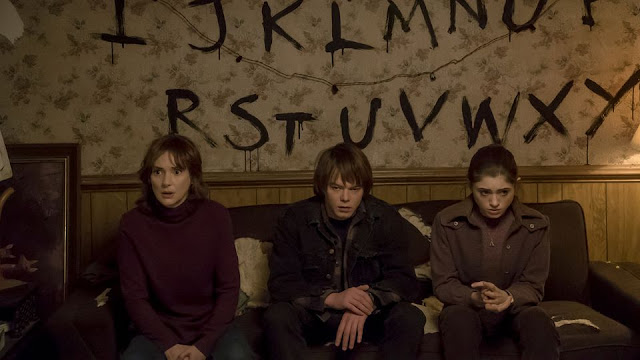 Sometimes a show comes along that is essential viewing even if you don't like the genre (for me that show was Breaking Bad), Stranger Things is another such one. With great directing, flawless editing and amazing acting this tight program needs to be watched and fallen in love with. This channels the excitement and adventure of an eighties classic so well that it is sure to be a nostalgic hit for people old enough to remember, and an insight to just why films of that type are so fondly remembered today.

Posted by Daniel Simmonds at 06:58