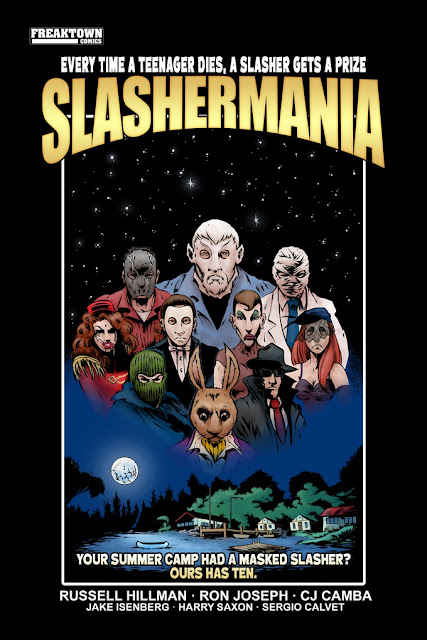 Slashermania is a graphic novel that takes the tropes of classic slasher films as its inspiration. It was written by Russell Hillman and has inks by Ron Joseph, Jake Isenberg and C.J Camba. There is currently a Kickstarter running to get funds to get the graphic novel printed and sent out to people, as well as pay artists for a pin-up section for the comic. I was provided with a rough copy of the graphic novel that featured around two thirds of the story so will provide my thoughts on that.

Set in the early 1980's fifty troubled teens head out to an American summer camp where they are told they shall be trained how to be camp counselors. However unknown to them they are actually there as part of Slashermania 1983, this is a gruesome annual show where for a large sum millionaires are able to watch ten competing prolific serial killers slash their way through teens with prizes given to the killers based on different categories such as 'best multiple kill'. As the body count rises the survivors must find away to survive the slaughter, all the time being watched via hidden cameras by a bloodthirsty crowd.

I loved the idea for this, similar in style to Battle Royale and more specifically the fun low budget horror Slashers which has pretty much an identical storyline (aside from the fact the victims in that one know they are in a game show). Thankfully after reading a large chunk of the comic I can confirm it is pretty decent stuff, in fact I enjoyed it enough that I intend to back the project when I get paid. The story is split between the Slashermania show and the camp. At the show we get two former killers hosting the event who provide a lot of commentary, a lot of the humour comes from here as kills by the deranged murderers are analysed, while score boards are kept. At the camp the plot is more in line with traditional slashers, plenty of sex and drugs and brutal murders. There is plenty of female nudity but this is undeniably a staple of the genre which Slashermania pokes fun at so is required. In some respects this is more mature, at least in dealing with gay characters who do a good job of defending themselves against the more homophobic ones.

The ten serial killers are all quite varied and include a decent enough mix of male and female killers. There was an interesting segment that discussed the killers in more detail as well as provide out of comic context for why they were included. Obviously the setting seems like it is straight out of Friday 13th, to match this we have masked killers such as The Mechanic and Franklin Frost who represent the silent slasher type, elsewhere we have ones who wisecrack in the Freddy Kruger mold, best of which is The March Hare; a smartly dressed psycho wearing a hare mask. Each of the killers have different methods of murder and with fifty unprepared teens there are plenty of inventive deaths. The teens are more faceless but the focus is not really on them, it will be interesting to see how the story goes; if Slashermania stays at the forefront or if the story will go more the way of the victims.

The Kickstarter is running from 13th August to 13th September where the creator hopes to raise £4,500. Currently on day 3 of the campaign £838 has been pledged which isn't a bad figure at all. If you want to back the project or read more about it (as well as download a preview of the comic) then head here. As usual there are an assortment of rewards based on how much is pledged.
Posted by Daniel Simmonds at 11:12