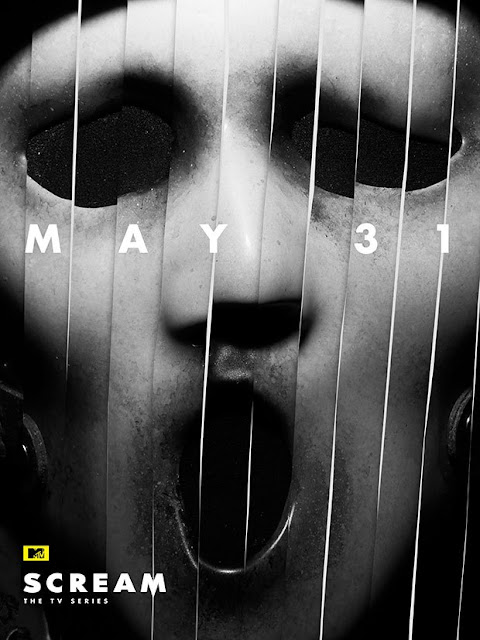 Season one of Scream was an unexpected hit with me, I had heard it was good but wasn't prepared for how much I enjoyed the majority of it. I loved that it was a more mature imagining of the Scream story (albeit still packed with in jokes), I loved the quality of it also, the effects were decent and for me the only let down was the over the top finale. With huge plot holes left open I was interested to see how a second season would fare.

Scream: season two takes place some months after the first one, Emma (Willa Fitzgerald) has been away from Lakewood at a mental institute after suffering PTSD due to the horrors she witnessed at the hands of the now deceased masked psycho. Her return to the small town brings with it a new wave of terror, the original killer had a secret partner who is now looking to carry on the torment, this time Audrey (Bex Taylor-Klaus) is targeted and black mailed into helping this new psycho carry out its sick games... 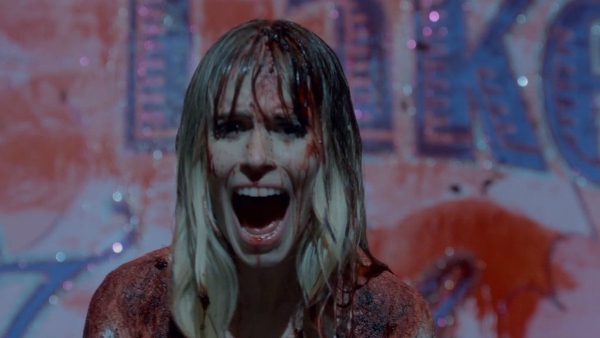 While I again loved this I wouldn't say it is better than season one, for me that show felt so fresh that this can't help but appear to be following in its footsteps. Despite that the many cliff hangers left me desperate for each new episode, having to wait a week each time was agony! Season two does do some interesting things, first off it is a third of the way into the show before the majority of the main characters are even aware a new killer is in town. A lot of the story follows Audrey who is trying her best to cover up things. I thought the focus being on her was pretty cool, it does eventually fall back onto Emma but was a good approach. I had expected an opening twist of one of the survivors being murdered in the first episode and so wasn't surprised to see this happen but it did get things off to a nice start.

Audrey's character development was pretty good, it was nice to get some back story on how she came to get involved with the original killer. It was also good to see Emma's experiences actually having ramifications for how she acts, it led me at times to question if what we as the viewer were being shown was actually reality or just Emma's perception of reality. The show plays with this a bit by her having encounters that no one else is there to witness. This aspect was under developed though in my opinion. Noah has really grown as a character also without losing his penchant for fourth wall breaking by constantly comparing events as if they were all in a slasher film. There are a fair few new characters introduced, Kieran's creepy cousin Eli, Noah's suspicious love interest Zoe, and a new sheriff who brings with him his sinister son Gustavo. It's all well and good keeping the 'who is it?' vibe going but with Eli and Gustavo especially the show goes out its way to make them seem like likely candidates and by doing so made me think there was no way it could actually turn out to be either of them. Season two does a good job of keeping you guessing, all the way up to episode nine The Orphanage (each episodes title is also a title of a horror film) where the majority of the cast are all together when another death occurs severely reducing the plausible suspects. 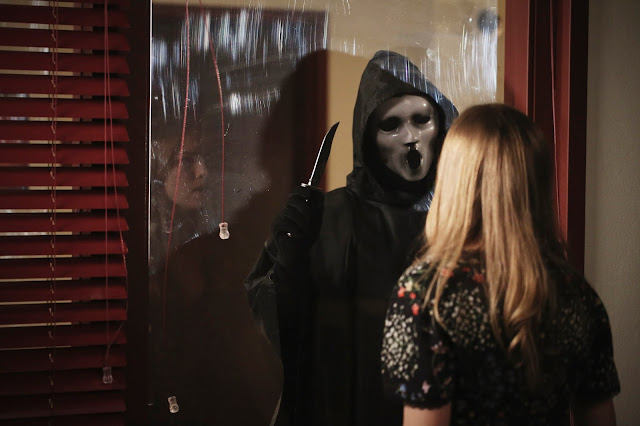 The over arching story relies on you having seen season one, even so my memory was pretty murky so would recommend you either re watch it or read a plot guide before going to this one. With recurring nightmares to do with pigs a lot is hinged on an old farmhouse that seemed key, yet the season ends with that not really ever being explained. We got lots of tech savvy stuff, again phones are hacked, again the killer mostly communicates via the unsettling voice changer. There are a fair few kills once more but this time I felt they were for the most part more functional in nature, mostly they are all stabbings, there are a couple of great ones but nothing like the previous kills. The blood and gore is still there again, but it did feel aside from episode 1 that the core cast were pretty invincible, repeatedly getting captured and led into traps by the psycho but never in any real harm. When the final episode came around I was pleased it was less over the top than before, yet the killer is not revealed until there was only around eight minutes left. Because of this the reveal felt rushed to me, there wasn't enough reactions given by the cast and the motivations were a bit woolly at best, the revealed killer immediately hams up their role so they just seem like a caricature of a crazy psycho rather than feeling realistic.


Season two ends on another cliff hanger, though not as exciting a one, there is a Halloween special coming this October so maybe all will be wrapped up then, I do wonder how many more seasons they could make before it becomes ridiculous. I loved this season though, it had some great episodes; Dawn of the Dead set in the high school during a lock down was especially cool, while a later episode that saw some characters framed and hunted by the police was also pretty awesome. This may be more of the same but it is a well made and very enjoyable show with some occasional great acting (especially John Karna as Noah) and an entertaining story, if you enjoyed season one then definitely check this one out.