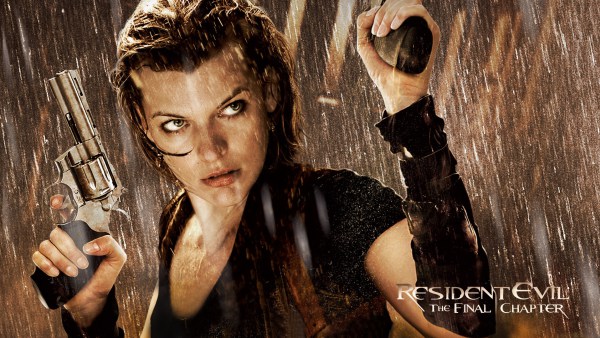 Finally the official teaser trailer for the latest as well as final Resident Evil film has been shown off. This series gets a lot of flack from people, fans of the games think it is too far removed while everyone else seems to be repelled by the style over substance, yet if you sit down to watch them they really are not that bad at all, each has at least a few good moments in it and personally the very first Resident Evil film is probably up there in my top ten horrors of all time for sheer enjoyability.

So today the official teaser trailer was shown off, here's my thoughts on it, it shall also be included below for your viewing pleasure, spoilers of the other films are bound to occur. Resident Evil: Retribution ended with series heroine Alice (Milla Jovovich) at the White House in Washington preparing to take place in humanity's last stand against the hordes of undead. It seems that last stand didn't exactly go to plan as now we see Alice and heading back to the source of all the madness; Raccoon City, and more specifically the Hive (an underground research base) where the evil Umbrella Corporation are planning to wipe out the last living survivors of the zombie apocalypse.

The trailer is set to Guns N' Roses famous Welcome to the Jungle and is mostly a series of fast paced images. We get Alice riding an awesome looking Umbrella branded motorbike, we see an armoured vehicles laden with guns heading into the undead hordes. There is the Red Queen A.I taunting Alice, and scenes of complete devastation, especially with the very post apocalyptic looking Raccoon City. It seems Alice will once again be doing acrobatics whilst fighting armoured Umbrella soldiers, it looks like there will be thousands of zombies (always a good thing) as well as some recurring boss monsters. A giant monstrous bat that seems to have either been taken from Resident Evil 4 or 5, and a lumbering hulk of a creature that I couldn't quite tell what game it was from, maybe something from Resident Evil 6 (that I am quite hazy on, though could also be a later in the game creature from Resident Evil 4).

Feel free to check out the trailer below, regardless of your thoughts on the series I think any zombie film that makes it to our cinema screens is only a good thing for horror fans, there are still (in my opinion) far too few zombie films that make it big. Sure this is going to be a lot of brain dead action scenes and very little actual horror but sometimes that isn't a bad thing. Resident Evil: The Final Chapter is due for release January 2017.

Posted by Daniel Simmonds at 11:35