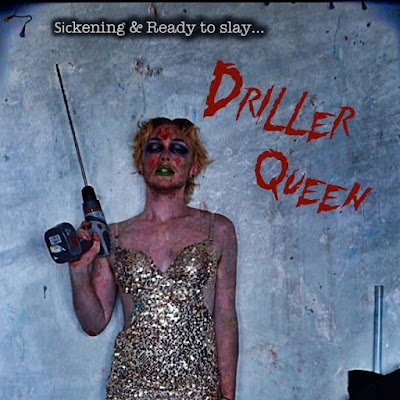 Driller Queen is an upcoming exploitation horror from director, producer and musician Kurt Dirt, it is his second film after Life is Cheap. He describes his latest film as "a cross between 'Party Monster', 'Maniac', and every H.G Lewis movie ever made'. This one is due to follow the style of his first film with a retro look of a shot on video style.

Ida Skinner is a troubled morgue attendant/drag queen who is ridiculed for his bad drag look. One day a female corpse with great hair arrives at the morgue and Ida decides to scalp her to have the hair for himself. Praised for his new look people begin requesting he get them hair as well, but soon he resorts to murder to fulfil the many requests...

Violet Blonde stars as Ida, with a lot of the cast of Dirt's previous film also getting parts. A trailer has been released which gives an idea of the style quite well. The special effects look bad, as does the acting but this all seems very purposefully so, reminded me a bit of Acid Head: The Buzzard Nuts County Slaughter and Music Store Massacre, films of that type can be quite fun. The trailer has fantastic synth music by Polypores, he is also scoring the whole film, so that is definitely a plus. A Kickstarter campaign is going to begin soon for this, so check out the trailer below and if it seems like something you want to get behind then wait for the campaign to begin.

Posted by Daniel Simmonds at 07:42