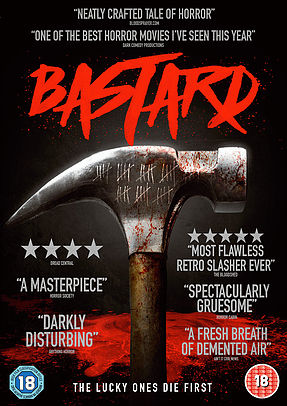 B*stard (as it shall be known throughout this review despite having the cover image shown, no swearing at The Rotting Zombie!) is yet another film that I went into with next to no knowledge. Directed by Powell Robinson and Patrick Robert Young this film is a retro off shoot to the glory days of pure grind house slashers, but with the flair of refreshing modern day effects and camera work.

Newly wed serial killers Hannah (Ellis Greer) and West (Dan Creed) pick up a hitch hiking runaway couple; Betty (Rebekah Kennedy) and Jake (Will Tranfo) and though a small series of events they end up at a bed and breakfast in a small mountain town. They end up going on a hike organised by the owner Rachael (Tonya Kay). Unfortunately unknown to them there is a masked killer on the loose, soon enough the group start to get picked off one by one...

I really liked B*stard, it has a real look of quality to it while featuring some fantastic and really quite grim looking special effects. The cast of odd balls fit the grind house vibe well while the soundtrack was one of the best I have heard in a long time, it brought to mind eighties synth; very danceable, I stuck around throughout the end credits just to jive away in my chair. However as the film went along there were elements which reduced my enjoyment at times and in the end contributed to me lowering my score by one, though as you will see it is still a film high up in my regards.

The layout of the film is something I found quite interesting to see, it starts off with segments introducing us to each of the main five cast. The serial killers open up the film in a scene that was quite reminiscent of Natural Born Killers, while well done nothing can compare to the genius of that film and so by contrast it felt like a bit of a copy. If the whole film had followed that vibe then I would not have been impressed but it is only really used in the introduction to those particular characters. The hitch hiking couple's introduction is not as interesting, this is mainly down to the character of Betty who is made to be the shy, silent type. The last main character doesn't have too much screen time and so managed to feel a little bit surplus. A gay suicidal cop who had some of the funnier scenes but felt a bit under used. The movie for the most part does not take itself too seriously at all (such as one scene where the killer gets smacked around the face in slow motion with a large sex toy), it affectionately pokes fun of the films of old and has some witty dialogue at times, other moments the dialogue is not so great.

We first glimpse the masked killer itself at around the twenty six minute mark, it felt like this was the point the horror really began with a ridiculous sequence that was probably B*stard's biggest send up of the grind house genre. The killer looks great, a hooded figure who appears to be wearing a porcelain doll mask. In a strange twist it isn't that far past this that the killers identity is revealed, half an hour before the film's conclusion, the upside of this is that the psycho is provided with quite a chunk of back story to show their motivation, however the method this is shown didn't really sit well with me. Up to this point the film flowed well, yet the decision was made to show the backstory via static means, relegated to one single room for near five minutes I felt this stunted the breezy nature of the movie. The special effects for the murders (of which there are a fair few) are all brutal looking, both in sound effects and in visuals, it looked like there was no CGI used, with instead practical effects that include a meat hook going through a leg, an axe through the top of a head, and the most grim one of someone's spine being ripped out of their back! Made me wince on quite a few occasions.

Aside from a few moments where B*stard gets a little too serious I had a lot of fun with this, the majority of the small cast are entertaining in their interactions with decent acting all around, while the crisp look, great special effects and amazing soundtrack combine to make a film that is well worth a watch. B*stard was released on DVD and Digital on 8th August thanks to Solo Media and Matchbox Films, check out the new unrated UK trailer below, though the clue is in the description; unrated, so be wary of lots of swearing and gore!