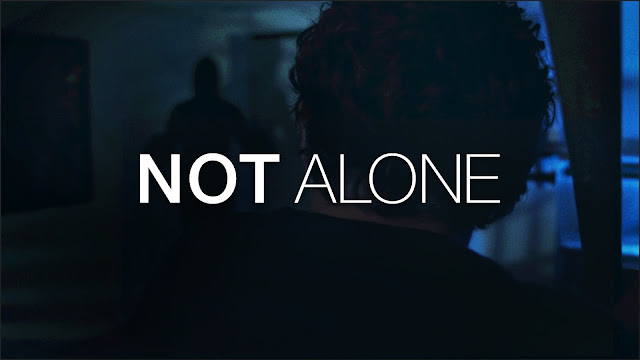 Not Alone is the latest episode in The Witching Season, which as I have mentioned before is a web based anthology show of horror shorts that all take place around Halloween. What I love about the show is that every episode is based around a different sub genre of horror. With Killer on the Loose we had a slasher, with Princess we had a creepy doll piece, and now with the third episode we get one involving aliens.

A man is woken up in the middle of the night and is shocked to see a strange slender creature by his bedroom door. He attacks this figure only to find out his mind was just playing tricks on him and there was nothing there, so he decides to head back to sleep...

This is the best episode yet in my opinion, at around nine minutes long it is the shortest also but it is very tight with nothing surplus to requirements. The piece is framed around a radio talk show discussing a rise in the number of reported U.F.O sightings in the area, I don't know who they got to narrate that but he had a great radio voice. This is the first episode of The Witching Season that implicitly references a previous short, I loved this, the idea that all these different genres of horror take place in a shared universe is fantastic and something I hope to see more of going into the future.

Not Alone is written, directed and edited by James Morris (who also did the same for Princess), while the story is by him and Michael Ballif (the creator of The Witching Season). The plot is very simple and predictable, nothing I haven't seen lots of times before, but saying that it is well made, and gave me my first genuine chill watching this web series. The editing was good, and the initial shot of a night stand shaking with the assumed arrival of a U.F.O was fantastic.

The concept for this series is pretty cool, it brings to mind the excellent Masters of Horror show in that your never sure of what you are going to get next even if obviously the budget is far lower than those. Not Alone is by far the best yet so I will include it below for your viewing pleasure.

Posted by Daniel Simmonds at 07:03