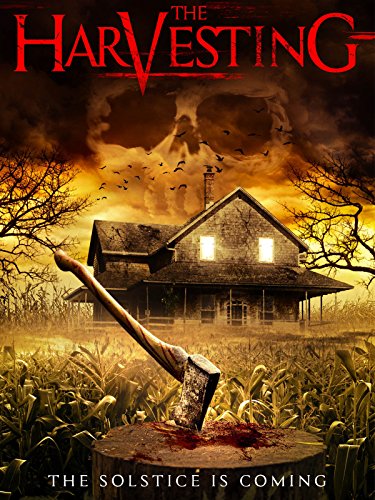 The Harvesting is an American horror that revolves around the Amish. As always I went into this with minimal knowledge of what it was going to be about. This movie reminded me quite a lot of the Children of the Corn series due to the plot revolving around an unseen evil that preys on peoples weakness out in the remote countryside. That is not a bad comparison to make as those types of films are few and far between.

In the prologue an angry young Amish man suddenly grabs an axe and murders most of his family before killing himself. We then follow a family from the city who decide to go on their summer holiday to the countryside. Jake (Chris Conner) and his wife Dinah (Elena Caruso) have been having marital issues and so hope a break with the kids (Steven and Michaela) will help them fix their problems.  However they have chosen a very bad location, the local Amish community seem outright hostile to the four, while the nearby woods seems to contain a powerful evil that from the very outset starts to covertly influence the families minds... 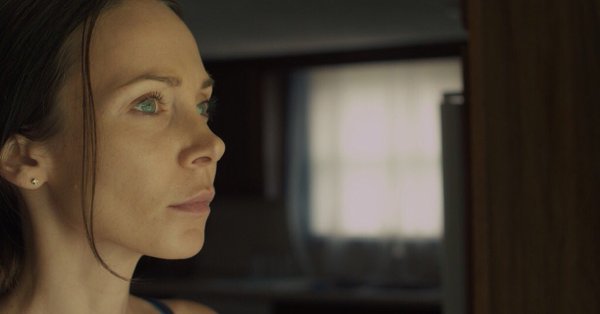 I really hoped I would love The Harvesting, the set up is interesting and the similarities with Children of the Corn also caught my attention. It nearly succeeds in being a decent enough film but ultimately is a little bit too slow paced, the excellent finale can not make up for the mostly uneventful majority. The idea that in the woods resides an unspeakable evil was at times well done, at other times not so much. The long shots of fields with the woods in the distance were nice and ominous, but in the place itself it is not so atmospheric. Rather than this being a locked away location only visited when the plot gets going it is instead a place that characters go to without peril many many times during the duration. I really hoped we would never be shown exactly what this evil was and thankfully we never really do, I wont go into more detail than that other than if you have seen the Children of the Corn films then it is one of the many forms the evil takes in those.

The main plot of the family on holiday failed as I didn't really enjoy any of the characters, or really understand their motivations. At one time or another each of the members in their own way are tricked, the boy is visited at night by the ghost of the Amish murderer for example, while the girl keeps getting visited by ghostly children who try to lure her to the woods. Jake meanwhile does his best Jack Torrance impression, never going anywhere near as far down the rabbit hole as that particular character, but was unsettling enough that I fully expected him to explode any second. It was actually a shame that part didn't really go anywhere. The sub plot was much, much better and is what saved The Harvesting from being merely average. This involves an Amish man and his grandson (who happens to be one of the only survivors from the murder during the prologue of the movie). The Grandfather (a wonderful performance by Greg Wood) is trying to teach his grandson Jacob about the evil and how to combat it. I really enjoyed this part, it felt different to the norm and fed into a great link up with the main plot line that really impressed me. On the topic of plot there is a late plot twist that I admit I did enjoy, but it did also make a large part of the film not really make much sense with hindsight.

Some of the camera work was pretty good, a memorable sequence was all filmed in one take, single take shots always impress and here we even get careful placing of shadows to help things along. The soundtrack was also better than the normal at times, again going back to the Amish subplot the theme that played here was very good. As for the horror The Harvesting is rated 15 so don't expect lots of blood and guts, this was probably the weakest part of the film. The suggestion of hidden danger was very well realised yet when it comes time for actual danger to appear it just doesn't really hit the mark much. The best it can do for thrills is several parts where characters have gone missing and so people are running around shouting, while the ghosts are pretty hit and miss. A cackling woman by a pond irritated more than anything else, but on the flip side to this a creepy dream sequence in which a man high on laughing gas shotguns his family and then himself was effective, if let down by some pretty poor CGI effects for the shell blasts.

I did enjoy The Harvesting and it maintains a real sense of mystery while bringing some surprises out, especially with the linking of the two separate plots. Unfortunately though it can never truly deliver on the suggested horror, it always felt underwhelming to me which was a shame as the build up was always so clever, the family story line I just could not care about due to unlikeable characters. The Harvesting came out on UK DVD and Digital on July 18th courtesy of Solo Media and Matchbox Films, be sure to check it out if it sounds like your thing. I have included the new UK trailer for the film below...do beware though as it does reveal pretty much everything that happens.