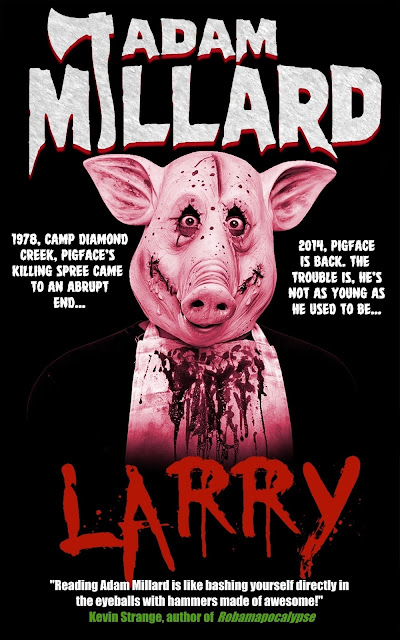 Adam Millard is a regular guest author at the Leicester based UK Festival of Zombie Culture. In the past I have heard him read an excerpt from a zombie book of his, and he once offered to take a photo of me with David Moody (author of the Autumn and Hater series), yet I had never actually read any of his books. Last year I remedied that and brought one of his books to try; Larry, and am glad to say I am likely to read more of his books going forward.

In the 1970's Larry 'Pigface' Travers stalked Camp Diamond Creek killing no end of teens there, that is until one day in 1978 when the final girl finally stopped him. Now in 2014 Travers decides to once again head to the camp site and start up his killings again, but this time he is certainly not as young as he used to be...

Larry is mainly a send up of the slasher genre, more specifically the Friday 13th films, I can't find the part but at one point Pigface (what Larry is known as, as he wears a pig mask when murdering) mentions how he had to choose an axe as a weapon as the machete had already been chosen by another killer. There is plenty of poking fun at the genre, such as the victims when being chased constantly tripping over and illogically running round in large circles much to their own bemusement. The character of Larry is the best part of the book, getting an insight into his thought patterns was pretty entertaining, especially the present day version who is too out of shape to run, and who is struggling to use his heavy axe, as well as his pig mask that has suddenly started talking to him when it didn't in the past. The other characters in the book didn't stick out too well for me, it is a common problem I have of getting confused over who is who in books.

The book itself has a great, attractive design to it that I found quite appealing, and despite being around 200 odd pages it seemed to me really short. I felt like just as I was getting into it it was over. Maybe this is due to Pigface not showing up at the camp until past the books half way mark. This is less a criticism, more that I was enjoying it, Millard certainly has an addictive way of writing that despite me not really finding the many jokes about sex or bodily functions that appealing, and many, many similes I still could not put the book down, and still enjoyed what I was reading. It is plenty funny in other places, I loved the interaction Larry had with his pet pig, and chapter headings were amusing with Millard breaking the fourth wall on occasion. Plot wise it had to be basic, anything more deep would do a disservice to the slasher genre, despite that it was fun, and had plenty of death scenes, my favourite being someone getting a Nintendo controller shoved down their throat!

I enjoyed Larry as much as I hoped I would, it felt like a good introduction to Millard's work, though I believe he also writes straight horror also, so it will interesting to see if he is just as good as doing that also. Sometimes the humour did miss for me, yet it is all written in such a charming way that is was hard to dislike and so is a book I heartily recommend for any fan of the slasher genre.