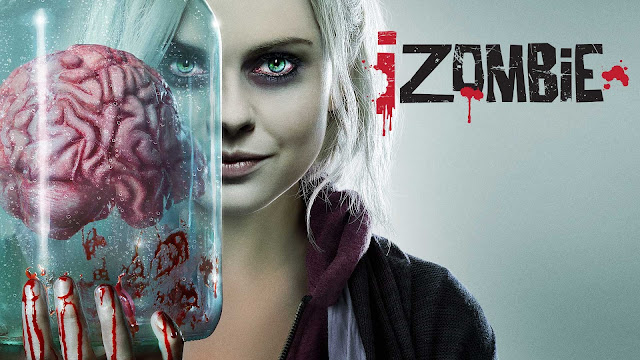 With a name such as iZombie I had no choice but to include it for review on my site, yet despite featuring the undead quite heavily (hard not to when the main character is one of them) this is barely ever a horror, instead it is more of a crime dram with a comedic bent to it.

Rose McIver stars as Liv Moore; a medical student whose life is brought to a swift end after a zombie outbreak at a boat party she happened to be at. Waking up in a body bag she soon realises she is now one of the walking dead and that she requires the consumption of brains to be able to function like a normal human. With a new job working in the hospital morgue with her boss and confidante Ravi (Rahul Kohli) she discovers that eating someones brains gives her the ability to access their memories and abilities. Each episode she teams up with a detective (Malcolm Goodwin) to solve murders. Meanwhile a shady zombie named Blaine (David Anders) sees a business opportunity with the sudden underground zombie outbreak and sets out on an evil plan to get rich... 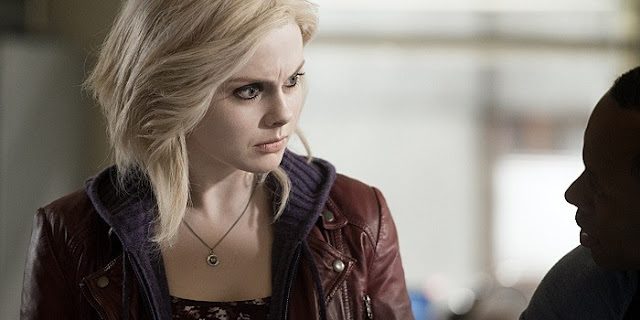 iZombie is a fun show to watch but on the flip side it is not the best show out there feeling quite similar in format to a lot of other detective shows. Obviously the biggest difference is that Liv is undead. Whenever her (un)life is threatened she is able to go into 'full on zombie mode' where her eyes turn blood red and she gains immense strength at the cost of losing her reasoning, these sections were great and was where most the horror of the show occurred. Yet as I said earlier iZombie is not a horror show, in total out of all thirteen episodes this transformation happens to her for a generous total of about eight minutes of screen time. The bigger draw is the variety of different personalities Liv gets and how it affects her character.

Usually each episode Liv will eat one brain and then start acting in a particular way for the remainder of the forty five minutes, this does create some episodes that I didn't particularly care for as much. In The Exterminator she becomes a psychopath after eating a hitman's brains which was cool, then in Astroburger she eats the brain of a crazy person and starts to hallucinate about talking crisp packets and weathermen. On the flip side you have Maternity Liv where she takes on the persona of a mother, it is weird how my enjoyment was determined by this plot device. McIver does a great job in her role, while Kohli is likable and funny. Other characters are more hit and miss with Major being the worst. He is set up with his own subplot (trying to discover what has happened to missing teens) but he is just so dull and unlikable that I found it hard to relate to him. It seems the show writers disliked him too as for the entirety of season one he is on a downward spiral of misery. He gets fired from his job, arrested, beaten up, even spends some time in a mental institute, just a constant slide of bad events. Blaine at first felt like iZombies version of Spike (from Buffy the Vampire Slayer). He seemed to be an anti-hero but kinda cool, he even had the same bleached blonde hair and love of music that Spike had. However with him one of the main antagonists his actions soon made me straight up dislike him also, not a character you can root for, though I guess with him as the bad guy that is kinda the point. 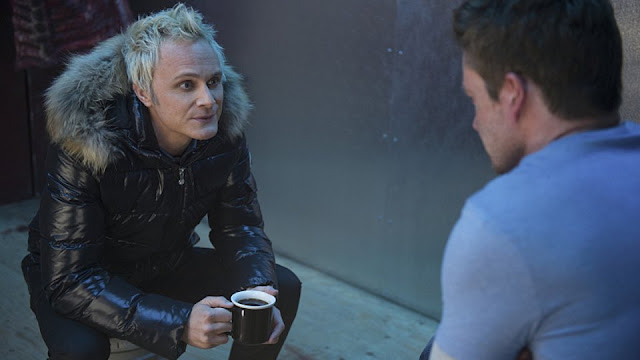 I wouldn't say I loved any of the episodes but they had their moments, it is all fun in a brain dead kind of way. There are revelations galore but none really stuck out to me. The over arching plot of Blaine and the kidnapped teens I didn't find too riveting, it all led up to an over the top action packed finale that was really silly (but entertaining) even if it barely even featured Liv in it. I don't know if they felt a woman doing a big action scene wouldn't work, or if they hoped it would redeem the loser that is Major. The script is decent enough, though I got the impression at times it thinks it's far more funny than it actually is. There are plenty of references to classic horror films (one episode even plays out pretty similar to I Know What You Did Last Summer (which coincidentally has Bex Taylor-Klaus from the Scream TV show in a supporting role) and most scenes are introduced in an attractive faux comic book style (the show is based on a comic that started 2010). I have no idea if the episodes are based on the comic or if they are original stories. Of the zombies themselves you may find disappointment, for the most part they act like normal people and only a handful ever actually seem zombie like in look.

There are so many shows of this type that even the central zombie theme doesn't really separate this too much. Personally I found this entertaining if not something that is particularly memorable, certainly not horror and it has some issues with bad characters but ultimately I don't think watching this was wasted time, and as I always say; there can never be too many zombie related things in this world and this gives an interesting spin on the typical zombie uprising.

Hello, I like your review for the show iZombie for I too was unsure of what to think of it. I am so used to the traditional zombie horror movie or overly comedic variations that I was not sure how the two would mix. I have yet to watch it, but after reading your review I think I will give it a shot. I am intrigued in the idea of a human like zombie. Since the creatures are traditionally mindless, it will be interesting to see how one that still has its human mind interacts with the world.