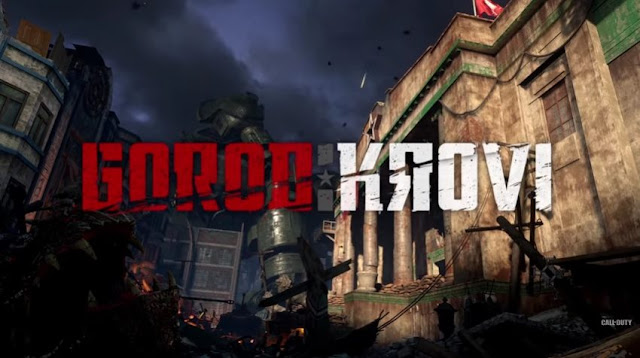 This is going to be a bit of a mess of a blog post as I have a terrible hangover that I just cannot get rid of, a life of purity for me from now on! Gorod Krovi (City of Blood) is the Zombies map released for the third Call of Duty: Black Ops III DLC titled Descent. The first DLC Zombies map was Der Eisendrachen, while the second was Zetsubou no Shima. As always I want to clarify these are my initial thoughts, I in no way believe I have seen even half of what this new map has to offer.

It opens with the best intro cutscene ever for a Zombies map, the four heroes (Dempsey, Takeo, Richtofen, and Nikoli) emerge from a worm hole high in the sky above the war torn city of Stalingrad. As they plummet to the ground they sight a huge fire breathing dragon, as well as this realities version of Nikoli piloting a huge mech suit. This is all set to Motorhead's iconic Ace of Spades song, pretty awesome stuff. 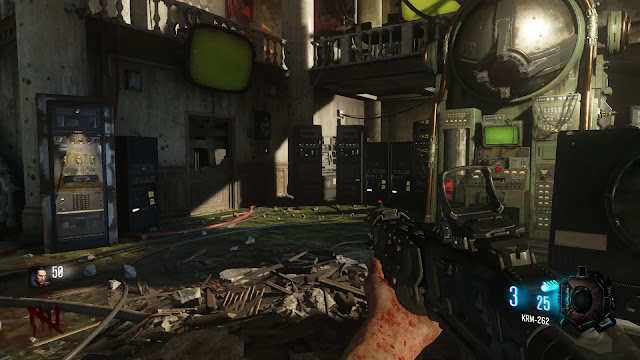 Gorod Krovi is set in the ruins of Stalingrad and encompasses a tank factory, a hospital, a library and other such buildings. The first task is to fight your way to the Dragon Command centre where the switch for the power is located. Once this has been achieved zombies have a random chance of dropping the key for one of three security consoles located around the map, these consoles call in a supply drop that zombies will try and attack. Once the drop has been defended you can get one of three keys for the dragon control computer. While all this is happening there is a huge invincible dragon flying around, he will randomly arrive at an area and breath flames setting all in his path on fire which can be a pain. On the flip side though once the dragon control computer has been activated he will arrive and give you a ride over to a building outside of the map. In this small area you have to survive waves of increasingly tough zombies in order to get some sort of crystal...that is as far as me and my friend have gotten so far.

I seem to always say this but this feels like the best Black Ops III Zombies map yet in terms of the DLC, it is a lot of fun to play and is very well designed with lots of areas all looping back on themselves in interesting ways. There is a lot of variety on show here, you even use a crashed train carriage as a makeshift bridge at one part of the map. The zombies look as cool as ever and as always there are special rounds were different enemy types show up. In place of the dogs and spiders you get a round where flying robot drones turn up and try to zap you with electricity. Initially I found these very hard to beat until I realised shooting the tentacles off of them causes them to self destruct. More scary is the arrival of a Terminator style super zombie who launches projectiles at you, unless you have a special weapon these are very hard to beat and caused no end of panicked fleeing. During the wave survival in the house outside of the map these turn up in huge numbers, pretty scary! 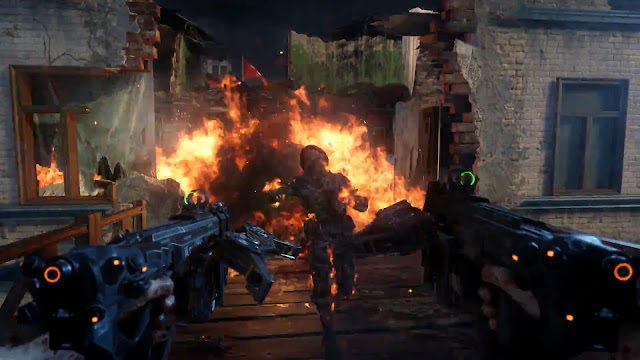 As always new perks are introduced, my favourite being one that cycles through different weapons every ten seconds, and one which for a limited time makes all doors, vending machines and weapons free to open/collect/use. The best surprise for me though was when I got to around round thirteen/fourteen and a recognisable voice started talking; the film legend Malcolm McDowell! He does the voice of the creator of the Gobblegum machines (I believe), not sure what importance that character has but was an unexpected delight.

I am quite certain there is plenty more to discover in this cool new map but that is what my experience has been like so far, I predict it will be possible to use Nikoli's mech suit at some point, and that the dragon will appear as a proper boss encounter also. Just the one new Zombies map left and then that will be that for Black Ops III, I really hope the Zombies mode announced for Call of Duty: Infinite Warfare will be even half as good as this, at the very least on par with Exo Zombies from Advanced Warfare.
Posted by Daniel Simmonds at 15:01

These look pretty dope, but I don't know if I want to invest any money into getting the game! D: Great post!

I’m actually the Community Content Manager for NowLoading.co, and I would be thrilled if you considered cross posting your stuff to our platform. If you don’t know much about us- we’re the same team behind MoviePilot.com, and push to give awesome writers (like yourself) the exposure they deserve. Feel free to email me! tyler@nowloading.co

I suck at doing admin here, thanks for the comment, I briefly tried doing posts for Movie Pilot but didn't like doing extra articles for that when I already don't do enough on this blog. I heard duplicate content is never good so don't want to do that. My dream is to win the lottery so I can work on my blog full time, then I would be able to do things such as you suggest!