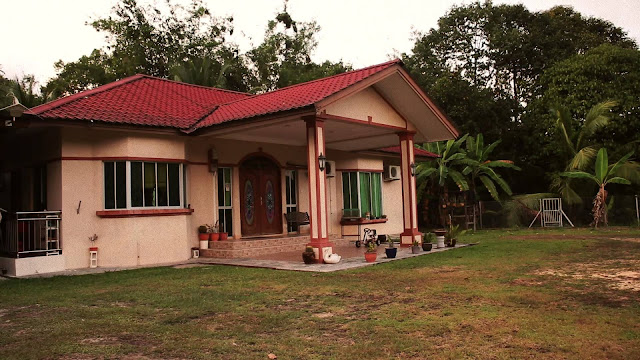 Brunei's premiere horror film creator Abdul Zainidi (Ostrich Supernatural Game, Walking Bangkai, Jentingkai) is back with another short horror he has created; Bitungkal. Like Jentingkai before it this is another film that uses a being from a Brunei children's ghost story as the basis for the evil. The film was written, directed, and shot by Zainidi.

This starts off with a message on screen stating that children should be wary of walking alone in the jungle, and even more wary of accepting gifts from strangers as they could fall victim to the supernatural Bitungkal. We then follow one such child (played by Fadzlie Izzul Iman) who indeed does stumble across a strange object whilst out walking and decides to take it home with disastrous consequences...

Whatever you may think of the quality of Zainidi's films it is hard to argue that he doesn't squeeze a lot out of his short run times. In just over five minutes we get a children's fable perfectly displayed. This short plays out very similarly to Jentingkai and feels like a companion piece to that one. Like that there is no dialogue here at all, aside from the creepy whisperings of the monster, instead there is a song in French that sounds like a bizarre nursery rhyme. The monster itself is a cloaked being who due to some decent editing only appears on screen for all of about five seconds which is effective as it leaves a lot to the imagination.

If I had any complaints it would be that it does feel very similar to one of his previous films, plus when the boy of the short has a seizure at one point I couldn't help but find it funny rather than scary. Zainidi never makes dull films though and Bitungkal is no exception, Brunei as always looks stunning, the location alone makes this feel fresh, makes for an enjoyable enough five minutes.

Posted by Daniel Simmonds at 01:45