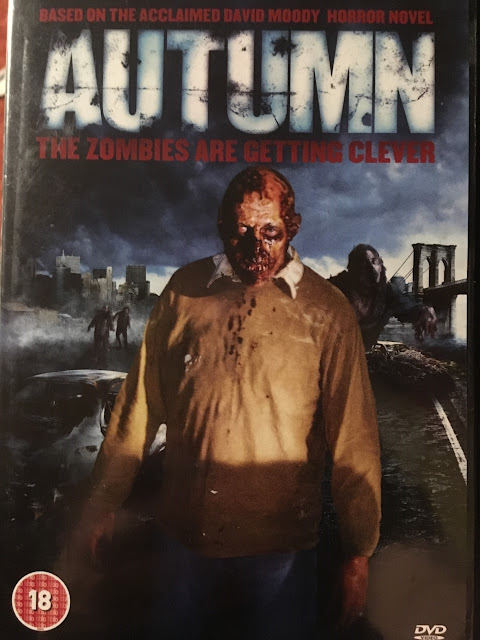 Many many years I have put off watching Autumn; the film based on the tremendous zombie book of the same name, due to it being universally slated. Even David Moody himself (the author of said book) admits the film is hardly stellar, only going as far as to say 'it has its moments' when we talked on the subject once. Well finally I have seen the film, but is it as bad as expected?

A sudden unexplained virus sweeps the globe one day, within minutes the vast majority of the population have succumbed to a devastating and deadly illness. The survivors are few, one such group have gathered together in an old building and are universally lost and despondent. Michael (Dexter Fletcher), Emma (Lana Kamenov) and Carl (Dickon Tolson) decide to leave the confines of the city and head to the countryside where they think the risk of disease will be lower. But as the weeks roll on the deceased victims of the tragedy come back to a kind of un-life. Initially they are mere husks and operate without reason, but slowly and surely they begin to get more intelligent until the point where they perceive the still living with hate in their rotting eyes...

The best thing I can say about this film adaptation of Autumn is that it is extremely faithful to the book, I was impressed by the amount they kept in here, even down to little details such as when Carl witnesses a dog being killed by the undead through a pair of binoculars. The part where the unhinged Phillip Evans is discovered also features, in the book this felt a bit out of place, so here even more so (a bizarre appearance by David Carradine of Dead & Breakfast and Kill Bill). A lot of the initial outbreak is shown via actions rather than a vocal explanation, I feel if it had not been for the book I would have been totally confused what was going on. For all the faithfulness Autumn is let down by an obviously low budget that constantly gets in the way and ruins what should be good moments. Whether it be terrible looking green screen during driving segments, amateur looking credit sequences that look like they belong in a mid 90's music video, or the low quality camera work on offer, all combine to constantly bring Autumn down.

As well as be very faithful there are also a few oddities thrown in that both amuse and baffle. One of these is the addition of a fourth character who decides to leave the city with the trio, this was a bad-boy rebel who gets a brief and utterly pointless side plot of him going with some random woman for sex, drugs, and rock n' roll only to be swamped by the living dead once their intelligence increases. The most silly part of the film resides in a dream sequence Emma has in which she is looking through a window at a huge floating black and white zombie head (!), the low budget certainly does no favours here, to say this part looked abysmal would be an understatement. Another more fun addition was that of a clown, he turns up initially still in complete make-up, threatening the group in the city, later appearing more destitute but no less creepy. 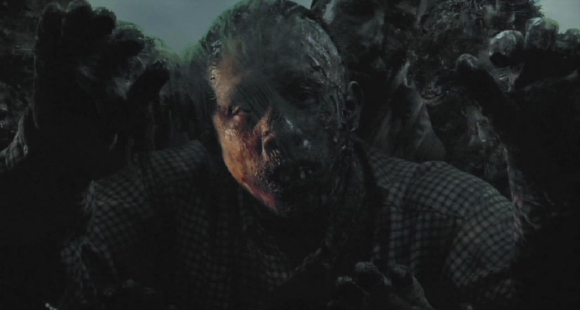 Now the very worst part of Autumn, and what really brings it down is the astonishingly bad editing, the film already looks low budget and so to then proceed with some of the worst editing ever only adds to the weirdness. Frequently during the zombie attacks the camera suddenly slows down or speeds up, it always looks terrible. This is best displayed when the trio discover the zombies have become aggressive. A key turning point in the book, here a bout of slow motion ruins the scene completely. The most humorously crazy part of Autumn comes when a scene with Michael, Emma and Carl sitting at a table pauses out of nowhere. The footage then slowly zooms in to the paused scene while inexplicably dramatic music starts playing for literally no reason whatsoever!

On the plus side the zombies look pretty fantastic, a low budget is one area where it really doesn't matter for zombies, use of light and darkness help to make the undead look messed up and unsettling. Especially towards the films conclusion the zombies look very bloody and alien like. Also to recommend is the acting, especially Dexter Fletcher who is great in his role. I got a geeky kind of buzz hearing him speak out the lines from the amazing book, he even does the occasional voice over, such as for the ending that would have been satisfying if it were not so damn abrupt.

To be honest even at near two hours I did enjoy this film. I love the book of course, but this movie version surpassed my low expectations, you will get something out of this for sure if you have read Autumn. It is hard to say if it would be as enjoyable if you had not. Either way there are far worse zombie films out there for sure, and if not for the deranged fool in charge of editing this would have been a far better flick. As it is this is a faithful recreation and at the very least shows promise for what could have been.

Posted by Daniel Simmonds at 14:33