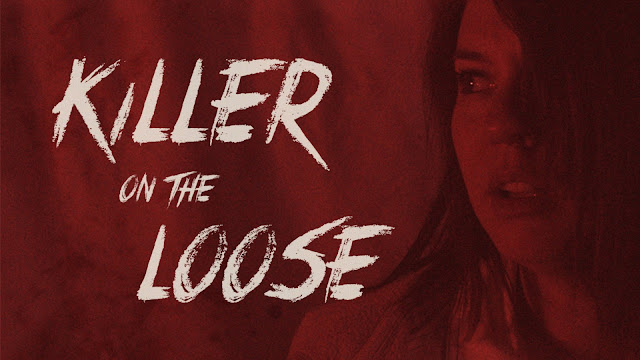 I first heard of this back in January of this year, as always it has taken me until now to get around to seeing it. The Witching Season is a free anthology of short horror films that is available to watch on YouTube. All the short films in the series are based around Halloween. So far there have been three episodes, one released every few months, the first of which was Killer on the Loose.

As the title suggests in this first short there is a killer on the loose, one that is pursuing a frightened young woman. She takes refuge in a random house but the masked maniac follows her, arming herself with a kitchen knife she hides and hopes for the best, but is everything as it really seems?

This fifteen minute short (written, directed, shot, and cut by Michael Ballif who is also the creator of The Witching Season) is well made and features some great direction and great use of camera work as well as light and shadow to perfectly ape the conventions of the slasher genre. At its heart this is a homage to the slasher films of the seventies and eighties and as such it doesn't try to set itself apart. If not for the fact this is a homage I would say it is very derivative and unoriginal, but instead it feels kind of like a lost scene from a Halloween film. The killer shown mostly in distance shots or obscured, wearing a white mask is very similar to the shape that is Michael Myers. The house the woman breaks into is playing a horror film, again similar to Halloween, lastly she is armed with a kitchen knife and takes refuge in a wardrobe. Then of course the killers face is covered by what is obviously a fancy dress shop version of the iconic Friday 13th hockey mask (in fact the very same type I own myself).

The short gets right into things, starting off and maintaining a feeling of paranoid terror, the title actually solved a lot of pacing issues as it tells you right away what is happening without the need for set up. There were a lot of sound based jump scares here, more than a few made me jump, on the visuals there is a bit of blood and violence but mostly it is a boiling pot of tension, you just know things are going to come to a head.

I was impressed with the quality of this first episode, Ballif is obviously a fan of the genre and understands what makes a good slasher. For me there was a little bit too much hide and seek in the house, but aside from that this is a great homage that features a predictable yet fun ending. I look forward to see what the rest of the web series is going to be like. Check it out for yourself below...