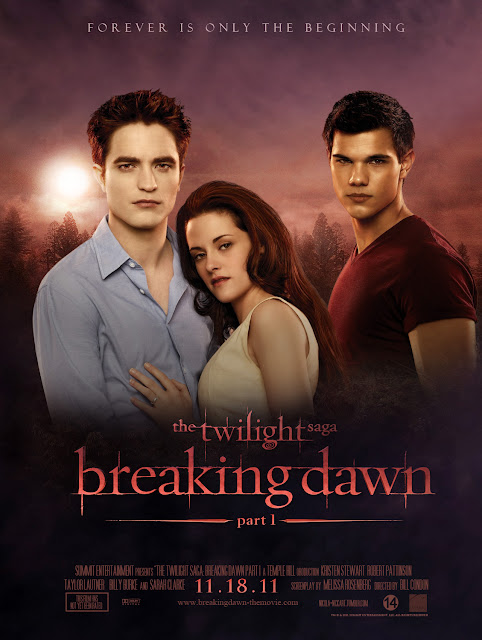 So I found myself watching the fourth in The Twilight Saga this evening and once again I find myself writing up a review for what many would argue is something not deserving of featuring on a horror blog, but which I feel does have a place. Spoilers for the other films are bound to feature.

Breaking Dawn starts a few months after the events of The Twilight Saga: Eclipse with Bella (Kristen Stewart) and her vampire boyfriend Edward (Robert Pattinson) getting married, something which really upsets werewolf Jacob (Taylor Lautner) who not only loves Bella, but fears should the two be intimate the vampire's super strength could kill the girl. So Edward and Bella go off on their honeymoon and indeed do get intimate but this results in a impossible impregnation. Now she has some sort of creature growing in her at a rapid rate, and the werewolf pack are determined at any cost to kill what they see as an abomination. 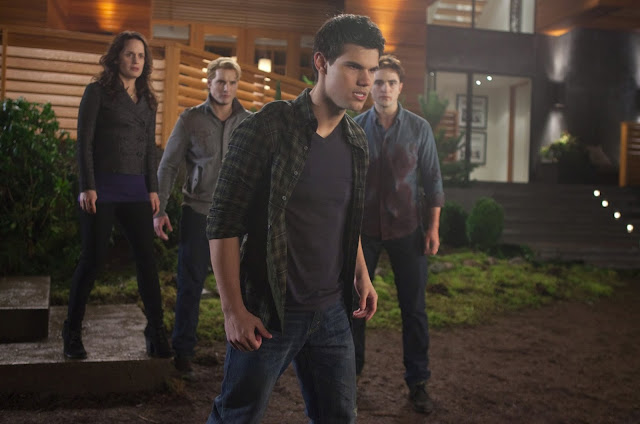 As with all the other films there is nothing really to inherently dislike here aside from all the main characters utterly miserable emo faces, Bella having the worst, it makes the brief seconds when people are smiling and laughing all the better, but it is an annoyance. The script as always is pretty bad, people spouting lines as if they are reading from a teens journal, but it is what I expected, too late in the series for that to end. As always Bella and Edward seem so ill suited to each other, constantly.

For the most part there is a lot less horror this time around, at least until the final third. Initially Bella has a nightmare about vampires slaughtering everyone at her wedding, but then the whole middle half devolves into nearly a romantic comedy featuring lots of sex scenes and little skits between the two lovers. The final third does pick up though, with the wolf pack in theory looking and sounding like an intimidating enemy (even if for the first time we get to hear their human voices when they are in their wolf forms, reminded me of Homeward Bound). The wolves do look vicious and determined which adds a lot.

The effects as always are not bad, a bit of blood, some tense if unimportant fight scenes, and Bella has effects on her to make her seem like she is on crack (all shrivelled up) effective enough that she became unpleasant to look at, especially one scene where it appears her back snaps! The directing is pretty neat at times, one scene with Jacob making an important discovery had some awesome editing that I can't think of how it could have been done better.

The plot is ok, I hate the way all these films based on books split their last one into two parts but I will reserve judgement as a lot of ground is covered here. It ends on a high that did make me want to carry on watching, though am sure it isn't going to blow me away. There is no real development with anyone with the exception of Jacob, there are so many characters by this point that many get limited screen time, such as Bella's Dad Charlie who felt like he needed more scenes, especially as he finds out about the wedding between films. 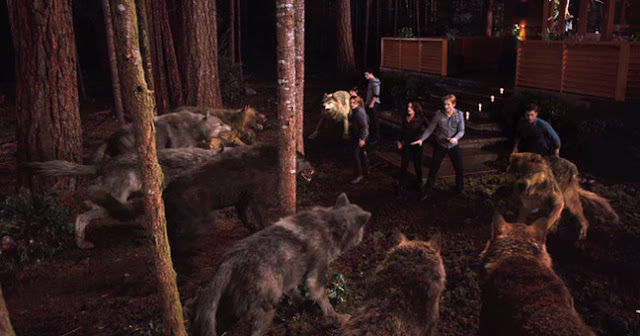 As always it is Twilight, so if your expecting po faced teenage drama crossed with a light dose of horror then you won't be disappointed, if your not then likely you will hate all the sparkly shenanigans.