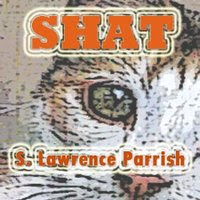 When S.Lawrence Parrish first contacted me to give Where Evil Grows; one of his horror audiobooks (that he narrates) a listen for review he also suggested a few others of his that included the novella Yog-Sothoth's Box, short story collection Chicken Pi: Twisted Tales, and a weirdly titled post apocalyptic book named Shat. It has taken me getting on for a year but I have now listened to the book and so here's my thoughts.

Shat takes place years after a catastrophic plague swept the world, this plague not only killed a huge chunk of the worlds population but it also affected plant life, changing the world into a barren wasteland. A cure was discovered that for unknown reasons resides in cat waste, and so the survivors must eat this to survive, it is also discovered waste from siamese cats can reinvigorate plant life. The book takes place at a human settlement named The Park where the residents find themselves at the mercy of an enemy army...or least that is what the people in charge want them to believe. Enter John Whistler who accidentally finds himself caught up in the machinations of the leaders of the settlement...

I believe Shat was one of Parrish's earlier audiobooks yet the quality is still here, his distinct voice as good as ever. A lot of the enjoyment comes through his style of reading, the voices he gives his characters and in Shat's case also with the sound effects used throughout. There are crashing waves, the meows of cats and gunfire all adding rather than getting in the way of the story. While not horror based this being post apocalyptic still means there is lots of interest to be gained, the world of Shat is not really as devoid of hope as usual end of civilisation stories, instead it is near the opposite, the world changing calamity is on the verge of being pushed back. This is a book of two halves, on the one side you have the story of John Whistler which combines a thriller with a love story, then co-existing you have the stranger of the two halves; the lives of the cats...

Humans and cats cannot understand each other but aside from that the cats in Shat are shown to seemingly have a similar level of intelligence to their owners. Many chapters are told from the perspective of John's cat Alex and his experiences with the park cats, and a female feline called Sasha. Either in this post apocalyptic world cats have suddenly developed their brains, or we are led to believe they have always been this way with humans oblivious to it all. Either way the cats are the stars of the story, both having an integral part plot wise as well as even being given the last action sequence, Parrish certainly seems to hold felines in high regard though on occasion it felt a bit odd, especially during cat love scenes.

The main plot is one of deception and subterfuge with the populace being led into fear and paranoia of the outside world. There are a whole host of characters most of which are easy to identify, you have Whistler and his girlfriend, the leader of the 'Core' Garrett and his army of barely controlled thugs, then you have the park people such as Waylon and Gainer, all bring their own parts to the overall story. Like a lot of Parrish's work there features explorations of homophobia, as well as plenty of grim descriptions, not least of which is people having to eat cat waste. There is plenty of extreme violence against animals, and even some nasty interspecies rape at one point, both of which are horrifying in an uncomfortable way. While the way the story went did feel at times pretty predictable the way it is narrated means it was quite interesting and soothing to listen to.

Shat is another solid audiobook from Parrish that while sometimes gets a bit unpleasant in the descriptions still features a memorable cast and a cohesive world. It is twenty three episodes long, each one roughly around thirty five minutes in length, and can be downloaded for free from a variety of places including i-Tunes.