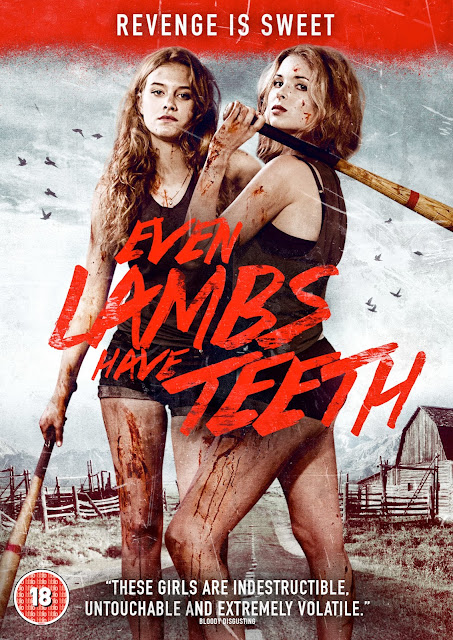 First of all I loved the title for Even Lambs Have Teeth, not only was it a memorable one but I could tell immediately it would likely be a revenge horror in the vein of I Spit On Your Grave and Bound to Vengeance, and indeed it was.

Best friends Sloane (Kirsten Prout from The Twilight Saga: Eclipse) and Katie (Tiera Skovbye from Supernatural) head out to a summer work placement in the deep countryside of America in order to raise money for a shopping trip to New York. While waiting for a bus in a rural town two young brothers befriend the duo and offer to take them to the place they are due to work at, However the girls are instead taken to the men's farm where they are drugged, they awake to find themselves chained up in shipping containers where they are to be used as sex slaves. From the film's title it is easy to infer that they manage to escape and decide to turn the tables on their sadistic kidnappers... 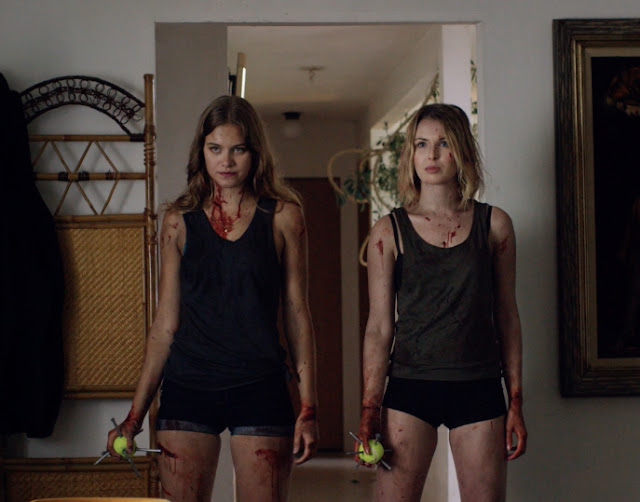 It all starts off so well, the girls personalities are displayed; first shown hanging with their friends, both cocky and full of the vigours of youth, then there is the building anticipation of the horror to begin which is announced perfectly with the movie's title card appearing on screen at the twenty two minute mark. This all leads to some nasty scenes during their capture with both girls being raped, even with this happening off screen it was not pleasant viewing, the characters both in obvious distress. Then there is a sudden shift and with their escape their characters do a complete 180 and suddenly start acting confident and head strong, this transition from victims to aggressors is instant, it felt like there was a few scenes missing and this jarring effect just never left me as once they have turned onto revenge they don't even seem like the same characters such is the difference. It is a shame this wasn't handled better as what felt like a horrendous horror story suddenly turned into a black hearted revenge fantasy with the girls wise cracking as they crack heads.

As a horror this falls apart yet despite the absolute silliness the film devolves into I guiltily admit to having fun watching this modern day Thelma and Louise get gleeful revenge on the idiots who had abused them, even if it is ridiculous. Blood effects are solid for what seems to be quite a low budget film, make up effects were also pretty good with a lot of implied violence used such as a man who gets a branch covered in rusty nails shoved up his backside (!) and someone chained to the back of a moving car. The acting is not the best I have seen, the bad guys don't have enough menace to them (and their teeth are all so white) while the two girls are let down by their script. Special mention has to go to Christian Sloan (Black Christmas) as the best of the bad guys, stealing the show whenever he appears (though wearing a pig mask is an easy way to draw attention). 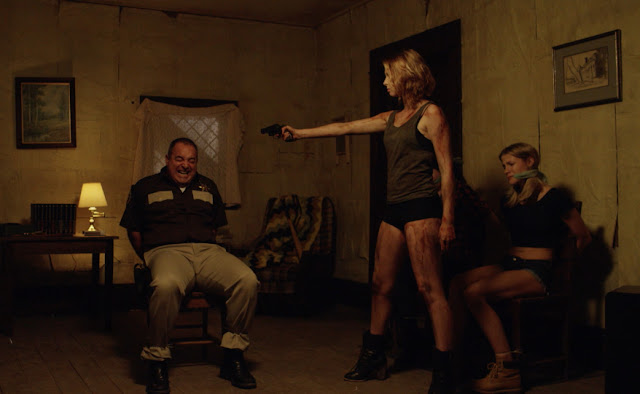 At times the low budget does become quite noticeable, especially the interior shots that not only pale in comparison to the beautiful scenery of the outdoors but are uniformly sparse and plagued with sound issues in the form of echoing voices. The plot is as simple as you would expect and unbelievable enough that my interpretation is that from the escape onwards the film we are shown is just all in the mind of one of the girls fantasising about escaping. Special mention has to go to the really lame sub plot that has a Detective uncle of one of the two exploring the small town looking for them, getting into all types of zany situations in the process.

With bad guys who don't quite manage to convince with their badness, a sudden mid film shift that removes all of the horror built up till that point, a variety of huge plot holes, and the sometimes average acting Even Lambs Have Teeth should be awful, yet I found myself enjoying all the female empowerment, and despite it's almost farcical nature the short snappy editing and great soundtrack won me over. Even Lambs Have Teeth is released in the UK on Digital and DVD on 13th June by Solo Media and Matchbox Films, check out the UK trailer below...