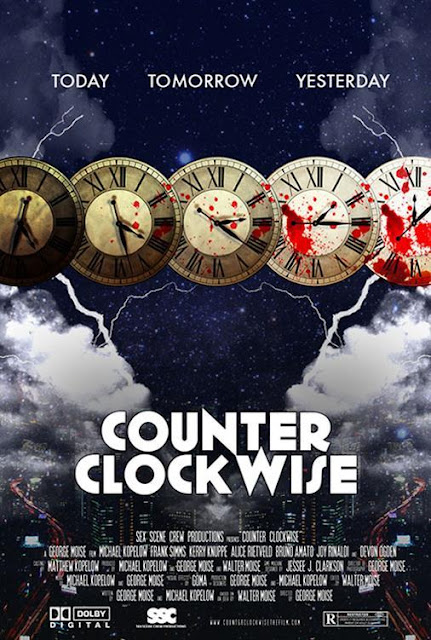 I love the notion of time travel and all the upsets it can cause, the way it can make your brain hurt with all the paradoxes and altered futures. While there have been plenty of great time travel films (Terminator, Bill and Ted's Excellent Adventure for example) there are not many that really scratch that horrifying itch of events spiralling out of control, off the top of my head just The Butterfly Effect comes to mind. Counter Clockwise is an indie sci-fi thriller/dark comedy that hopefully could be something special.

A scientist accidentally creates a time machine and is plunged six months into the future, but this is a future that is both sinister, confusing, and violent where he finds himself on the run both from the police (for the apparent murder of his family), as well as a bunch of hitmen. He decides to travel back in time to change history and to find out just what has happened to make his life such a nightmare...

The award winning Counter Clockwise stars Michael Kopelow (who also helped write it), Devon Ogden, and Kerry Knuppe and is due to be released by Artsploitation on DVD and VOD on 4th October later this year. The Artsploitation president Ray Murray says of the film "Totally inventive, fun, and complex. I immediately watched it a second time just to fully understand all the wild happenings!". Check out the trailer below and see what you think...