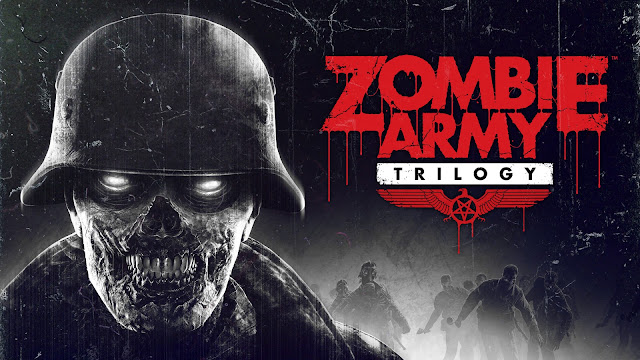 Nazi Zombie Army was a spin-off of the Sniper Elite series, originally it was released in two parts in 2013. Last year those two chapters along with a brand new third chapter were combined and released as Zombie Army Trilogy. I don't know why but I had it in my head this was purely an arena horde mode style survival game, I was both surprised and delighted to find it had a fully fleshed out story mode that is around ten hours in length.

It is nearing the end of World War II and Hitler desperate to defeat his enemies who are closing on his Berlin bunker from all sides decides to enact Plan Z. This plan involves using ancient magic to resurrect his Nazi army as flesh eating undead, it works but at a terrible cost, Germany is plunged into hell and due to not having the correct artifacts Hitler discovers he cannot control this zombie army. Playing as one of eight soldiers you must enter damned Berlin and search for a way to reverse the process that threatens to engulf the world... 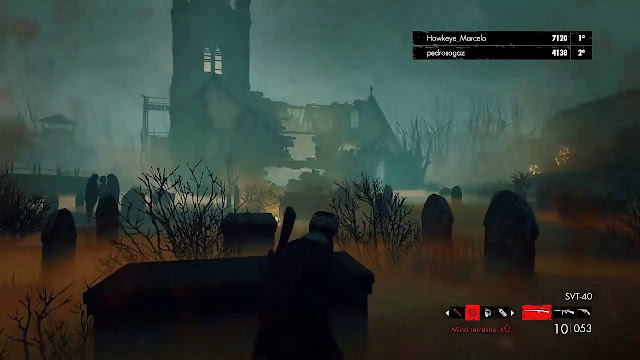 Each of the three chapters is made up of five levels and each chapter feels vastly different, not just in look but also in gameplay and level design. There is a noticeable leap in quality each time you start a new chapter which meant as I progressed the game just seemed to be getting better and better. The graphics are consistent with the older chapters being updated but there is more to do in the levels and they have more set pieces. For this review I shall give a brief over view of them.

Being based off of Sniper Elite it shouldn't come as a surprise that the sniper rifle is your main weapon of choice. Picking off zombies at a distance is always satisfying with headshots often triggering a cutscene that shows an X-ray view of your damage. You also get a secondary weapon that can be one of a number of machine guns and shotguns, while your third weapon is a pistol. You also have access to four different explosives, grenades are self explanatory, mines explode when an enemy walks over them, trip mines must be laid out first, while dynamite must be shot to ignite it. All of your weapons can be replenished from ammo crates and benches, usually found in one of the safe rooms (a device used to split up stages that made this feel very similar to Left 4 Dead). On at least a few occasions you are toyed with, entering what you think is a safe room only to discover it isn't. 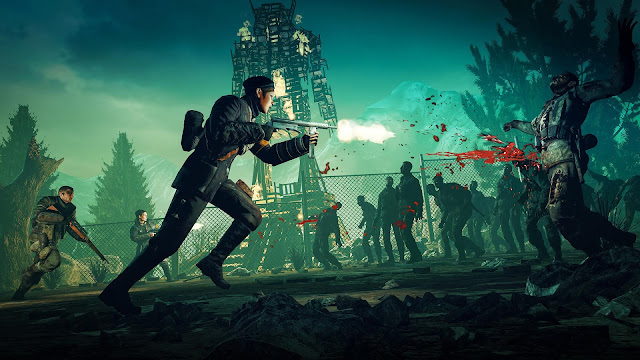 Part one is the most basic, aside from an introduction there is not really any story here to speak of, occasionally you hear some radio broadcasts but they are few and far between. Even in this early part you can see the inventiveness that keeps Zombie Army Trilogy feeling fresh. Starting off in a village area you soon head into ruined Berlin that includes docks, a huge library and an underground bunker system built into the rocks that was surely heavily influenced by Day of the Dead, even the synth based music sounded similar.

The format of chapter one is usually that you get enclosed in an area and have to fight back hordes of undead until the check point marker comes up, I found the methodological picking off of grunts to be quite satisfying though you cannot deny it does get a bit boring at times. Mostly it is zombies but there are also skeletons, sniper ghouls and a large machine gun toting super zombie to contend with. There are a few bosses but they are both identical to fight and just spawn enemies rather than attack you directly. 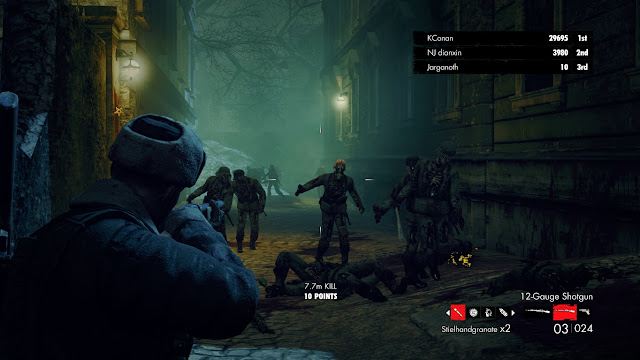 Part two immediately feels more polished with better, more interesting level design and more variety in the enemies you face. New locations include a museum, train yard and gun tower but it is level 2.3 that really shines. Starting off in a department store your battle leads you through a field hospital and eventually below the German Chancellery where you enter Hitler's bunker that with it's hordes of corpses and barbed wire feels like Hell on Earth, was so much fun as it just seems you never know where you are going to end up next. New enemies include psychic zombies who constantly summon the dead as well as a large flaming zombie. Each of the many save rooms now have audio diaries playing which help immerse you more in the story, and there are more turret sections than previously (chapter one just had the single time).

Part three being made for the 2015 release feels by far the strongest part, levels now have set pieces such as collapsing buildings and there is just more detail everywhere you look, from posters on walls to more variation in locations and set dressings. You now get side quests offered while the story happens outside of save rooms with friendly A.I who talk over speakers at you, best summed up with a fantastic battle in a hospital that includes zombies being operated on, climbing out of furnaces and sat in wheelchairs. Level 3.2 was the most fun featuring a frankly awesome train section that had you battling through the carriages. There is a strong forest section complete with saw mill, a fortress, and finally Hitler's zombie factory where you get to battle the ultimate evil himself! New enemies here include a variety of heavily armoured foes as well as a chainsaw wielding super zombie that brought to find Resident Evil 4. 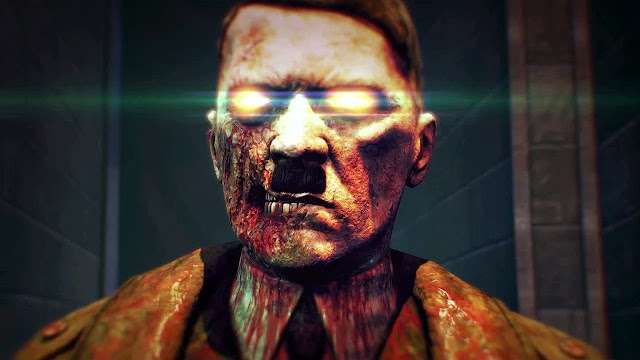 The games locations are certainly varied but the same can't be said of what you do, it is mostly a kill everything in sight type game and can feel a bit stale at times. There are switches to pull and the occasional item to find to spice things up, and by the later stages it is no longer compulsory to kill everything that made the game seem more fast paced. Sometimes it can get frustrating, especially with the suicide ghouls who charge towards you and then explode (strangely hard to hit). Zombie Army Trilogy can be played with up to four people, I did it solo so I expect as with everything more people equals more fun. There is a strong horror vibe on show here with corpses everywhere, as well as nightmare sequences, rivers of blood and the perfect synth based soundtrack that was probably the best part of the game. Each level has it's own set of hidden collectibles and there is a separate horde mode to play outside of the main story.

This may not be for everyone due to the repetition but there really is not much more fun things to do in life than shoot Nazi zombies so I had a literal blast, plus you get to kill zombie Hitler which is always nice. The way the quality increases over the games life span means I was constantly being impressed, it is nice that each chapter felt so much better. Apart from a few frustrating moments and a really bare bones plot I loved Zombie Army Trilogy so would recommend it.