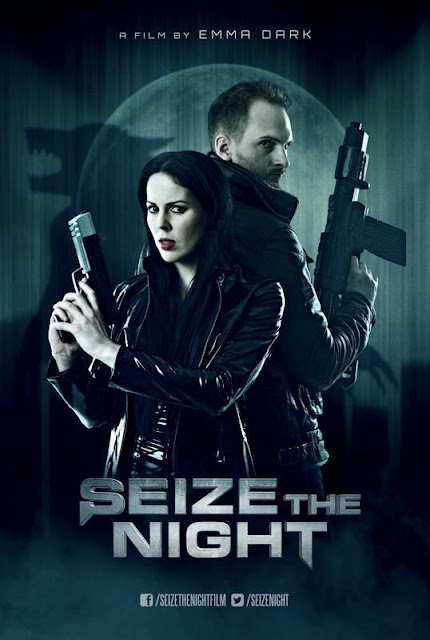 Seize the Night is a short indie action/horror film that has now been released on Vimeo. The film has won Emma Dark (who produced, directed, edited, and stars in the short) a MMBF Rising Star award at Ireland's The Yellow Fever Independent Film Festival, as well as being featured on a variety of film websites and magazines.

Dark stars as renegade vampire assassin Eva who has recently escaped from a secret bio-research facility and is looking to get bloody revenge on those who put her there. On her search for vengeance she learns of a pack of werewolves led by Tobias (Carey Thring) that are hunting her, so she decides to turn the tables on them...

With the dark blue murky lighting, werewolves, vampires and lots of leather coats I was instantly reminded of the Underworld films, Dark's role seemed like Kate Beckinsale's in those films though maybe with more attitude. I only saw the first Underworld film and didn't think it was great, but that concept reduced down to a twelve minute short I can put up with. I loved the English accents of the vampires and werewolves and had no complaints with the acting. For an indie film this is very slick looking and feels high in quality all the way from the soundtrack to the look of the thing.

While this features vampires and werewolves this is very much an action short. In the run time there are a few fast paced fight sequences that benefit from being coordinated by Hollywood stunt man Ray Scammell whose fight coordination credits include Alien, and A Clockwork Orange. Monster effects are limited to fangs for the two sets of creatures but look pretty great, you do get to see a shadow of a werewolf transforming which was cool. The VFX effects are great for an indie film, not the best ever but they certainly do the job. There is a lot of plot stuffed into this short, a lot goes on in a short time frame so probably not surprising I got slightly lost, again impressive though.

While vampires fighting werewolves isn't really my thing (aside from What We Do in the Shadows) you can't deny the level of quality on display here. Seize the Night is free to watch on Vimeo, I will include the video below, it is also going to get a limited DVD release so look out for that if you like what you see.

Posted by Daniel Simmonds at 12:08