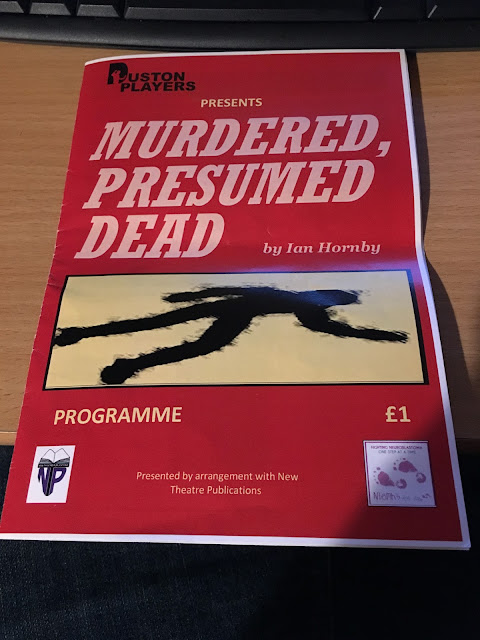 So a bit of a weird blog post in that I am going to review a play I saw that was playing at the Duston Community Centre in Northampton. The play is put on by the Duston Players who are an amateur group and so with that in mind there will be some leeway.

After finding her husband John (Time Dwelly) in the arms of her supposed best friend Carol (Sarah James) Lynne shoots him dead. Being a pretty nasty woman Lynne blackmails Carol in to helping her cover up the murder, also enlisting the help of a shady P.I named Ronnie (Alastair Way). All seems to be going to plan until that is John shows back up, but as a ghost that only Lynne can see. From this point there are many, many twists and turns, is everyone as they really appear?

I had not planned to review this but the arrival of a ghost kind of forced my hand, it was easy enough for a ghost to be on the small stage as reasons were given for why he was solid and not really looking like a dead man at all. The play was split up into two halves, the first being about the initial murder and the subsequent haunting of Lynne by her victim, the second half being a series of double crosses and escalation which was far more entertaining.

I understand that these are not proper actors, that they are all amateur  but that still couldn't fix the issue I had with the actress who played Lynne, sure she had the most lines but every other minute she would pause, having forgotten what she was meant to say, the prompter loudly whispered her lines to her on so many occasions that it became slightly farcical. This was a shame as when she did know her lines she did as good a job as anyone else really. The excuse of her having the most lines cannot really be used though as in the second half where she only had a few she still needed prompting at one point. This was a shame as while the acting was all over the top (the style required for a play) it was mostly fine enough.

The play itself wasn't that badly written, lots of angry people talking  loudly at each other, the first half was far less interesting, the second half was more action packed and funny. There are odd parts where a character who is pretending to be someone they are not continues to act that way even when no other people are on stage, seemingly just to try and trick the audience. It kind of felt like a lost episode from Tales of the Unexpected. The set itself was a small living room but it did the job fine. There were a few gun shots during the piece, these always had a very loud sound effect occur well off stage so that was pretty distracting.

Overall Murdered, Presumed Dead was kind of ok, issues with someone forgetting their lines was quite an annoyance and the play itself wasn't too exciting until the second part, it led to a fun ending but overall I kind of expected better.