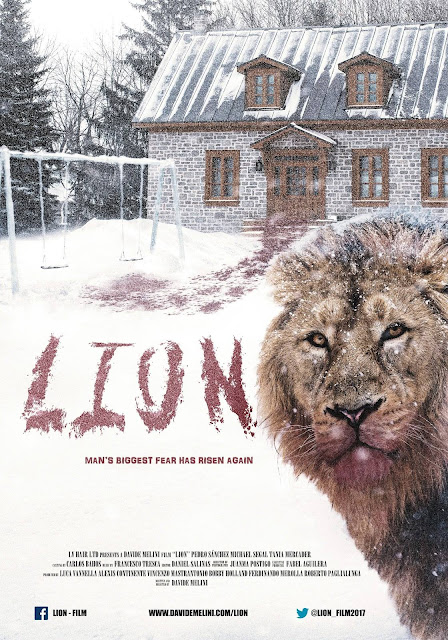 Davide Melini (director of short horror films The Puzzle and The Sweet Hand of the White Rose as well as trainee assistant director on the Penny Dreadful TV series) has a new horror short coming out that he has written and directed; Lion. The film, filmed in the UK is currently in post production with an aim to release it this Halloween.

From the teaser trailer (included below) it seems an abusive husband and father meets his comeuppance at the hands of...a lion, maybe? The synopsis I was provided with states "An isolated chalet in a snowy forest...A man blinded by alcohol...A woman unable to rebel...And an 8 year-old child troubled and dark...The silent night is broken with cries...The start of a terrible nightmare!". It certainly sounds interesting enough and the teaser does a decent job of showing promise for the full short.

Lion stars Pedro Sanchez, Michael Segal (Anger of the Dead) and Tania Mercader and some big names have worked on the short. It has been produced by Luca Vannella (Thor, Harry Potter), Alexis Continente (Thor, Penny Dreadful), Vincenzo Mastrantonio (Titanic), Bobby Holland (The Dark Knight Rises, Game of Thrones), Ferdinando Merolla (Hannibal Rising), and Roberto Paglialunga. Check out the teaser below and see what you think, as always I hope it turns out to be great as there can never be too much horror.